CES officially opens today, though there were a bunch of events last night. The doors open to the show floors in a bit, but I have a little time to get down some random observations. And these will be quite random, and thoughts pop into my head about some things that stood out, for one reason or another.

One, for example, was tiny thumb drive from Kensington - actually, smaller than a thumb, about the size of a thumbnail - that was a standard USB drive, but if you flipped the plug, it became a micro-USB which lets you plug it in as well to a Smartphone or tablet, making transferring of files very easy.

HP had its Stream 7 Windows tablet, which retails for only $99, and includes a free year of Office365, which is a $70 value! I tried to get one to test before the holidays, but hit a brick wall, though the HP folks I met insisted they'd be sending one for me to test. My very brief look showed it to be extremely solidly made and appears to be a remarkable deal.

Lenovo has an intriguing twist on its own 7-inch Windows tablet, an application they call "AnyPen," which only adds $20 to its standard tablet and seems well-worth it. It eliminates the need to have a special digital pointer to carry around for writing on the touch screen. Instead, utensil that's either metal or graphite will work - a regular pen or pencil, for instance. Or even a fork! (Yes, they had one there to demonstrate.) I like Lenovo products and have written positively about their Android tablets and Windows devices. The downside here, though, is their Windows line is not on the low end, and this AnyPen version costs $299 (though, also, includes a free year's subscription for Office365).

Last year I wrote about a product called DoorBot, which has been rebranded as Ring. This a doorbell and camera that connects via an app that lets you see on your Smartphone who's at your door. There's a wide-angle fish-eye lens, which can be controlled, and also now includes motion-sensor technology. The advantage of the Ring over more traditional like-devices is that you can access the camera from wherever you are, anywhere in the world. Not just from a monitor in your home.

Speaking of doors, the well-known lockmaker Schlage, has a presence at the show. One of their new devices is a voice-activated lock, no key necessary. (Though it comes with one in case the battery runs out. No need to carry it around, however, since the screen display will warn you when the battery is low.) 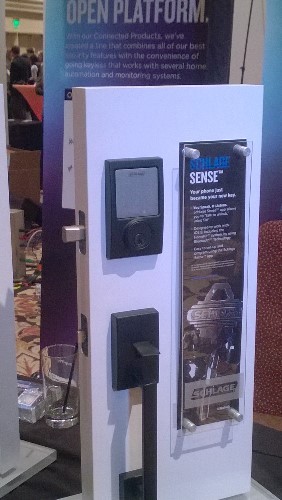 I came across another company making glassless 3D, a Chinese group called Super D. It's only for tablets and SmartPhones, though, unlike the oft-mentioned here Stream TV Networks which is making its Ultra-D technology for licensing to television (with tablets et al in the works). The 3D quality of Super D was terrific. A few caveats must be mentioned though. It uses an optical sensor to adjust to the person viewing. That means it's only for one person viewing at a time, and if you switch to another viewer takes a bit to readjust.

I'll write later about Stream TV Networks after I get to their booth, though did get a chance to see some of the games being developed directly for their glassless 3D. It worked very well, one game was notably better than the others, but there was a substantive senses of depth to them all.

I was also intrigued by a product from BitDefender, which makes well-regarded anti-virus software. Their hardware device, Box, protects all your Smart devices at home from viruses. It turns out that any Smart device is susceptible to viruses, even if it's not all that common today, but that could change as they become more pronounced, especially as "connected homes" increase. Things like a Smart TV or Smart thermostat are vulnerable. They mentioned how there was a case recently of a Smart refrigerator getting infected and actually sending out viruses! Anyway, the point here isn't how prevalent the problem is at the moment, but how elegant and easy the Box is to use. You plug it into your router and then...well, there's no more "and then," that's it. At that point, any device in your home connected on your network is protected, including your computer. It retails for $199, and then costs $99 a year for the annual subscription. (Remember, this is an anti-virus device, so like any anti-virus products you need to subscribe to keep the database current.)

What also stood out is how many "connected home" products I saw. Clearly this is a new, hugely booming market.

One other home-related product intrigued me, if one has a pet. It's the PetNet, which lets you set a time to feed your pet and how much food. You configure the device (or can set it from anywhere with the app on your Smartphone), and then at the pre-determined time, a drawer opens with the amount of food you decided on. (There's more, like it can make a determination on the amount of food your pet needs depending on the information you input.) It's in beta now, but expects to be for sale in perhaps three months, for $250. 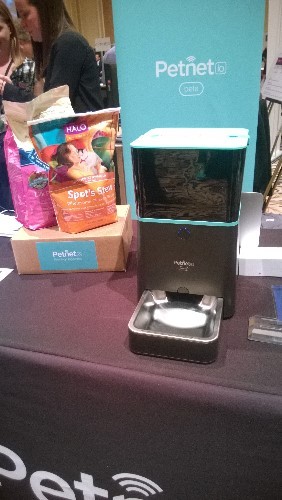 I was also intrigued by a very small laptop charger, the Zolt, than can replace the much bigger, heavier "bricks" that come with laptops. (It's not a portable charger itself.) It also has USB ports than can be used for charging.

At an event for start-ups put on by ShowStoppers, I came across the Hush "Smart Earplug." Yes, earplug. This is largely designed for couples where one person snores loudly, though it isn't limited to that. What it does is mask the sound by playing sounds from your Smartphone, which you can adjust with an app. (It's not noise cancellation.) It's a clever idea, though at $149 might be a bit pricey compared to, say, stuffing cotton in your ears...

And then...well, there was a lot more, and there will be far, far more ahead. But for now, I think I have to conserve my strength as I prepare to dive in to the first day.