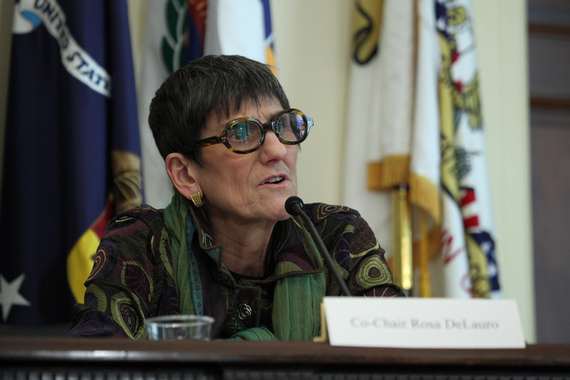 A proposal tabled by Connecticut Rep. Rosa DeLauro last week may give the Committee on Foreign Investment in the United States (CFIUS) a much wider mandate to review foreign transactions. DeLauro hopes that from now on, as well as evaluating the national security implications of foreign investment in US companies or operations, CFIUS should take on the rather more substantial job of reviewing proposed M&As and determining "whether such [a] transaction is of net benefit to the United States." In practice, this means that CFIUS would be able to consider the impact of any proposed deal on employment, product innovation, public health and safety and consider factors such as whether a foreign entity purchasing a US company abides by US rules concerning disclosure and transparency.

That's all well and good, but if CFIUS is to have its powers bolstered, there is one other area that ought to fall under its scrutiny: the environment.

In the wake of the COP21, world leaders have conceded that action must be taken if, in the words of President Obama, we are to "save the one planet we have." Among the recommendations made in the summit held in Paris in 2015 were the limitation of greenhouse gases emitted by human activity to the same levels that trees, soil and oceans can absorb naturally (beginning at some point between 2050 and 2100), reviewing each country's contribution to cutting emissions every five years and for rich countries to help poorer nations through the provision of "climate finance" to adapt to climate change and switch to renewable energy.

Applying the recommendations of the COP21 entails a major paradigm shift for businesses. In the boardroom, the environment needs to start taking a seat at the top table. It can no longer be seen as a 'nice-to-have' CSR issue but needs to be afforded the same primacy as issues such as profitability and market share. In the future, businesses have to start measuring success not just in terms of share prices and bottom lines, but also by how well they mitigate their impact on the environment.

But, of course, this isn't a behavioral change that will happen overnight. This is especially true since a 2010 UN report showed the world's biggest corporations would lose more than one-third of their profits if they were to be held financially accountable for the damage their expansion has caused to the environment - estimated then at $2.2 trillion. The report's argument is that, in the short term at least, what is needed are sticks as opposed to carrots: abolishing subsidies for harmful industries, instituting tougher regulations and imposing more taxes on the companies that do the most harm to the environment.

Luckily, CFIUS has the potential to be one of the most effective sticks in the US arsenal.

For CFIUS is no toothless entity. The number of cases it handled rose by a third in 2015. Only last month, it shut down a proposal from Chinese state-controlled technology group to become the major shareholder in data storage group Western Digital and was the catalyst for the withdrawal of Fairchild Semiconductor Inc from a deal with China Resources Microelectronics Ltd and Hua Capital Management Co Ltd. And impending deals, such as the acquisition of Swiss seeds and pesticide maker Syngenta by China National Chemical Group, could well yet find themselves blocked by the multi-agency body.

Understandably, then, there are many who would not like to see it extend its reach. Others argue that tweaking the jurisdiction of CFIUS represents a serious case of mission creep and government overreach. After all, it was developed to protect US commercial interests, not to try and save the world. Yet there has always been an ethical bent to any government's scrutiny of M&As, which have been analyzed and scuttled because of the way they might warp competition through the formation of monopolies and cartels, or through other practices that might have a negative impact on consumers or employees.

At the same time, even corporations have been forced to improve their ethical standards. The model espoused by supply-side economists such as Milton Friedman, who believed that multinationals should only be legally accountable to their shareholders, has been largely discredited. And, as BP or VW found out the hard way in the wake of the Gulf of Mexico disaster five years ago and last year's "defeat device" scandal, even shareholders want profitability to be offset against environmental due diligence and responsibility.

As the world changes, priorities change with it. Adding environmental concerns to the list of issues that come under the watchful eye of CFIUS is not an outlandish idea. Indeed, M&As inevitably lead to businesses enjoying economies of scale and greater corporate power. With this power comes great responsibility - responsibilities that they need to be firmly encouraged to fulfill.

Take the record-breaking, $43 billion Syngenta-ChemChina marriage. An expanded CFIUS would frown upon the proposed tie-up given ChemChina's murky track record of violating emissions regulations as well as upon the prospect of expanding the reach of Syngenta's environmentally disastrous line of Atrazine-based pesticides. The megamerger would also run afoul of CFIUS it the committee were looking at the "net benefit" to the United States, since farmers would be beholden to a conglomerate that has caused already caused $6 billion in damages to American corn producers.

COP21 was a warning knell. If corporations won't make changes voluntarily, world leaders such as America need to implement changes that will make working in an environmentally friendly way "the only game in town". Indeed, adding such powers to the remit of CFUIS could be a very effective way of helping the Chinese Ministry of Environmental Protection persuade its industries that protecting the environment actually makes good business sense - especially pertinent given the fact that for the third year running, China topped the list of countries coming under CFIUS scrutiny.

Money talks, and it has been monopolizing the conversation for far too long. Expanding the remit of CFUIS is just one way the US government can help give the environment a voice.