We plan. We hope. We make choices that will lead our lives to fulfill the image of the future we have seen a thousand times in our mind’s eye. Yet life rarely turns out the way we expect it to, giving us greater gifts and fulfillment in ways we ourselves would never dare dream.

This is the story of Chad Argotsinger, a 38-year-old college administrator, and Jeff Shorey, a 44-year-old registered nurse, who met 6 years ago, fell in love and began their journey towards building a family. As they began to look at options with surrogacy, a clear picture began to form of the two parents with their new child living the American dream in their New England world.

Both had been in relationships before meeting each other and it just never seemed like they were with the "right" partner to begin a family. But quickly after Chad and Jeff began dating, they started to feel that each other were someone they could raise a child with. 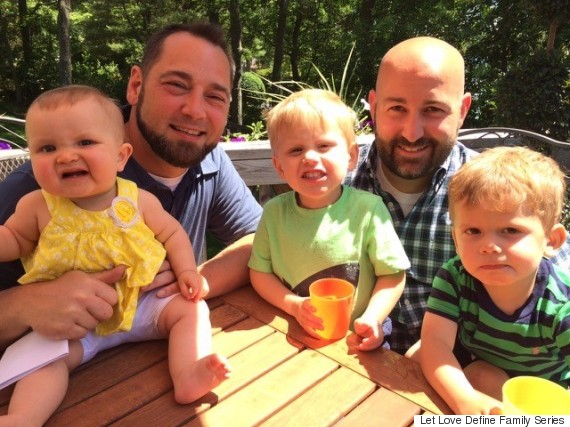 The more they researched and examined the cost of surrogacy, the more they began to look at the foster care and adoption world. Chad’s mother had been a social worker and, growing up, he was aware of others in need, especially kids that needed a home and some hope. This led them to the Massachusetts Department of Children and Families. All of their social workers had been great to work with and they questioned whether there was a stigmatism in the system toward LGBT parents. Chad explained, “The social worker was very honest with us that there were some old-school foster families that have a hard time with it, but they don’t make the decisions and there are no issues within the DCF about gay couples.”

There was quick agreement that they wanted two children. “I’m one of four children and Jeff is one of two, and we both enjoyed growing up with our siblings,” according to Chad. “We started to plan for two children, and never really entertained the thought of having any more.”

The two took an adoption class, started the process to buy a bigger home and waited for their social worker to find the right match for their family. “We met kids that were wonderful and perfect but, for whatever reason, just didn’t work out,” Chad said. "Then we heard from a social worker about two brothers who had been separated and were living in different homes. Something about their story resonated with us and we both wanted to explore it further.” The brothers had lived a short time together but were put in separate homes when they entered the foster care system. It was heartbreaking to know they had started to grow up together, only to have to spend their childhood apart.

As they continued to learn more about the family, they discovered that not only were there two brothers but also a two-month-old baby sister. The social worker was looking for parents that would be willing to take all three children. Although Jeff and Chad weren’t initially looking to have three kids, the more they learned about the children the more they realized that without them, these siblings may not grow up together or ever even know about each other. Something in their story connected with Jeff and Chad. Their expectations of two children faded as they faced the reality of bringing brothers and sisters together under one roof.

Luckily, the couple had discussed wanting a boy and girl and this situation allowed them that. It all just fell into place for them as they closed on their new house, and within a month they met both of the boys and the brothers: Jonathan, three years old, and Ray, nineteen months, moved in. They had to wait a while until Brynn, 9 months old, became part of the family, and this was the first time that the brothers realized that they had a baby sister. 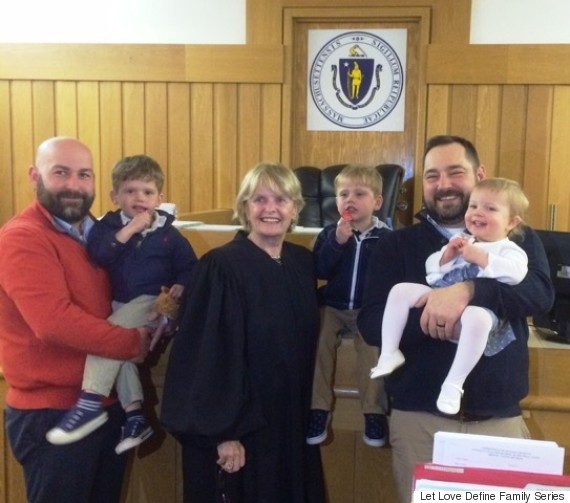 Daddy Chad and Daddy Jeff have settled into family life, and still deal with a society adapting to LGBT families. On a recent trip to register Ray for preschool, all the paperwork still reads “Mom” and “Dad,” so Chad simply scratched out “Mom” and put “Dad” and Jeff’s name. But, overall, they both feel that their community has been very accepting and that it will take time for things to fully change. Their main focus now is raising three kids.

Jonathan has an amazing vocabulary and is extremely polite. “The things that he says just blow us away -- he knows about things that we never really talked about. Not sure where he picked it up, but he is so smart,” beamed Daddy Chad.

Ray wasn’t much of a talker at first, but as he has settled into his new family and new life he has become more vocal and energetic -- definitely the hardest to put to bed! He has become the most vocal and is always saying, “I love you, Daddy!”

Both boys love to spend time on their bikes when they’re not watching monster trucks on TV.

Brynn is the dream baby: she rarely cries, always smiles and is so lovable to her brothers and the family dog as they snuggle together on the floor. She is already looking up to her brothers -- she follows them around the house and wants to do whatever they are doing. 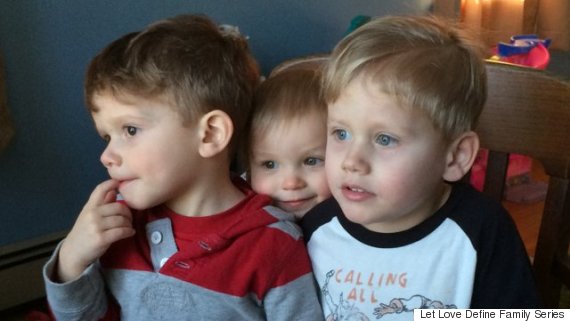 “The most surprising thing,” according to Chad, “is we had no idea who these kids were. Then we met them and we were a little scared if there would be a real connection, but there was never a moment of hesitation with these kids and they latched onto us and loved us back.”

Jeff summed it up best: “It has been such a wonderful experience, and even though we thought we could only handle two kids, neither of us can imagine our lives without all three of our kids. Life has given us a greater gift than we were asking for, and we’re so grateful.”

On Sunday, June 21, 2015, RaiseAChild.US and The Pop Luck Club celebrate Father’s Day with the 5th Annual Father’s Day Brunch at The Abbey in West Hollywood, CA. Information is available at www.RaiseAChild.US.