A South Georgia deputy sheriff who was photographed dressed in blackface and inmate stripes at a Halloween party has been suspended without pay.

Chad Palmer, a 15-year veteran of the Camden County Sheriff's Office, allegedly told people at the private party that he was dressed as a Camden County inmate, and he was "picking cotton" in the photo, First Coast News reported.

Palmer's face and arms are painted in the photo, and he is wearing "jailbird" stripes. 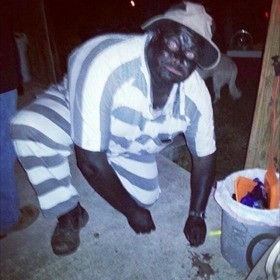 Deputy Sheriff Chad Palmer was suspended without pay over this photo.

The racist photo was shared thousands of times on social media, where it sparked outrage and led to a disciplinary hearing. Finally, on Wednesday, Palmer was suspended without pay.

Camden County Sheriff Jim Proctor told the Florida Times-Union that he was "shocked" when he saw the photo of Palmer, but said that the officer did not fully understand the costume would be interpreted as racist.

“He thought it was funny. It was a costume party,’’ Proctor told the newspaper. "... [But] it showed a lack of judgment and sensitivity."

Although Proctor said Palmer is now deeply sorry for his actions, the suspension will stand until the officer completes sensitivity training.

Proctor said that there is no evidence of race bias in Palmer's work, noting that the officer had filed criminal charges against 187 blacks and 356 whites, WSB-TV reported.

However, the outrage caused by the photo isn't likely to subside soon.

"Out of all of the characters that this police officer could have chosen, he chose to go as a slave, an inmate, picking cotton," Pastor Mack Knight told First Coast News.

"When you are a law enforcement officer, you should hold yourself in a better position than that," Camden County resident Barbara King told WTEV. "To get at a party and discriminate against any inmate, any human being. Something needs to be done."