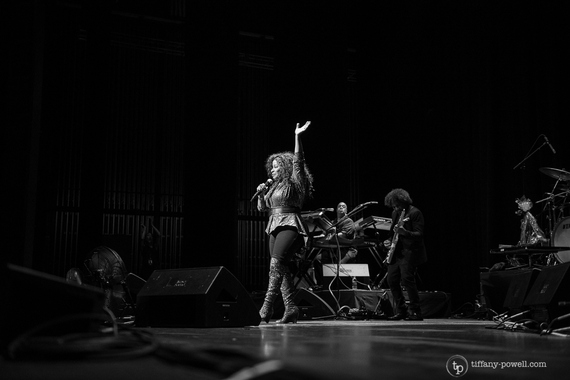 The electrifying sound of the singer Chaka Khan has been a familiar voice on the airwaves since she
first burst onto the scene with her raucous version of the Stevie Wonder song "Tell Me Something Good," which she performed with the group Rufus back in 1975. Ms. Khan can sing a melody, but it is her gutsy delivery and her ability to hit and hold high register, combustible screams with an intensity matched by few others that has set her apart. Over the years, this now sixty-three-year-old grandmother who can still strut it with the best of them, has consistently produced hits, garnering a total of ten Grammys and over a dozen other nominations in the process.

Ms. Khan is not without her jazz credentials. She made her forays into jazz with an early album titled Echoes of an Era from 1982 where she played standards with a band made up jazz giants Joe Henderson, Chick Corea, Stanley Clarke, Lenny White and Freddie Hubbard. She also did an enjoyable pop/jazz album in 2004 titled ClassiKhan where she played with a studio jazz group and was backed up by the London Symphony Orchestra. Her funky 1991 "I'll Be Good to You" was a Grammy winning duo produced by Quincy Jones and featuring the inimitable Ray Charles. She showed moxie in 1989 joining legendary trumpeter Miles Davis on stage for Michael Jackson's "Human Nature" at the 1989 Montreux Jazz Festival.

Throughout her career, however, the singer has had her difficulties with substance abuse. After the recent death of her friend Prince, she publicly announced she was entering a rehab program with her sister for her addiction to pain medications.

Ms. Khan's return to the Cobb Performing Arts Center this past Friday was the restart of her previously postponed summer tour and I'm sure there was some trepidation, but the nearly sold out crowd couldn't have been more welcoming to the singer. Her band was made up of her musical director Melvin L. Davis on bass, guitarist Rob Bacon, keyboardist Tracy Carter, keyboardist Jessie Millner and the ubiquitous drummer Ronald Bruner Jr.. Backup vocalists Tony Scruggs, Audrey Wheeler and Tiffany Smith lent important support throughout.

The band opened with "Do You Love What You Feel" laying down the groove to the Rufus classic that had Ms. Khan coming out in a shimmering black outfit, knee high boots and that famously wild mane of hair. Ms. Khan waved and threw kisses to the crowd as she came on stage. You could sense she was feeling her way through the first song as her voice seemed a bit tenuous and somewhat off key, but her backup chorus did an admirable job carrying her water vocally until she got her bearings.

Like a true professional Ms. Khan charged ahead with "Feel for You" her 1984 hit that was written for her by Prince. She slowed it down a bit resurrecting her 1980 hit "Papillion" gaining a bit more confidence with each passing song. There is no doubt this woman can still sing and she showed no indications that her ability to reach and hold her powerful vocal range was compromised, although in truth at times her delivery was sometimes slightly ahead of the band.

The program proceeded with "What cha going to do for Me" another song from her days with Rufus, which had the revved crowd standing, dancing and singing to the music. You could feel the love that the audience sent Ms. Khan's way and she received it gratefully, at one-point affirming to them that "God was good" and that she was glad to be on the other side of her experience.

The concert continued with her hits "Everlasting Love," "Love Me Still" (which she strangely commented she wrote with an idiot-her co-writer on this was Bruce Hornsby) and "Sweet Thing" which again had the crowd dancing in their seats.

At this point Ms. Khan went off stage for an extended break and the band played an instrumental version of her 1985 hit "Through the Fire" with ardent vocals by the three powerful singers Ms. Scruggs, Ms. Wheeler and Ms. Smith. Still without Ms. Khan, the band then went into an ill-advised, but perhaps necessary, improvised funk version of Dizzy Gillespie's "A Night in Tunisia." They used an extended vamp, each member of the band given too much time to individually solo to no apparent point. At one point a vocoder/guitar section by Mr. Bacon had me thinking I had been catapulted back in time to a drug induced Peter Frampton concert. Gratefully Ms. Khan returned in another outfit and proceeded with a tenuous version of "My Funny Valentine" which nonetheless reconnected the audience

The crowd endured, there was no way they were going to give this woman anything but love. This was as much about redemption as it was about music. It was as much about supporting a longtime friend as it was about listening to the music that you grew up with; and what music she has given us. Ms. Khan responded with" Tell Me Something Good," the song that catapulted her to fame over forty years ago. This one was the one everyone had been waiting for and it got the audience singing along, dancing and clapping wildly. She finished the set with her 1978 hit "I'm Every Woman" and was called back on stage to receive an award from the City of Atlanta naming Friday August 5, 2016 as Chaka Khan day in the City. The crowd erupted as she did her encore singing her 1983 Grammy winning hit "A'int Nobody."

Ms. Khan is well on her way back to full strength and reclaiming her status as one of the finest R & B singers of our generation. She will be continuing on her tour with stops in Atlantic City, NJ, Houston, Tx and Asheville,NC.