Four days of dust, heat, masses of tripping festival-goers, thumping never-ending bass, welcoming random visitors from around the planet, various combinations of food, munchy snacks and refreshments, sleeping in cars, handing out flyers, swimsuits and bare feet without a beach or pool in sight, strange Coachella restrictions (more on that later), plethora of Jews and tattoos, conversations about the meaning of life, donated day-old challah and bagels, jugs of wine, $10 ice, too much kugel, Do or Die Mordechai the New York City Bar-Mizvah DJ, dead car batteries, flying canopies, road apples, porto-potties from hell, nice showers and much more. 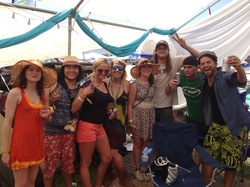 Don't get me wrong. I would do this again in a heartbeat. The Shabbat Tent always creates a community of Jews and their friends that is unquestionably unique. Shabbat Tent reaches back to the days Abraham and Sarah. A tent open on all sides. Accepting of everyone no matter what their background. We entertain folks from all walks of life. From successful business people, to wandering lost souls, from artists to librarians. Some had a Jewish upbringing, some not, some are former Lubavitchers, some left Judaism after their bar/bat mitzvahs, some belong to Jewish fraternities, some are sheltered orthodox students peering sleeping in a tent for the first time.

This was our first serious attempt to make Shabbat at Coachella. Its a major investment of time, people power and resources to pull together in order to create a massive 30 foot-long tent that serves food around the clock in a sea of other tents. It required a caravan in the middle of the night from Los Angeles, arriving at the venue at 5 a.m. the day before the festival even begins.

Shabbat was memorable. We gathered with a diverse group of souls for Kabbalat Shabbat singing. Then we made a group Kiddush over wine brought in a plastic jug, and Hamotzei over delicious challah. We served a Shabbat Lunch, and pasta salads all-day long. We made Havdallah at 1am. We all consumed tons of challah. Most of it donated. Even in the heat of Coachella, there is something special about challah on a Friday night. Some folks davenned, most didn't. People respected the space and didn't smoke inside the tent. Some took off their shoes.

Shabbat was an oasis of calm amid the chaos.

And bagels. In stereotypical fashion, bagels and cream cheese were very popular throughout the whole weekend.

A shout out to Shawn the Jewish pedicabber from D.C., who shlepped our stuff from parking lots to our tent. This arduous two-mile journey helped considerably when Rachel brought the in the last minute supplies from L.A. He transported the kugel effortlessly.