In 2006, the students at Monroe High School in Michigan experienced something they'll never forget.

Monroe was a place where both students and teachers said racial tensions ran high, in everything from racially divided cliques to physical fights between students of different races. So, in an attempt to address the prejudice and bullying taking place in its halls, Monroe High School had students take part in a transformative exercise aimed at breaking down the walls among them.

It's called Challenge Day, and back then, Lisa Ling got a firsthand look at the power within this seemingly simple program on "The Oprah Winfrey Show."

"Teenagers from vastly different backgrounds are forced to interact," Ling reported. "Slowly, a room full of high school students start stepping out of their comfort zones."

During one memorable Challenge Day element, students were asked to cross from one side of the room to the other if they'd ever been teased or hurt for wearing glasses, wearing braces, wearing a hearing aid, the way they walked, the way they talked, the clothes they wore, their height, their weight, their complexion, or the shape, size or appearance of their bodies. As each of these things was called out, more and more students crossed the imaginary line until no one was left standing on the original side of the room.

"Is this the school of your dreams?" asked Challenge Day co-founder Yvonne St. John Dutra.

It wasn't. As barriers broke down, a senior football player named Chris stood to address his part in the racial prejudice that had become rampant at the school. 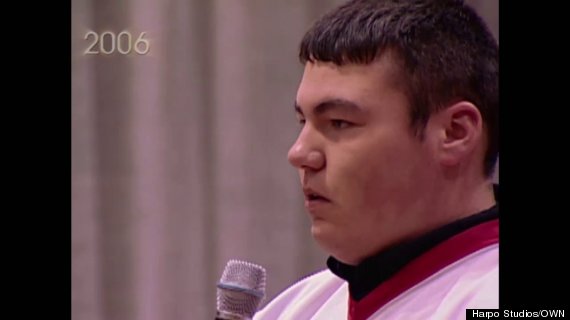 "There's a lot of people in here today that I've said some things [to], that I never should have said. Nobody deserves what I said to them," Chris said, his voice breaking. "Dorian over here, he's my teammate. He's my friend."

As other students displayed the sign language sign for "I love you" to encourage Chris to continue, his African-American teammate Dorian joined him in the front of the room.

"I've said some things to him that... Man, I'm sorry," Chris said, tearfully embracing his friend.

Seeing Dorian walk across the line is what made Chris want to change. "He had a tear in his eye," Chris told Oprah at the time. "I knew that part of that was my fault."

"That's when I found out that... he knew that he was being racist towards me," Dorian added. "He thought it was just jokes and things like that. But... it really does hurt you." 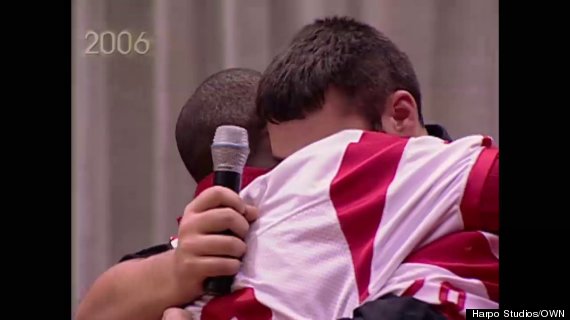 "Oprah: Where Are They Now?" caught up with Chris and Dorian recently, nearly a decade since their high school breakthrough. Both expressed that the lessons of Challenge Day have remained with them over the years.

"That moment was much bigger than just me and Chris because that same situation happens, I'm sure, all over the United States, all over the world," Dorian says. "It really changed my life because that was when I decided I should speak up on the issue of bullying and race, and just people discriminating in general."

"Oprah: Where Are They Now?" airs Sundays at 9 p.m. ET on OWN, with all-new episodes returning in March. Find OWN on your TV.