Brexit has been viewed by some commentators as a protest vote against the globalisation paradigm. As the Internet is the technological basis for global integration, and the medium through which billions of people experience globalisation, Brexit should make us think more seriously about the future of the Internet. The shifting paradigms of globalisation and integration are likely to directly affect the Internet.

Thus, the Internet we have today should not be taken for granted.

This is also an echoing message in the latest research and studies dealing with the future of the Internet. Earlier this year, the World Bank's report on Digital Dividends issued the first major warning about clouds in the Internet's blue sky. The World Bank claimed that the dividends (benefits) of Internet growth are neither as big nor as evenly distributed as is often claimed. In particular, productivity has not risen in the Internet era, more jobs have been lost than have been created, and politics has not become more inclusive. According to the report, the gap between the promises of the digital era and its real impact is widening (just as the gap between expectations and reality was behind quite a few of the Brexit votes).

The World Economic Forum report on Internet Fragmentation outlined the risks of technological, governmental, and commercial fragmentation of the Internet. The report argued that we may end up with many Internets divided by national, corporate, and other border lines. (Read our analysis of both reports in Issue 7 of the Geneva Digital Watch newsletter.)

Last week, the Global Commission for Internet Governance (GCIG) joined the chorus of alerts on the future of the Internet. In presenting the GCIG's new report, One Internet, Commission President Carl Bildt said: 'The Internet is at a crossroad. Threats to privacy and other risks that may bring the Internet down are real.' On Brexit, Bildt issued a similar warning when he said that 'the virus of political divorce has certainly proved contagious - and a more fragmented Europe is undoubtedly a less safe one.'

While the three Internet reports are solid on diagnosis, they are weaker when it comes to presenting possible solutions. The reports dwell on the problem of lack of trust and the need to build trust (this element is mentioned more than 70 times in the GCIG's One Internet report). The message is that trust matters and that it takes time to develop. Britain now faces a similar problem not only with its European partners, but also with the rating agencies: to rebuild a broken relationship and build trust to move forward after the Brexit vote.

It's difficult to disagree. But just what does trust mean in the context of the Internet? This blog post on online trust explains some of the elements of trust in the online world (including transparency in the use of data, clear terms of use, and balance in the roles and interests of different parties).

And how can trust be developed? Trust-building in the online world, just like in the offline world, can be accelerated in three ways: by ensuring that the democratic choices made by citizens have a real impact, by making institutions and systems more predictable and reliable, and by aiming towards more fairness in society.

When democratic choices lead to real impact, this increases the legitimacy of institutions. I have experienced this over the last 25 years living in Malta and Switzerland, two countries where citizens' political choices are genuinely respected, and not just taken as a 'formality'. Such democratic practices increase citizens' trust in government, and ultimately make society more inclusive, prosperous, and stable. This applies in all fields, including the Internet.

Predictability also matters as much on the Internet as in real life. In order to lay plans for the future, people need to have trust in the system. Most studies on prosperous societies point to the existence of predictable and reliable institutions. Trust in institutions and in the rule of law is considered one of the main reasons for the success of Silicon Valley; this trust frees time for innovation and creativity.

Fairness increases legitimacy and societal buy-in. As the World Bank report points out, the distribution of the digital dividends of Internet growth has not been particularly fair, and those who benefit least feel this. While Uber, Airbnb, and similar companies introduce many innovations through the collaborative economy, they also have to contribute to local communities worldwide. For example, somebody has to pay for the roads on which Uber cars drive.

When Internet companies do not pay taxes, it matters even more than in the case of other industries (e.g. commodities, oil industry). The business model of the Internet is based on social capital financed by taxpayers. The collaborative economy ‒ built around online platforms ‒ would not exist without a collaborative society based on respect for human rights, support for education, and social inclusion. 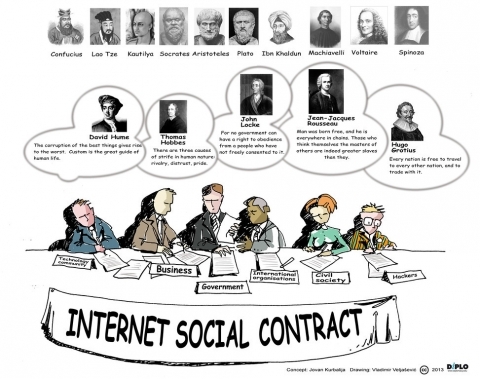 The journey of building trust in digital politics is likely to be
long and slow
. On this journey, the key is to avoid hype and empty rhetoric, and focus on real concerns. The good news is that, while all Internet governance actors may be seen as having legitimate interests, they also have limited power to dominate the policy sphere. A balance of sorts already exists.
Advertisement

Governments have a legitimate interest to protect national security and citizens' safety, but their power to control online developments and data flows ‒ especially with encrypted data ‒ is limited.

For Internet companies, such as Facebook and Google, a global Internet is at the core of their business model. In addition, users' trust in online business depends on the protection of data. Technically speaking, companies have the encryption power to protect data, as the Apple-FBI controversy has shown. However, this technical power can be reduced if they are legally obliged to provide access to user's data in specific cases.

For Internet users worldwide, the Internet is a great enabler, whether we speak of families keeping in touch via Skype or WhatsApp, social activists working together to address injustices, or academics networking for the purposes of research. The power of Internet users is largely paradoxical. On the one hand, users have the ultimate power in the digital realm, which they exercise by using or not using specific Internet platforms. On the other hand, Internet users have limited operational power in the digital realm compared, in particular, to governments and the business sector, both of which have the means and the tools to affect digital policies directly.

The mix of legitimate interests and limited power on the part of the main actors provides some optimism for future Internet developments, even in the days where post-Brexit pessimism dominates most public discussions. However, even with a good basis, compromise does not happen on its own. It requires a lot of patient work and awareness that public decisions depend both on logos (rationality) and pathos (emotions).