Dennis Blumenfeld coordinates an $8 million Multilateral Investment Fund technical assistance project to advise governments throughout Latin America and the Caribbean on public-private partnerships. He has a master's degree in political economy from Georgetown University's School of Foreign Service.

All around the world, women are taking leadership roles in both government services and private business ventures more and more often. According to a global survey conducted by the human resources consulting firm DDI, companies that perform best financially have the greatest numbers of women in leadership roles. However, female leaders still often experience challenges related to the traditional gender roles that have been imposed on them. It is important for all sectors to pay attention to how such challenges affect women's ability to serve as leaders, and therefore affect the overall effectiveness of the operation.

Given that they generally involve collaboration between two traditionally male-dominated fields, construction and government, public-private partnerships (PPPs) have presented more than their share of challenges to women seeking to work on such projects. In June, at a luncheon during the PPPAmericas conference in Santiago, Chile, the Multilateral Investment Fund recognized women such as Eva Bufi, Executive Director of the Specialist Centre on PPPs in Smart and Sustainable Cities; Cristina Simon, Director for Infrastructure Finance from Deloitte Colombia; and Luz Elena Paternina, Secretary of Planning of Cartagena, Colombia, all of whom are leaders in the design and implementation of public-private partnerships (PPPs) in Latin America. Honoring these leaders was valuable because we had the opportunity to hear about the challenges they have faced, and how they have overcome them. In conversations we held with them and other women participants over the course of the conference, they told us about three common factors that had made it more difficult to develop their careers as leaders in their fields: 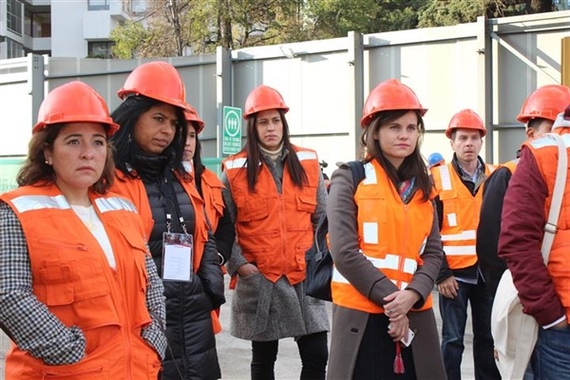 Employment discrimination: Several mentioned facing employment discrimination even before being hired. Employers asked inappropriate questions during the job interview process related to their family lives and child rearing plans. This showed that those employers assume that female employees will be absent and less productive than their male counterparts because they are the ones who "have to" stay at home to take care of their families.

Traditional gender roles: The women also mentioned that partners who support their dedication to their career are key to their success. Some said that it is important to be with a partner who is not affected by traditional gender roles, and is willing to consider working part-time or caring for children full time. One shared that her partner has been discriminated against, through suggestions that he was not "manly" enough since he is not the main provider for his family. After she told the story, she laughed, saying that her partner is confident and he ignores these types of comments.

Lack of support: Some also emphasized the lack of support for women in the sector. They said that there are not enough groups or organizations to help women in the sector to connect with each other. Another suggested that it would be helpful to have a support group for sharing struggles and celebrating successes. Finally, they all agreed that there should be more women speaking at events related to public-private partnerships. In organizing the PPPAmericas conference, we made a concerted effort to invite women experts in the field. Despite this, almost 70% of the attendees of the PPPAmericas event were men. This shows that many organizations working on public-private partnerships remain male dominated.

The Multilateral Investment Fund financed research on the impact of PPPs on Gender Inclusion through the Public Private Partnership in Infrastructure Resource Center, a repository of materials to help governments plan, design and structure PPPs. Yet, women remain underrepresented in higher levels of PPP leadership. Women like our panelists, who have achieved senior leadership roles, can play an important role in addressing this, as they bring experience and mentorship to help other women in advancing their careers.

Andrea Arzaba Diaz completed her graduate degree at Georgetown's School of Foreign Service in 2016, where she majored in Latin American studies. Andrea has always been committed to the empowerment of women in the region. Currently, she is a consultant for the Multilateral Investment Fund.