During a time when the human effect on the environment has never been more destructive, what are you doing to reduce your carbon footprint? Maybe you're making a conscious effort to walk more and drive less; perhaps you're a meticulous recycler; or maybe you're vigilant about not using any unnecessary energy.

But what about not having kids? After all, while we like to single out fossil fuels and deforestation as the main culprits for destroying the planet, the simple truth is that we are behind all of that. The problem is us - that there are too many of us, to be precise.

The human population is out of control. There are nearly seven billion of us today; in 2050, there will be almost ten billion. While we can pledge that we will do all we can to reduce global warming, there is no avoiding the fact that we are living in a planet with rapidly diminishing resources. 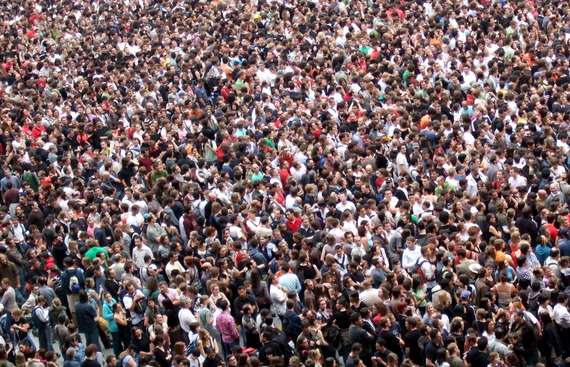 Humans; there's a lot of us. Image by James Cridland

We use more gas than any other nation; we invest more in fossil fuels; we demand bigger houses with more space. Our impact on the environment is vastly, terrifyingly, greater than that of any other country. And this is why more and more Americans are choosing not to children for environmental reasons.

Of course there is much we can do to reduce our carbon footprint, but by far and away the most significant contribution anyone can make towards a greener, cleaner world is not to reproduce. A study in 2009 by Oregon State University found that the effect of having one less child in the USA is nearly 20 times greater than religiously recycling, using efficient appliances and driving a "green" car your whole life. On average, every American child adds 9,441 tonnes to each parent's footprint.

Despite these startling figures, the suggestion of having fewer children, let alone none at all, is rarely suggested in comparison to other eco-friendly guidelines. And it's not hard to see why. As Britain's Labour Party leader Ed Miliband stated, "There's no question that population growth is part of the reason why we have growth in carbon emissions... but I'm not sure that there's an easy or necessarily desirable solution once you've stated that fact."

No one wants to tell people they cannot or should not reproduce - but more and more people are beginning to speak up. Naturalist legend David Attenborough is the patron of the Optimum Population Trust which operates a campaign advocating parents to "Stop At Two". If everyone had fewer children, as opposed to none at all, the positive effects on the environment would still be significant. So perhaps there is a middle ground...

Having children is something everyone should have the right to do should they wish to, so if the argument for preserving the environment is not swaying you from your desire to procreate - as it has not done for most - what are the other important steps you can take to reduce your carbon footprint, and that of your child's?

Making a commitment to renewable energy will have a significant effect on keeping the environment as clean as possible; solar power uses 86% less water than coal and presents approximately 95% lower toxicity to humans, producing clean, pollution-free energy.

Living in the city or near to it also can reduce your carbon footprint. As anyone who has kids knows, a disproportionately large part of parenting is chauffeuring your child about: there's the school run, soccer practice, ballet classes, swimming lessons, birthday parties. While living in the country may be desirable for many families, there's no denying it adds a hefty addition onto the amount of gas you use.

If you do have children, perhaps one of the most valuable lessons you can impart from a young age is the importance of living as greenly as possible - because after all, it's our children, and our children's children, who will feel the effects of our carbon footprints the most.