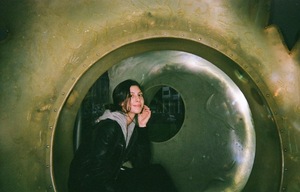 Let me paint the opening of my graphic novel: Five igloos stand tall against the whipping wind as girls huddle in their sleeping bags and gnaw on frozen Snickers bars. The High Mountain Institute is infamous for challenging students to live and learn within nature through expeditions in the Colorado backcountry. From afar, the idea of a semester school--a new environment, curriculum and community--seemed romantic. Yet, as I sat in a tent filled with Junior Olympic skiers and farming gurus, I could not help but feel like an anomaly. To me, Central Park was the Great Outdoors. So, as I watched girls scurry up boulders, I feared I was not cut out for this.

Flashback to my departure: "Flight #3675 is now boarding." It was a phrase I dreaded for months. The voice on the intercom reverberated through my body. Trying to present my parents with the confident, fearless girl they raised, I gathered the strength to say goodbye. I entered the air bridge and with each step, and every nervous look back, my mother's figure grew more faint. Enduring my first flight alone was manageable; enduring four months alone was unimaginable. "Worst decision of your life," I wryly whispered to myself.

My easy smile and svelte posture suggest security, but deep down, some self-doubt lingers. Though a lack of confidence has never halted my love of reading or my evolution as a writer, in middle school, I struggled to receive praise without second-guessing its validity. Timidity prevented me from joining the swim team, traveling alone to Asia, and auditioning for our play, Annie.

By high school, I developed well-grooved patterns at home that soothed my self doubt; I would wake up, ride the M79 bus, meet friends for breakfast, and take a test for which I was more than prepared. I had conquered the routine that was my high school career. However, I soon realized that my comfortable rhythm was not the reason to stay; it was the reason to leave. My underlying fear was not the program itself--it was abandoning the predictability I knew.

I entered the igloo--my home for the program's first fourteen days--hauling seventy pounds of food on my back. I proceeded to unpack my puffy coats, fleece layers and wool socks. Allowing the harsh conditions to cripple us was not an option. We danced to keep our feet from freezing, slept with hot water bottles, and consumed 6,000 calories daily to fortify our nervous systems against the cold.

In a mere four months, I built an igloo block by block; waded through freezing rivers with ease; and skied for the first time, eating snow the first day, but shredding it on the last. I climbed Mount Elbert, a 14,000 foot peak, with skins on the bottom of my skis. Weighed down by a sled for ten days and ten nights, I learned the power of patience and mental resilience. If I can conquer nature as a city-girl, I can conquer anything.

The next time I sat in an airport was for my return flight. The fear which sullied my first departure was replaced by a sheer sense of accomplishment. Central Park now feels miniscule. If only I could tell the Anya of January 21st that courage does not mean being fearless--that the most transformative events happen in the wake of great fear. With the memory of Mount Elbert's peak ingrained in my heart, I will not let self-doubt impede me; I will use it to fuel my ambition. So next time there's a team try-out or an audition, I'll be first in line. Next time I say I cannot write a novel, I'll write two. And yes, I'm a bit frightened to enter this new chapter of my life, but I know a great story is waiting to be written.

Anya Carter, a 2016 graduate of The Dalton School, will be a freshman at Washington University in St Louis in the fall.