As the 2016 New Year rolled in, I found myself in the home of the lead singer of a pop-alternative band from NYC, along with around twenty other musicians from various backgrounds and creeds, many of whom had not known each other before that night. After sharing a meal together, we dove into some challenging dialogue, trading stories of authentic connection and the struggle. Just one hour before, we were strangers, but amidst the storytelling and spontaneous jam sessions, the sounds of jazz-piano and 90s R&B a-cappella became a catalyst for new camaraderie. I knew I had caught a glimpse of something really special, and it was the sort of magic that can happen when curiosity, creativity, and compassion come together. On the surface, it looked like a pretty dope party, but really, something bigger was going on. These were the artists of the Noon Project, a musical collaboration of global artists working together to raise support for victims of ethnic and religious oppression in the Middle East. But our story starts a year ago, on a beach in Libya, whose coastline tragically became stained with innocent blood.

On February 15th 2015, ISIS broadcasted a video depicting the beheading of 21 Coptic men on the Libyan shores of the Mediterranean Sea because they were Christian and would not convert to radical Islam. Being a Coptic man, I saw 21 of "my own" lined-up along the shore, wearing orange jumpsuits, kneeling, heads down, silent but strong. I saw not only 21 men, but also a piece of our very nature as humans on the execution block. Seeing my own family in the faces of the 21, people who also left Egypt for their livelihood. After the initial emotions subsided and the dust settled, a few of us, armed not with weapons, but with our voices and our minds, came together with an idea to use art to draw attention to the plight of oppressed peoples, and find a way to support them in a practical way. This was the moment that sparked the birth of The Noon Project later that year. Many told me this was a bad idea--not because they disagreed with the mission, but rather due to the challenges such a project could involve. Despite the pushback, we believe our approach is the only way to save humanity from self-destruction.

The project didn't start out with such a challenging mission. In fact, it was quite safe. The initial approach was to find Middle-Eastern artists to make music that will help Middle-Eastern victims of oppression. Makes sense, right? However it wasn't long before I began to feel that this approach was short-sighted. While it is perfectly natural to have Assyrians, Chaldeans, Copts, Shia, Kurds and Yazidi helping out their own kind, there is something problematic about this strategy. This problem wasn't apparent to me until I began talking about The Noon Project with some close and trusted friends who didn't share the same cultural ties to the suffering as I do.

One friend in particular challenged me with the idea of creating a project where the team and the end product represent the kind of world we want to live in, one in which all voices are invited to the table; not just the ones representative of those we wanted to help. My initial reaction: Yes! Wait, no! My friend was calling out to a part of me that he himself knows well, because we share these ideals. But despite the growing fire in my heart, I resisted. I knew he was challenging me to do things that would make people uncomfortable, and while my 20-something year old self would relish the enjoyment of being provocative, my decade older self is no longer satisfied with actions for the sake of pushing other people's' buttons. I could hear the questions arise: Why would a Muslim want to sing on a record where the proceeds are helping victims of radical Islam? Is it possible for songs with Christian, Muslim, and Non-religious themes to share the same musical space? Why would a non-religious person get involved with helping the victims of religious persecution? In my own heart these questions were irrelevant. A record that brought everyone and every voice together made absolute sense to me, but, I just didn't think it would be acceptable, or even palpable to others. So I politely set aside the challenge that I had almost taken up.

Soon, I was having conflicting thoughts would not rest. I began to see the world through a different lens, saturated and bleak; there seemed to be division in every aspect of life. Our country was more divided than I ever remember it being. Wars and riots erupted and continued to simmer, hatred persisted. I looked at the Noon Project and suddenly realized: if we don't make this album inclusive, we might be creating yet another space where people will care about and fight for their own, but lack the space to exercise their empathetic muscles towards those different than them--a "silo of compassion." And I didn't have to go far, or wait too long to witness the effects of this silo.

Upon the news of the beheading of the 21 in Libya, my own social networks were flooded with a resounding cry for justice. The Coptic community was shouting to the world that this massacre was part of a greater story where Christian minorities in the Middle East live under constant threat of discrimination or worse fates. We shouted so that everyone would listen to us, that they would not only know what was happening, but that they would also care. United we stood, with our candle memes burning strong on our retina displays. But as we turn our eyes to the United States, where the country is facing a crisis, where young black men are the targets of racial injustice, the Coptic community as a whole becomes incredibly silent on the issue. Being victims of injustice ourselves, we should be the first to recognize when injustice exists, or at the very least have the empathy to relate, and possibly share our voices on the matter.

This behavior is not unique to the Coptic community by any means. We, as humans, do not naturally relate to the struggles of others whom we consider different than ourselves. It's how we all operate. We focus on the struggles of those similar to us, and minimize, or sometimes ignore the struggles of another, and much of that has to do with our own limitations of airtime, resources, and perceived emotional capacity. You see, many of us share a collective vision for the world, one that involves people of all colors holding hands and singing songs of peace, but we cringe when it comes to what it might take to get there. But it feels like a form of hypocrisy for those who have experienced injustice to knowingly or unknowingly withhold compassion from others who are experiencing it themselves. This behavior contends that my struggle, and therefore my existence, is more important than yours, rather than acknowledging our shared human identity.

It is not my intention to minimize the difficulty of such a task. There are reasons for the separation between people. There has always been enough evil, violence, and greed in the world, that separation in some cases had become necessary for the survival of some. But is this a sustainable model? These were the concerns that I wrestled with for a long time, and which eventually led to a change we had to make in the Noon Project.

While we would maintain our goal of helping persecuted minorities in the Middle East, we decided to open up our doors and invite artists and collaborators from all backgrounds, faiths, and ethnicities to participate in the making of this record. While the Noon Project first and foremost exists as an attempt to grant justice to those who have been stripped of their own, we took on a very important secondary goal: to be a model of coexistence in a divided world. 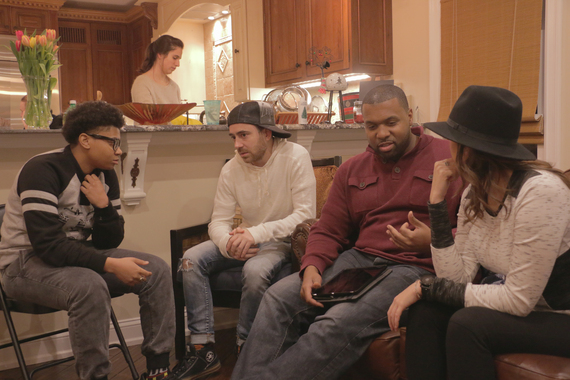 The idea was that if we could bring people together from different backgrounds, and invite them to share their own experiences through music and art, then there would be dialogue, inquiry, and new understanding. I am happy to report that this vision is becoming a reality! On January 2nd, 2016, we had our 2nd Noon Artists gathering for NYC, where local bands and solo artists who have made submissions for the record came together to share a night of community and dialogue. At this gathering we began having these very conversations, and many were exposed to stories, and perspective they had not encountered before. Even if this experiment in empathy reaches only as far as within the community of artists working on this project, it could be a small but powerful shift and one that we hope can radiate outwards. We aren't setting out to change the world, but we are determined to be an example for what is possible when a group of people create something together while recognizing the common thread of humanity connecting them.


What is our response to #‎BlackLivesMatter, the Syrian refugee crisis, the multiple attacks on Paris over the last year, the growing anti-Muslim sentiment in America, the attack against Christians, Muslims, Yazidi, and Kurds in Iraq, the growing suicide and homeless rate of LGBT American teens, and the barriers of education to young women in many parts of Africa? If empathy is a resource, how rich are we? Will we continue to only acknowledge the struggles of our "own kind," or can we begin to open hearts to our neighbor and begin to see ourselves in them? Maybe then we can begin to shed this illusion of an "us vs. them world" and can start to experience something far better. And this is why our project is built on this foundation.

Unless we model coexistence in a radical way, there is no war, no revolution, nor any amount of political correctness that can actually move the needle of humanity towards peace. 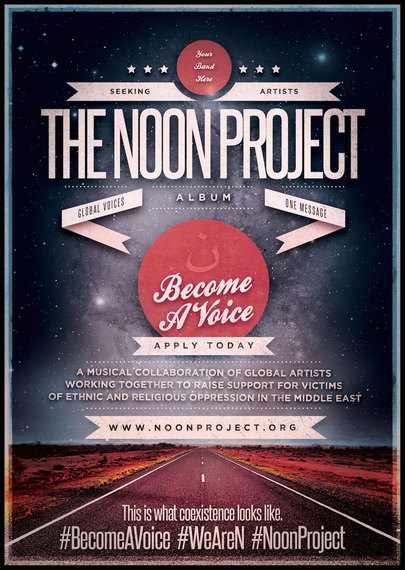 Are you a musician and share in our vision? Apply for a spot on our record!