The "Chamomile Tea Party" is the brainchild of Jeff Gates, a designer who is pretty outspoken about his distaste for the partisan hostility that's engulfed Washington. Now, I'm a little partial to a good, old-fashioned partisan street fight, but I'm an even bigger fan of the classic, colorful designs of World War II-era propaganda posters. Gates has produced a series of posters, modeled on those old school patriotic urgings, that hit me in that sweet spot, so I figured I'd share them with the rest of you.

In an email, Gates explains how he came to be inspired to create these designs:

Congress seems to have become paralyzed by partisan politics. There's been so much party rhetoric it's become difficult and time consuming to get any important legislation passed. More often our representatives seem to vote their party's line rather than their own or their constituents. And that impasse concerns me.

As I was walking home from work the day before the 4th of July weekend, I listened to a news story on Supreme Court nominee Elena Kagan. When I heard the reporter say that most, if not all Republicans would vote against her nomination, that was the proverbial straw that broke the camel's back. Kagan didn't seem to be a fringe candidate to me. And I reacted in a way that any designer might. I would use my visual powers for "the good of the people" (or at least I was trying to find a way to communicate my disdain for the political status quo)! ;-) Like many ideas that brew at any given time in my brain, my next step simply presented itself.

I had always been interested in the power and intersection of propaganda and design. And World War II was a fertile era for both. On my walk home I decided I'd see if I could recontextualize these posters' visual power with messages that speak to our present political roadblock. I formed the Chamomile Tea Party in an effort to bring calm to American political discourse. And I published the posters under the Party's moniker. Each poster is based on a World War II-era poster. On Flickr I actually show the original poster along with my updated version.

Comments about the first set of five posters helped me clarify my message for the second set of six I came out with two weeks later. Many thought I was advocating a middle-of-the-road stance. Others thought my allegiance to the Left was showing. While others thought the messages were spot on. Both the Democrats and the Republicans are guilty of rhetorical pandering and posturing. But they do it in different ways. The consequence is that many Americans continue to suffer while, as one reporter said yesterday, Congress has entered its pre-election "funny time," when even less will be accomplished. It's a "Nero played while Rome burned" sort of feeling. And I've tried to convey the anger and resignation that many Americans feel right now in these posters.

For further information on the posters, including the old-school designs that inspired these updates, visit the Chamomile Tea Party's Flickr page. 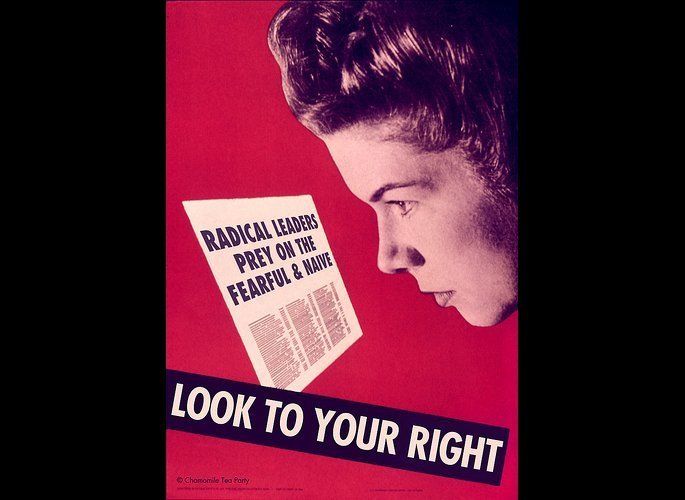