Sheila Kuehl walked her first picket line as a member of the Screen Actors' Guild, when she was 11 years old, an experience that forever forged her close ties to America's working families and their unions.

Kuehl was a highly-respected child actress who worked in radio and on several well-known TV series, including "Trouble With Father" and, most memorably, as Zelda Gilroy, Dobie's wannabe girlfriend in "The Many Loves of Dobie Gillis." She joined AFRA (which was trying to add a "T" for "Television" at the time) at age 9 and the Screen Actors Guild the following year.

Even as a kid, she used her celebrity to speak out on workers' issues. She recalls walking the picket line at a studio in Culver City with other SAG members in a strike called over filmed TV commercials, when Walter Pidgeon was the SAG president.

"It was thrilling to be carrying signs with other actors and it was an early lesson in what sticking together can accomplish," says Sheila.

That experience set the stage for Kuehl's political activism, which has included her pioneering work as a lawyer and advocate for working families and women, 14 years as one of the nation's most effective state legislators, and now as a candidate for the Board of Supervisors of Los Angeles County, the nation's largest county, with a population of about 10 million (larger than 42 states), a budget of $26 billion, and over 100,000 employees, most of them involved with health care, human services, and law enforcement. 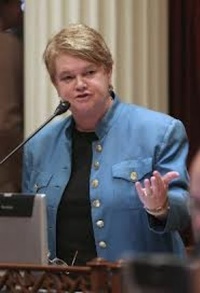 Sheila Kuehl on the campaign trail

Unlike many actors who become politicians, Kuehl spent many years as a grassroots activist and advocate before running for office. In fact, few voters even know about her experience as a child actor. Her political career has been grounded in the large network of supporters she attracted as a result of her activism, not her celebrity name-recognition or family money.

After she left acting, Kuehl became an Associate Dean of Students at UCLA, her alma mater, then went on to the Harvard Law School, where she was the second woman in the school's history to win the Moot Court competition. Returning from Harvard to Los Angeles, Kuehl taught at Loyola, UCLA and USC law schools and co-founded the California Women's Law Center where, as managing attorney, she drafted and fought to get into California law more than 40 pieces of legislation relating to children, families, women, and domestic violence.

She made headlines when she was elected to the California state Assembly in 1994 as the first openly gay or lesbian member of the state legislature. During her six years in the Assembly (where she became the first woman to serve as Speaker Pro Tempore) and eight years in the Senate, she made her name as a tireless and effective advocate for working families. She authored 171 bills, signed into law by three different Governors, including laws to overhaul California's child support services system, protect domestic violence victims and their children, prohibit discrimination on the basis of gender and disability in the workplace and sexual orientation in education, and safeguard the environment and drinking water. She was repeatedly voted the "smartest" member of the California Legislature. She received the 1993 UCLA Award for Community Service and the 2000 UCLA Award for Public Service, among many other honors.

Michael Lighty, public policy director for the California Nurses Association, had similar observations about Kuehl's skillful ability to make things happen against the odds. Kuehl authored what Lighty called "one of the most trailblazing patients' rights and employees' rights bills in the country" -- a law establishing nurse-to-patient ratios in every hospital, enacted in 1999.

"Sheila figured out how to get the bill through the legislature and get it on Gov. [Gray] Davis' desk. She knew the issue inside and out. The hospitals mounted an expensive campaign to stop it, but Sheila never backed down. She was very pragmatic. She could play hardball if necessary, but it really helped that her colleagues in the legislature liked and respected her. "

Beginning in 2003, Kuehl led the fight in the legislature for the California Universal Healthcare Act (SB 840), and, in 2006, and again in 2008, brought the bill to the Governor's desk.

"It was the first time in American history that a single-payer healthcare bill got that far," recalled Angie Wei, legislative director for the California Labor Federation. "Gov. [Arnold] Schwarzenegger vetoed the bill, but the battle to get it passed helped make the idea of universal health care more popular. It helped change the political climate for health care reform in the whole country."

"I come from a working class family," Kuehl said. "I have always honored picket lines, brought coffee to strikers, and supported union issues. There is just a common-sense connection between supporting working families and building a better economy and a better society."

During her 14 years in the legislature, Kuehl compiled a 100% voting record on all major labor bills. She sponsored legislation to expand the Fair Employment and Housing Act regarding pregnant workers and workers with disabilities, as well as bills to protect workers' rights to privacy in their employment records, oppose trade agreements that undermine labor protections, and create funding to keep film production in California. She authored AB 1268, which strengthened the protection of unions and strikers by making the Moscone Act consistent with the federal Norris-LaGuardia Act, requiring that, before a union could be held liable for the unlawful acts of its members in a labor dispute, there must be "clear and convincing" proof of actual participation or authorization by the union.

Beyond the legislature, she's been a constant presence at union meeting halls, rallies, and picket lines.

"She is a true champion of labor," said Rick Icaza, president of Local 770 of the United Food and Commercial Workers, which represents 30,000 employees in grocery stores, pharmacies, and meatpacking plants. "She has shown her commitment to working people on our picket lines as well as in the state legislature, where she shepherded major protections for working women and men. She's been on the front lines because she cares and she understands."

When speaking to hundreds of people at a rally, the charismatic Kuehl tells stories to show how everyday people - seniors, children, and workers -- need government . When talking with other politicians on complex issues, her years of legislative and legal training make her a persuasive advocate.

"Cooks, dishwashers and servers in California's food service and tourism industries have long had a strong ally in Sheila Kuehl," said Tom Walsh, president of Local 11 of UNITE HERE, which represents 20,000 members. "We are proud to say that she has also been an early and outspoken advocate for the need to pass a higher minimum wage for housekeeping room cleaners and other hotel workers in Los Angeles."

Kuehl left the legislature in 2008 under California's term limits statute, but has continued to be a voice for progressive change. She founded Santa Monica College's Public Policy Institute, devoted to undergraduate and community education, and, in 2012 she was appointed Regents' Professor of Public Policy at UCLA. She has worked with a variety of advocacy groups on legal and policy questions to improve working conditions, the environment, and equal rights.

This year, LA County Supervisor Zev Yaroslavsky will be termed out after 20 years serving the Third District, which stretches from the San Fernando Valley to Santa Monica, from Westlake Village to Hollywood. Kuehl's many friends in the region's environmental, labor, and civil rights community encouraged her to run for the seat, because Los Angeles County government plays such an important role in the daily lives of every resident. There are only five members of the Board of Supervisors. Each one represents about two million people, but they all oversee every one of the agencies that serve all 10 million people in the county. LA County has one of the highest levels of poverty, income inequality, and working poor families in the nation.

"Whether I've been inside government and outside government, I've always been struck by the incredible impact that governmental policy has on the lives of real people -- how government decisions could make people safe or not, treat them fairly or not, give them a helping hand or not, open up educational, training or job opportunities, or not."

In the state legislature, where she chaired the Senate Committees on Health and Human Services, and Natural Resources and Water, Kuehl represented much of LA's west side and the San Fernando Valley. Now she wants to bring the knowledge and experience gained in those years, and earlier, as an advocate, to County government. Her major opponent in the June 3 primary is Bobby Shriver, the former mayor of Santa Monica, son of Eunice Kennedy Shriver and Sargent Shriver, brother of one-time California first lady Maria Shriver, and nephew of President John F. Kennedy.

"As an Angelino from the age of two, this district -- from the ocean to Los Feliz, from Westlake Village to San Fernando and Griffith Park -- is a part of my history. I've worked, listened, met, and served the people of this district from one end to the other, including work on many of the local issues for which the county is deeply responsible: social welfare, child welfare, transportation, environmental and water quality, protection of the Santa Monica mountains, juvenile justice, education, public safety, and, of course, the budget."

Kuehl is well-known for her legislative skills, her compassion, and her quick sense of humor. What many don't know is that she's also a policy wonk who already understands the details of LA County's complex $26 billion budget.

"I want to make certain that the new healthcare programs roll out smoothly, to improve the care we give foster youth and the children who need us, to continue to connect all parts of the county by affordable public transit, to expand our efforts to guarantee that we all have clean air and water, to be a champion for the arts, to work with our fire and public safety officers to make sure every person feels safe and fairly treated, and to address the re-entry and rehabilitation for the many low-level offenders who are now the county's responsibility."

________
Peter Dreier is professor of politics and chair of the Urban & Environmental Policy Department at Occidental College in Los Angeles. His most recent book is The 100 Greatest Americans of the 20th Century: A Social Justice Hall of Fame (Nation Books, 2012).