Democratic socialism is the main reason we're not living in a fascist or feudalist country right now. 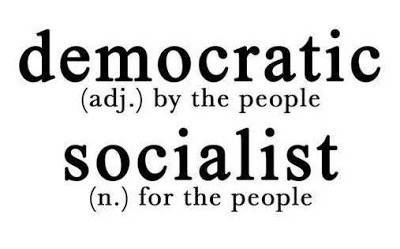 Essentially all developed countries on earth today, including the US, have a mix of two basic economic systems: socialism and capitalism. Let's look at these two fundamental approaches to distribution of wealth and power.

Capitalist policies favor people and corporations who have the most wealth or capital to invest to create more wealth. If left unattended, over a few decades, a purely capitalist system will crystallize a small .01% of a population who are extremely wealthy and a massive 99.9% underclass of workers and drifters without rights or privileges.

Capitalist policies have run amok for decades in the United States, and there are hundreds of signs today that our socialism-capitalism balance is out of whack, from wages to water. Here are just four examples:

As can be seen from these four examples, capitalism and democratic socialism are often at odds, but they can operate in a healthy tension. They can and must be tuned, like a musical instrument or a sophisticated machine, to interact together in harmonious symbiosis.

If our economic system were a car, capitalism would be the engine -- a tremendous motor that utilizes people's profit motive and inherent ingenuity to unleash economic growth. Democratic socialism would be the steering wheel, utilizing people's wisdom and altruism to create a livable world for all. Capitalism alone considers only the interests of capital -- not people -- and in steadily concentrating all wealth in the hands of a few will propel society over the cliff of fascism or feudalism. Democratic socialism enables the people -- the 99.9% -- to enact government policies and regulations that will steer that powerful capitalist engine in the direction of a beautiful, just, inclusive, and satisfying society.

Capitalists and their corporations have wrested most of the power over the past few decades and we have moved too far away from democratic socialist policies. Today we need to bring our economic system back into balance.

I believe in balance, in democracy, and in a society run for the greatest good of all people. So, yes, of course I'm a democratic socialist.

You probably are too.