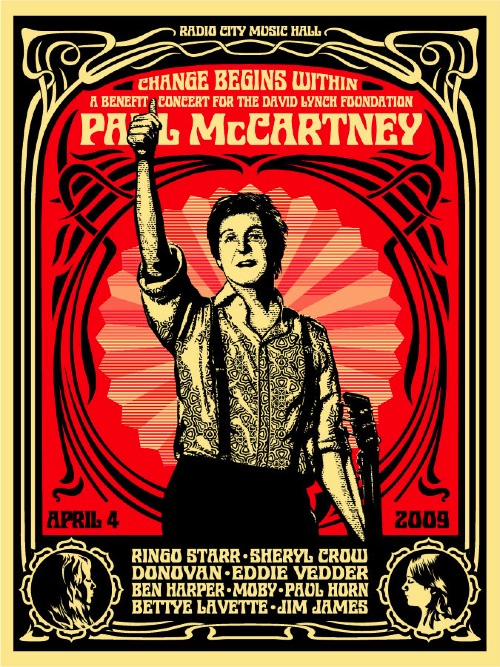 This Is A Special Two Part Series Article.

David Lynch, Paul McCartney, Ringo Starr, and Russell Simmons are coming together for a New York Press Conference on the Web -- Friday April 3rd at 12:00 PM Eastern time. 2009's fab-four are coming together to teach at-risk children how to meditate. Registration to watch this event is required. 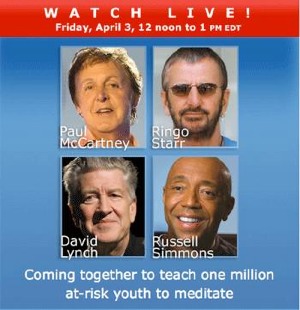 The "Change Begins Within" Benefit Concert.

On Saturday April 4th 2009, The David Lynch Foundation has put together a shin dig -- which is actually going to a monumental event. The "Change Begins Within" benefit concert will be hosted by David Lynch, Laura Dern, and Russell Simmons.

A concert to benefit the David Lynch Foundation (DLF) -- DLF reminisces back to 1968, to a time when The Beatles, Donovan, Paul Horn and The Beach Boys made a pilgrimage to India to study Transcendental Meditation® with Maharishi Mahesh Yogi. In return enlightening us with meditation and music -- changing the way we see the world.

Check out this Beatles In India blog.

Headlining the "Change Begins Within" benefit concert at Radio City Music Hall are the biggest names in the music industry:

DLF was founded in 2005. Pioneering Awareness of the Transcendental Meditation (TM) technique for students and educators, is David Lynch, founder and chairman of the Board of Trustees of the David Lynch Foundation for Consciousness-Based Education and World Peace. DLF is a registered 501(c)3, non-profit organization -- providing student scholarships and school and school district grants.

Proceeds from the "Change Begins Within" benefit concert go to the David Lynch Foundation, and will be used to pay for TM program instruction fees and scholarships for students in approved in-school programs.

The David Lynch Foundation was established to implement a simple and effortless personal development technique for every child to develop their full mental and physical potential -- a state of optimal health and well being. No belief or change in beliefs is required to learn and practice the TM technique -- and to gain all the benefits. Regardless of race, religious beliefs, sex or education -- every child can benefit from the TM technique. Part two will go into in-depth scientific medical details as to how and why the TM technique is so instrumental for children.

A Conversation About Making The World A Better Place To Reside In With David Lynch. 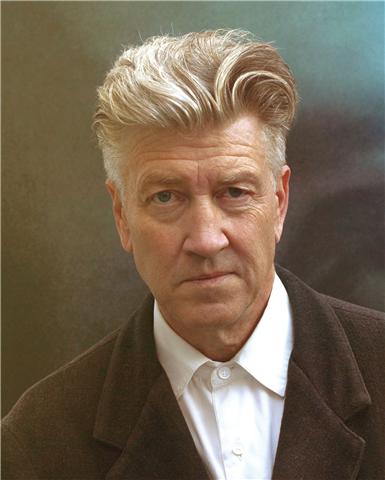 As I'm drinking my organic fairly traded David Lynch Coffee on a rainy Seattle day -- David Lynch and I have a conversation. This is our first discussion in my new series; Conversations About Making The World A Better Place To Reside In.

Tea: Yes, good afternoon to you.

DL: Good afternoon to you.

Tea: Thank you dearly David for agreeing to chat with me.

Tea: This is the first conversation in a new series I've created called; Conversations About Making The World A Better Place To Reside In. My intention for interviewing you is to ignite a personal conversation -- What are you're thoughts about the world today?

DL: Well, It's pretty much the same old world -- there's lots of problems and lots of negativity but I think the world is getting better and not worse. I think there is a field with in every human anywhere in the world. It's called by modern science a unified field -- the ocean of pure consciousness and that field -- when you experience it by learning the TM technique to dive in and experience that field makes life better and better. The more you meditate the better life gets. That's what my foundation is doing to raise money to give Transcendental Meditation technique to any student any where in the world who wants it.

Tea: As you're amazing foundation concludes the finishing touches to the "Change Begins Within" benefit concert -- how are you feeling?

DL: Well, It's a big concert -- it's going to be a very special concert. Fortunately, I'm not responsible for making it an absolutely smooth event. I'll be there and I'm really looking forward to it.

Tea: You have quit a shin dig going on at Radio City Music Hall with a stellar line up Sir McCartney, Ringo Starr, Donovan, and Peter Horn -- I'm interested in hearing how the idea came together and evolved?

DL: We've always talked about a concert -- musicians are such great people. A lot of musicians throughout time have been the ones who campaign causes -- they do benefits -- it always brings so much awareness and support for so many things. This is one of those cases -- where great great musicians have come in support of this foundation and to teach one million kids the Transcendental Meditation technique.

Tea: Would you explain the TM technique and how it effects ideas and the creative process?

DL: This ocean within -- the big treasury is an ocean of infinite creativity. It's a creativity that creates everything that is a thing -- it's mighty powerful creativity. When you dive in there you infuse it, every time you meditate, you grow in that creativity. It's an ocean of all knowingness -- it's an ocean that unfolds into intuition -- number one tool of the artist. The ocean of infinite energy you infuse that and fatigue starts going away -- you can work with so much more energy and in an ocean of infinite happiness and bliss -- you work in more happiness. It's really the most fantastic experience to meditate and then out of meditation, in whatever your doing -- that just gets better and better, more ideas flow. Negativity inhibits creativity it squeezes the hose -- the big conduit of ideas. So when negativity lifts, we expand consciousness -- negativity starts going away. All these things that are restricting us become less -- you work in freedom with all these positive qualities growing. Expanding consciousness means you can catch ideas on a deeper and deeper level -- the deeper you catch the ideas the more expansion they have the more of a thrill they are to catch.

DL: That's the other line but I'm going to ignore it.

DL: Arianna Huffingtion is as cute as a button and as smart as a whip.

Tea: She's amazing -- I had the pleasure of meeting her at NCMR last year and pitched the idea of blogging for her on the Huffington Post Green Section -- she graciously embraced me as one of her bloggers.

Tea: Okay, My last question for you -- I realize you have a very busy schedule this week and I'm so very grateful you took time out of your schedule to speak with me.

DL: I was a painter and then I got into film -- things were going pretty good. One day I looked at myself on a day when I should have been as happy as can be because I had a place to work I was starting my film Eraserhead I had a whole stables area down below and a 55 room mansion in Beverly Hills to work in with equipment I needed. I had the green light to make this film -- I only had a surface happiness. Inside it was hollow and I said: what is going on? I had heard a phrase; true happiness is not outside -- true happiness lays within. I thought meditation would be a way to go in to tap into that. That is what drove me to start. It proved to be more then true -- dive within -- come in and enjoy all glories worldly and divine.

Tea: Beautiful. I wish you a prosperous and fantastic weekend, David. This has been a great pleasure talking to you about making the world a better place to reside in.

DL: Bless you're heart. It's great to talk to you. Thanks a million and we'll talk later.