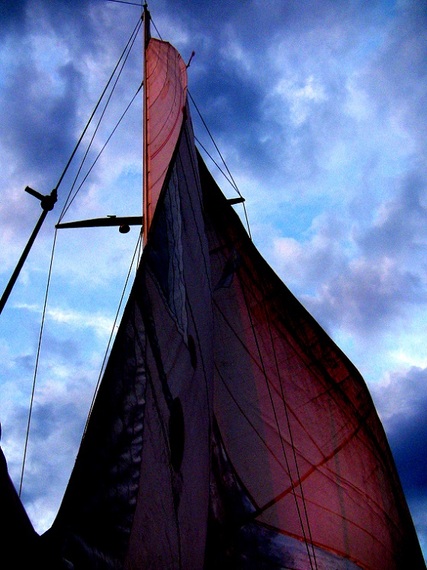 "If we are always arriving and departing, it's also true that we are eternally anchored. One's destination is never a place, but rather a new way of looking at things." -- Henry Miller

A few years ago, I reached a point in my life where I just wanted to be done with everything and take off. So, I did.

Think back for a moment into your past. Feel the intensity and allow that which scares you to rise to the surface.

On June 9, 2011, I tossed off the dock lines and sailed towards the horizon alone on an adventure across the Atlantic Ocean from Wilmington, North Carolina. I didn't arrive at my intended physical destination of Portugal. Instead, I arrived someplace entirely different. Home.

While far out to sea with sight of land days behind my vessel, I sailed into the center of a developing tropical storm. I did not have expensive weather forecasting devices on board. I did not have a lifeboat, nor many of the necessities declared as requirements by experts. I could not afford them. I chose to set out with a smile on my face while the screaming negativity of fearful ones faded into nothing behind me.

For the first 12 hours of an 18-hour event on the third day, I engaged nature in battle. A battle I hated fighting while wishing it desperately to be over. A United States Coast Guard C-130 aircraft came for a visit while I was in the eye of the storm and asked if I needed to be "saved." I could have said, "Heck yeah, I'm jumping off the boat!" I chose instead to keep going.

Even though I saw myself "stuck" in a situation I did not want to be in, I remained there as I listened to the inner voice we all share. At the top of a massive wave, I turned my small thirty foot sailboat completely around and surfed down the face of the same wave. Up until that moment in time, I had never attempted anything like that, every aspect of that day was new... including how I began to flow with fear.

We all face fear-created challenges. We can continue to become angry, blaming everything but ourselves as I used to do before that day, or we can begin to accept and take responsibility for the paths we travel. Every challenge we face builds upon the next one which may be drastically more intense.

"More intense, Greg? Are you nuts? I don't want that!"

Think about it for a moment. All of those painfully intense moments of your past are part of a meaningful cycle of experiences which create a stronger you. Sure, they absolutely suck while you are in the moment sometimes, yet a natural opportunity to manifest positive desires will arise. Liberation follows once the events are complete.

"So, what do I do next time I see intensity approaching? What if it seems impossible?"

Run towards that which scares you. Take the massive leap of Faith which is swiftly approaching you. Leave your zone of comfort. You may find the reward on the other side. Trust yourself.

After I turned around on that wave and began sailing back towards the United States with fifty knot winds at my back and fast moving waves with a power unlike I had ever witnessed, I became angry. I saw myself not on a journey of self-discovery, but of a journey into hell. The Coast Guard had departed as the storm grew more intense. I could not let go of the helm to eat, drink or rest. I actually attempted to get a bottle of water and for the brief moment I let go, the sailboat veered violently to one side almost capsizing.

How to flow with your fear is a simple truth: Stay present with yourself in the flowing moment of time.

At the height of my anger and frustration while feeling scared to death, I saw something approach me from behind. After surfing wave after wave with my little sailboat down the faces of what seemed to be monsters, I saw three whales surfing down the face of the next wave approaching me. Three air-breathing beings just like the rest of us. A smile formed on my face as I sensed them having fun.

Transformation. My attitude towards everything changed in an instant because I was focusing on was happening... not what might happen. I realized I was the author of change. I knew the change appeared once I became completely and utterly focused upon the present moment. A moment which is not static, for time is not a snapshot. Time is always moving forward and our only choice is to move with it. Whatever moment we find ourselves in, we must flow with it.

The reward? A powerful energy source... Knowledge. Knowledge we can store within ourselves and take with us into whatever future we create.

After midnight on the day of the storm, I turned around again and sailed on to the tiny island of Bermuda arriving five days later. I left my damaged sailboat there for the rest of hurricane season until late November. The flight back to North Carolina and the next five months were intense in a different way. A new battle ensued as I fought the word failure in my mind. I flew back to Bermuda after those five months sailing her out of Bermuda bound for the Bahamas. Nine days later after being alone at sea again while dodging another storm, I ended up where the adventure began... Wilmington, North Carolina.

Changes in course are inevitable. Time becomes meaningless as we travel the paths of us. You can change course in any moment you choose. Ask your soul what it wants. In your quiet moment as you breathe, you will receive a quiet answer immediately. Act on your life's purpose and sail to the horizon of you.

More:
healthy livingtransformationbermudachangespiritual-journey
Newsletter Sign Up
The Morning Email
Wake up to the day's most important news.
Successfully Subscribed!
Realness delivered to your inbox