This is the fourth in a series of posts about the prospects for achieving an international climate agreement in Paris this December. The first three posts can be found in my Huffington Post archive. 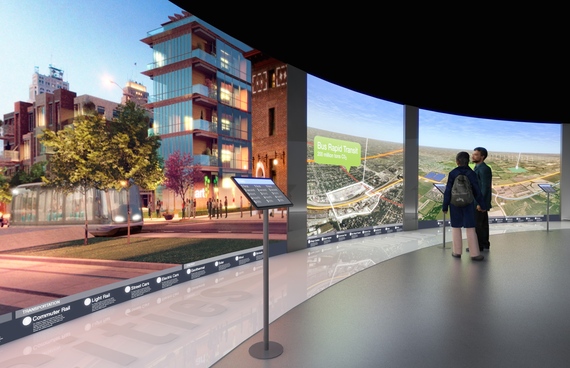 If we wonder why the international community has labored for 20 years without reaching a final agreement to confront global warming, we might consider what the dominant narrative has been. It has been mostly about constraining progress and apportioning limits.

It is time to change the conversation. It should be about a race to the future -- a 21st-century, global Marshall Plan that builds the capacity of nations to achieve sustainable prosperity. Before going into this idea further, let's unpack the invalid logic chain that has been implicit in climate negotiations so far.

The first assumption is correct. The second can only be invalidated by technical fixes that are not yet ready for commercialization, that add to the cost of energy and that create new problems -- for example, more intensive water consumption and storage requirements for carbon capture and sequestration. Assumptions 3 and 4 result in high-level arm wrestling over which nations can, should and will accept limits on their economic progress.

As we might expect, the old logic is reinforced by fossil-energy industries. British Petroleum assumes that fossil energy must remain a major part of the global energy mix to meet the needs of the world's growing population. As a result, BP says, greenhouse-gas emissions will grow 25 percent between now and 2035.

ExxonMobil projects that 75 percent of the world's energy will still come from carbon-based fuels in 2040 while only 5 percent will be supplied by renewable resources. In its assessment of climate risks last year, Exxon brushed aside the finding of climate scientists and international analysts that most of the world's oil, gas and coal reserves should remain unburned. Exxon argued that "the costs and the damaging impact" of a low-carbon world are "beyond those that societies, especially the world's poorest and most vulnerable, would be willing to bear." In other words, economic progress is not possible without fossil fuels.

Other analysts, however, are bullish about the near-term opportunities to fuel economic progress with renewable resources and energy efficiency. They conclude that we now are able to decouple economic development from fossil-fuel consumption in the same way that energy efficiency has decoupled energy consumption from GDP.

Well-regarded researchers have concluded that most, and even all, of the world's energy needs can be satisfied by mid-century with sustainable, affordable and readily available low-carbon fuels. Today, in fact, distributed renewable-energy technologies such as solar and wind power are the quickest and least expensive way to deliver modern electricity to the world's poorest and most vulnerable people. And as former U.S. Treasury Secretary Henry Paulson has written, "The costs of the policies necessary to make the transition to an economy powered by clean energy are real, but modest relative to the risks."

What should the new logic model be?

Second, an array of cost-effective energy-efficiency and renewable-energy technologies are ready today to capture that opportunity and produce invaluable social, economic, national-security and environmental benefits beyond cuts in carbon pollution.

Third, with the redirection of fossil-energy subsidies, and with an international price on carbon, enough capital exists today to make a rapid transition to clean energy.

Fourth, the principal barriers to this outcome are neither economic nor technical; they are the lack of political will, the lack of knowledge and the lack of technical and business capacity.

Fifth, climate change is a wicked problem: If we wait until it becomes so severe that it overcomes the lack of political will, its impacts may be irreversible.

Sixth and finally, to overcome political inertia, the climate talks must give more attention to practical and affordable ways for nations to capture the benefits and global market opportunities of clean energy. With an aggressive effort to accelerate the market penetration of clean and sustainable energy resources, the world's poorest and most vulnerable people -- the same people who Exxon assumes will not tolerate unburned carbon -- will end up with the most advanced, healthy, competitive, resilient and reliable energy systems on the planet.

The reality is that clean energy is the only viable path to progress, and the path is open today. Viewed through the opportunity lens, the future is not carbon-constrained; it is solar-empowered.

The Global Commission on Energy and Climate, whose members include former heads of state, former finance ministers and thought leaders in business and finance, estimates that $45 trillion in new energy infrastructure will be needed over the next 15 years to meet the world's energy demands. International trade in environmental goods and services already has reached $1 trillion annually; trade in low-carbon energy and energy efficiency is expected to climb to more than $2 trillion by 2020, 40 percent of it in emerging and developing economies.

"Low-carbon and climate-resilient growth is possible," the commission concludes. "The capital for the necessary investments is available, and the potential for innovation is vast. What is needed is strong political leadership and credible, consistent policies."

As an outgrowth of climate talks, and as part of longstanding international development efforts, there is a large portfolio of clean-energy technical cooperation programs available to all countries. These programs should be more than tangential to international climate talks; they should be the main event, coordinated in a global Marshall Plan driven by the needs of developing economies but comprehensive enough to meet the needs of all.

The objective should be sufficient commitments by all nations for levels of energy efficiency, renewable energy and natural sequestration to achieve aggressive targets for cutting carbon emissions. Several such targets are included in the options negotiators will be asked to consider in Paris, including a peak in global emissions by 2020 and net zero emissions by 2050.

In the 10 months before the next climate conference in Paris, and during the negotiations themselves, the United Nations can help change the old narrative. It can encourage nations to go to Paris not only with goals to cut carbon emissions but with commitments on clean-energy development not unlike the renewable-energy standards currently in force in more than 30 U.S. states.

The secretary general can set the theme of COP-21 as "Building the 21st-Century Opportunity Economy." Organizers can require that the many side events and exhibits that typically surround the negotiations focus on what the post-carbon world will be like if we put our minds to it. The conversation would engage the power of positive vision alongside the dire warnings of dystopia.

One of the principal goals in Paris should be to shape the many existing international development programs into a coherent campaign to build a clean-energy economy -- an economy that no longer accepts oil spills, water pollution, toxic wastes, ocean degradation, dirty air, mountaintop removal, oil wars, weather disasters, or the potential for nuclear proliferation as the price of progress -- between now and mid-century. One place to start is to empower a program such as Sustainable Energy for All, an existing multinational partnership whose goals include universal access to modern energy services.

In the final analysis, the only thing that will keep us from building the new-energy economy and doing it in time is the belief that we can't. The recognition that we actually can should become the focus of the international conversation about controlling climate change.