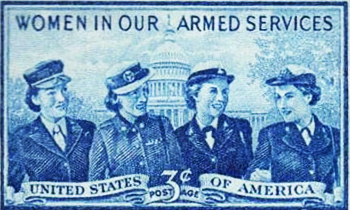 According to the Department of Veterans Affairs, on September 30, 2015, the population of women veterans numbered 2,035,213.

The stories of female vets don't always get traction. In recent years, awareness of concerns like Military Sexual Trauma (MST) have received recognition, particularly through the documentary, The Invisible War.

There are individuals who make it into the public eye. Iraq veteran and Illinois Congresswoman Tammy Duckworth is an example. Yet, the leadership skills and experience that women accrue in the military frequently remain under the radar.

Lauren Zapf, a recipient of the Service Women's Action Network (SWAN) Women Veteran Fellowship in Leadership and Public Policy, wants to change that. I interviewed her about the challenges facing women who have served in the military.

Zapf attended the United States Naval Academy in Annapolis, which accepted its first female "midshipmen" in 1976. She experienced "minority stress" while in attendance, a factor in her advocacy on behalf of those she identified as "underdogs."

"When I left the Navy," said Zapf, "people had negative ideas of women in the military." In steps to recalibrate those perceptions, Zapf has been speaking around the country at conferences. "I want to make sure that the American public gets a comprehensive view of what women experience."

Zapf managed a weapons system during her final tour. A lieutenant, she had twelve to twenty people under her supervision. They were all men. "I felt like I missed out on leading other women," Zapf noted. She held the assignment, and was clear that gender wasn't a factor. "I was able to do what I needed to do," Zapf said unequivocally.

"Women are under a microscope while we serve, and when we come out we are ignored," Zapf emphasized. "When seeking employment women don't necessarily speak about their military experience, because not all women self-identify as veterans." Zapf added, "Employers don't ask, so women fall through the cracks."

Finding a job is particularly difficult for survivors of MST. "They are in constant crisis and don't get the resources they need," Zapf explained. According to Veterans.Inc, women vets face four times the risk of becoming homeless compared to their male counterparts.

Acute awareness of these topics led Zapf to investigate how "interventions" could be best tailored to assist service women. Her background as a veteran and a mental health care practitioner made her uniquely qualified to take on the task. Zapf has a Doctorate (Ed.D.) in counselor education and supervision, and a Masters in clinical mental health counseling.

Zapf is putting into play a "holistic assessment" of the concerns that are endemic to women who have served. She maintains that the emotional and psychological wellness of women must be measured differently than men, and within their contextual circumstances. Zapf believes this approach will establish a stronger voice for service women.

A "comprehensive psychological" survey entitled the Service Women's Assessment of Wellness and Reintegration; (SWAWR) was initiated by Zapf. She created the tool to "benefit mental health professionals in accurately assessing the emotional, social, and spiritual wellness needs of service women seeking counseling." Zapf identified "the most pertinent questions to ask," in order to yield maximum results.

Zapf shared key points that she had presented in her doctoral dissertation, along with findings from the Pew Research Center on Post-9/11 Female Veterans and Their Experiences.

Zapf purposely noted both the positive and negative results from serving in the military.

Central to the construction of her questionnaire was Zapf's inclusion of the concepts of "feminism and social justice" and "betrayal trauma."

Zapf addressed the inherent conflict between the "patriarchal culture" of the military, and the presence of women within. Just by partaking in the system, women are embodying a subtext of pushing back against traditional gender roles.

Betrayal trauma, which can apply to either male or female service members, is particularly devastating to women who have been the victims of sexual assault. They feel betrayed by the "institution" that was supposed to protect them. They lose trust in an organization that doesn't validate their experience, and neglects to redress an aberrant situation.

The first iteration of Zapf's assessment completed, the next step will be to expand the research sample. As the population of service women continues to grow, it is essential that available resources be accessible and equal to the demand.

"I'd like to get this instrument out to as many clinicians in the field as possible," Zapf said, so that practitioners have psychological insights based on "accurate populations cross-section." She underscored the importance of service women being seen as "complex citizens."

Zapf reflected, "It's hard for men and women in the service to be vulnerable, but it can be particularly hard for women to let their guard down."

Jennifer Hogg, co-founder of SWAN, told me by phone, "Part of healing is being honest."

Hogg continued, "The work of Lauren Zapf is so essential. Removing barriers and improving the quality of life for women veterans continues to be a topic that needs much attention, and there are no better advocates for women veterans than those who have served. Honest, frank conversations and access to data that uncovers root causes in military culture, is truly essential for the betterment of all veterans.

Female vets must be recognized as contributing members of society, with valuable abilities and talents to bring into their communities. Zapf's study to ameliorate the lack of responsiveness to the pressures women veterans face is an excellent way to start.