In Olympia, Washington, Marco Rossaire Rossi is running for mayor, but he is running as much to change the culture of electoral politics in Olympia as he is for office. 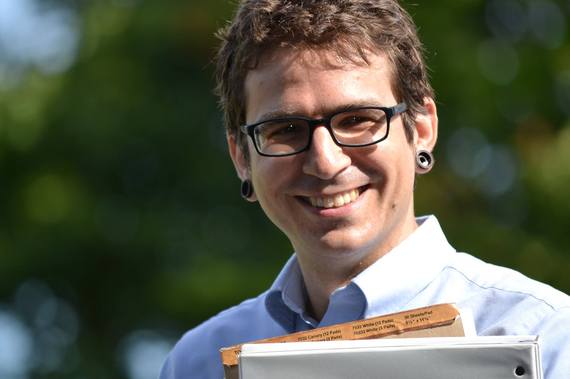 Rossi is running as an independent candidate. His campaign is part of a municipal movement in Olympia called "An Olympia For All." The political movement seeks to use local government to change regressive economic policies to policies that will work for the betterment of the people of the city.

The electoral process in the city of Olympia works like this: There is a primary in August before the November 3rd election. That primary serves to whittle down candidates for contested positions in city government to a maximum of two. The two candidates face each other in the general.

An Olympia For All put forward a slate of three candidates. The three candidates, Rossi for mayor and Ray Guerra and Rafael Ruiz for city council, we're all political novices. As per the primary process, Rossi and Guerra were primaried with the other two candidates for their positions. Ruiz was one of only two people vying for his council position and therefore was automatically sent to the general election.

While Rossi made it to the general election, helped no doubt by the dubious mental state of third candidate Prophet Atlantis, Guerra fell in a tough three way battle with Judy Bardin and Jessica Bateman for City Council Position 2. The loss was disheartening to Guerra, but he hasn't been politically silent. He has been working to elect Rossi, campaigning both on social media and in person for the mayoral candidate. 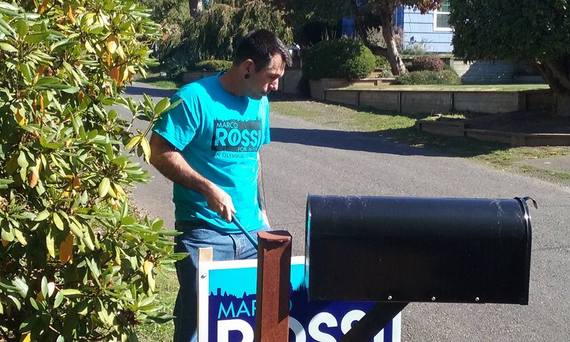 If you are a member of the Democratic Party in a city like Olympia, you have a great advantage. The city simply doesn't elect Republicans. The Democratic Party determines the outcomes of elections. Most viable candidates for public office in the city, then, must genuflect to the party elders and ingratiate themselves for the endorsement and access the party can provide. Rossi has chosen not to do this.

His campaign leans left wing, which is not necessarily a negative in this liberal city. Rossi's campaign, however, leans left wing enough to necessitate running outside of the Democratic Party; in a city like Olympia, that makes the quest for the nomination an uphill climb. It's a battle he welcomes, though.

"We've gone beyond the Democrats completely," Rossi said in a phone interview, "We built our own campaign services; it's a tremendous amount of work." 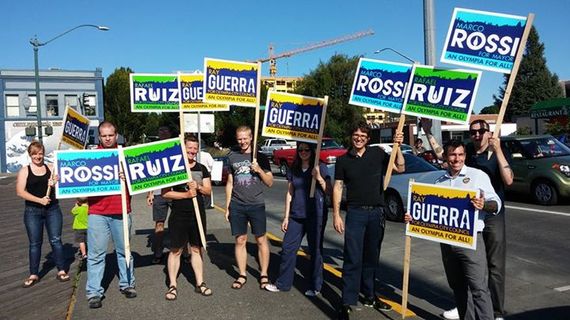 As a nominal Democrat, Rossi's opponent Cheryl Selby has access to a plethora of resources Rossi does not. Those resources include, for example, Vote Builder, the voter database that identifies demographic information for Democratic nominees.

The advantage that this demographic information can give to prospective candidates is enormous. It allows the campaign to narrow the focus of their targeted get out the vote campaigns. Rossi's campaign, on the other hand, must knock on each and every door to get out the vote.

The campaign relies on volunteers who believe in the candidate, not the party. While this may sound romantic and while it does produce a passion his opponent's campaign may lack, it also risks burning out the volunteers and the candidates. In fact, it already has.

The aforementioned Rafael Ruiz, who ran with Rossi and Ray Guerra on the Olympia For All party platform was forced to drop out of the race after watching the toll it took on his family and work lives. A lack of support from a party machine and the need to work for a living made a drive for city council unrealistic for Ruiz. While his name remains on the ballot, he has stopped actively campaigning.

Rossi garnered 27 percent of the primary vote to Cheryl Selby's 69 percent, good enough for second place and to make the general. It's true that Selby more than doubled Rossi's votes. But it's also true that only eight thousand Olympians voted in the primary; that number only encompasses 20 percent of the registered voters in the city.

The lack of voter participation in Olympia, as Rossi sees it, is indicative of a larger issue: the electoral political culture in the city. "The alienation and disgust people feel from politics is to a large extent justified," he said, "But a strategy of absenteeism doesn't seem to work to create the type of society we want."

Rossi hopes to incorporate the critiques of the electoral system into Olympia city politics. Critiquing the electoral process is important, but doing so without becoming insular and apathetic is equally so. "We need to hold the critique and also engage to create stronger movements. I'm hoping our project becomes inspiring for people." 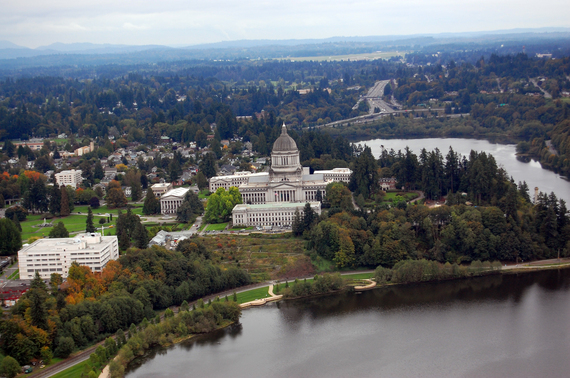 Rossi says that changing this electoral culture is one of the two main thrusts of his campaign, along with a fundamental shift in how the city government works for the people.

The shifts in focus for city government that Rossi envisions include structural changes that can determine how Olympia represents its people. Rossi hopes to introduce a district system for electing city council members. A district system will allow each community in the city a better chance at direct representation.

Olympia city council members are elected on a citywide basis. This leads to what Rossi describes as a concentration of voter power in the hands of the more affluent members of the city's citizenry. More affluent people are more likely to vote as a general rule, and in a city like Olympia, with no districting, it means that a relative minority within the city has an outsized influence on the entire council. Districting can change that.

Olympia is projected to grow by as many as 20,000 people in the next 20 years. That population growth and a lack of proper representation is a major concern for Rossi and his supporters. "I'm afraid," said Rossi, "that we'll see a very divided city [if districting is not implemented]."

It's not only voting and representation where the more affluent members of the city have an advantage. Running for office in and of itself is a game for the well to do.

"Affluent people have an easier time getting elected to office because they have the time and better access to resources," said Rossi, who, in contrast, works over 40 hours a week while also campaigning. It's an exhausting schedule that puts him at a disadvantage against Selby. 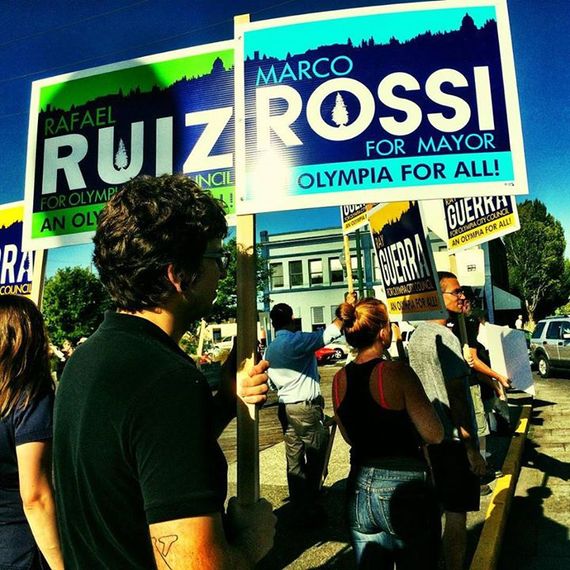 Rossi is running on a variety of issues that all revolve around solving the problem of staggering economic inequality that Olympia, like the rest of the country, is no stranger to. Raising the minimum wage, establishing a tenant's bill of rights, and opening unoccupied buildings downtown for the homeless for shelters are some of the policies he hopes to address as mayor.

Olympia also has not been a stranger to the nationwide problem of police brutality. In May, an Olympia police officer shot two unarmed black youths in the back. The attack led to massive protests and calls for police administrative change from the community. To face this problem head on, Rossi proposes a citizen's review board to hold the police in Olympia accountable for their actions. He also favors new training in non-violent conflict resolution for the city's police force.

When asked about how easy he thinks working with the city council will be, Rossi replies that he is optimistic: "I think we can work together. Some issues will be easier than others." The mayor has no greater voting power than any other council member in Olympia, but can set the agenda. Bringing issues he cares about to the council is the main way that Rossi hopes to affect change.

Rossi's philosophy about politics is as pragmatic as his ideas are radical. "We should reach for the highest rung in the ladder of progress, but take the next highest one if that's all we can achieve in the immediate term," he says. Thus even if Rossi doesn't win the mayor's office, he hopes his run will get the second best result: changing the culture of electoral politics in the city he calls home.