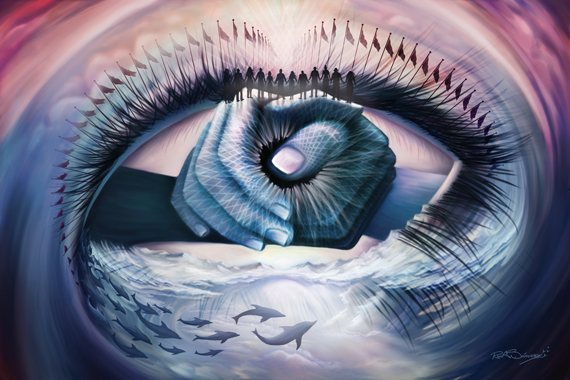 "One Vision," Artwork by Rod Sánchez

In our increasingly interconnected world, the negotiating game is changing. Expert negotiators are no longer seeing negotiating as an opportunity to win, but as an agreement and relationship builder. Whether we are engaged in the ongoing French negotiations for the 35-hour work week, are involved in typical business salary negotiations, or just need to adjust that cell phone contract, we can readily see the importance of arriving at good agreements that create a win-win for all parties involved. But what subtle factors matter most when conducting a negotiation in all aspects of life?

Whether you are negotiating in the professional context or in social situations, the following 6 principles are key to knowing how to negotiate effectively to create the "buy-in" essential for success in any form of partnership bargaining:

In a negotiation situation, we tend to first strategize based on our own interests, but recent studies show that negotiating for a win-win outcome is key to long-term success. Many times we take the detour around rapport and relationship building, instead negotiating to independent advantage, where each team aims to get the best deal (such as in private sales, at the customer service counter, or while discount searching) or with conflict resolution in mind, where one team aims to win and cause another one to lose (think of custody battles, warranty disputes, or compensation discussions.)

Whether a negotiation is exploratory (possible areas of interest) or conciliatory (resolving differences), it is always important to keeping the relationship in mind (and not solely rely on individual preconceptions to the outcome of the negotiation). As notable philosopher and statesman Sir Francis Bacon says "A wise man will make more opportunities than he finds." You never know what future opportunities a partnership can bring.

According to Bill Scott, of the Gower Handbook of Management, in preparation for a negotiation, first identify what the other side will be happy to gain and then forfeit what you can in this area that is low-cost to you yet valuable to them. If the other party feels that they are winning concessions, they will, ultimately, be more likely to concede on issues that are important to you.

However, Gavin Kennedy of The New Negotiating Edge, says that we must not get trapped in the extremes of giving and taking behavior. Instead, we should engage in authentic trading behavior and focus on people as they are, not as how we want them to be. When we focus on agreement as a broad principle, we are more likely to arrive at a settlement that both sides feel is to their advantage.

Conflict is sometimes unavoidable on the road towards agreement and can lead to a complete breakdown of negotiations. But, if an agreement seems impossible, focusing on the partnership can salvage most negotiations, according to Gottschalk Harley-Brewer, in The Pocket Negotiator. When conflict arises, try emphasizing the loss to both sides of not reaching an agreement, inventing new options for mutual gain, or changing the "negotiating package." If necessary, adjourn to think and reflect, change location, change negotiator, or bring in a third-party mediator.

But reducing conflict does not mean that we instinctively give up on tough negotiations. Some people negotiate as long as possible until reaching their Best Alternative to a Negotiated Agreement (BATNA.) - a result of careful planning and outcome preparation. Even if you have to take a break before coming back to the topic, always summarize progress and areas of agreement. But walking away from the partnership should be a last resort.

To negotiate effectively, you must be mindful of how you frame your exchanges in a negotiation. Simon Sweeney, author of Communicating in Business, outlines one important "do and don't" for negotiating: summarize or ask questions instead of criticizing. It may be tempting to tell another party that their prices are too high, their delivery was wrong, or their decisions don't make sense, but you can lead others to see things from your point of view by summarizing or paraphrasing any inconsistent terms back for further discussion, or by asking a constructive question that builds a quest for understanding rather delivering a statement than sows conflict. Trust is essential to encouraging others to move beyond their own interests and collaborate with you. In his book, Negotiation Boot Camp, Ed Brodow recommends active listening as a critical negotiation strategy. Instead of finishing other's sentences or simply waiting for the next opportunity to plug your needs, give indications that you are being attentive, such as nodding your head or repeating what others have said. Doing so not only causes the other party to feel respected, but also builds trust -- one of the most important elements of a negotiation. Culture affects negotiation in every country. Geert Hofstede concluded that "cultural dimension" among national societies can also affect negotiations. Out of respect, low-individualistic cultures (eg. Spain, India, Japan) will appear to say "yes" when they really mean "no." At times, these cultures will say "we will try our best," which often translates to "no, it is not possible" to "high individualistic cultures" (e.g. United States, Australia, England.) The Harvard Business Review recommends that effective negotiating resides in adapting to a cross-cultural conversational style that avoids "yes" / "no" questions (closed questions) and, instead, asks more open-ended questions.

At a global level, negotiating skills may be the key to bridging differences and arriving at an evolved exchange of ideas and values. According to Chester Karrass, the effective negotiator engages in a strategic planning that is concerned with long-range goals and values. Those that focus on relationships and partnerships are the most successful negotiators in the world. Be a creative negotiator that looks for agreement, mutual gain, and long-term partnerships, and you will arrive at successes you can build on for many future negotiations to come.