The future of America is on the red alert now. Most of us have endured through bad times by losing jobs, letting our homes be foreclosed, and living on food stamps or grace of our friends. We have seen the ravages of budget deficit and sacrifice of thousands of Americans in wars and devastation of other nations, and finally we have a grip on the situation.

Obama has set in motion the process of stabilizing the economy, and we are cruising through it toward restoring America. We are right on the trajectory. Romney on the other hand is inclined to upset everything and will take us back to the Bush era on his first day in the office, if he were elected. Why on the earth would we want to choose chaos over stability? 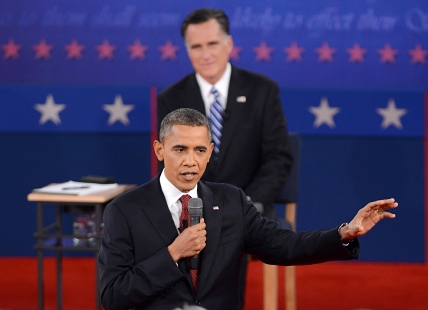 Obama has brought stability after the chaotic wars in just four years.

Those who do not have a clue about foreign policy, including my friend Sean Hannity, believe that it is easy to bully other nations and get away with it. That's not how it works out. We may get away for the time being, but we become vulnerable and live with unease, discomfort and apprehension any where we go. If we push around others, we may have to live in cages to protect ourselves. That is not us, we are a free people and want to breathe freely and live freely without fear.

Foreign policy is based on relationship between the peoples, and not between dictators or individuals. Ultimately it is the people who honor the treaties and not the individuals. Dictators come and go, but relationships between nations endure. Had we supported the oppressed Iranians against the Dictator Shah, Iran probably would not have gone fundamentalist or even theocratic; they would not have held us hostage either, as we would have been on their side.

Tonight, President Obama and his challenger, Mitt Romney, will debate on foreign policy, and on Wednesday, Sean Hannity and I will be on nationally syndicated radio to dissect the debate.

Obama has decimated Al-Qaeda and got rid of Bin Laden and Awalaki with least collateral damage, without the loss of American lives and the Afghan, Yemeni or Iraqi Civilians. No one significant has cried about the death of Bin Laden or Awalaki. Had President Bush followed Obama policy of getting the wrong guy, instead of his religion and his country, we would not have seen the devastation in our own country, let alone others.

He has pulled our troops from Iraq giving a breath of fresh air to our soldiers. There is an average of one suicide a day, this strain on our men and women has to stop and I am glad the wars are coming to an end now.

Obama rightfully sided with the public in Egypt, rather than dictator Mubarak. The diplomatic genius of Obama managed the affair smoothly without anti-American demonstrations in Egypt; the public saw us as their ally and not a supporter of their oppressor.

This is a major paradigm shift in our foreign policy and a successful model for many nations and many years into the future.

Obama has given more aid to Israel than any other president; he is for Israel's security without pandering to Netanyahu and his right wing bullies, and clearly retaining full Jewish American support. Most presidents would have caved into Netanyahu and further alienate Israel in the community of nations, making it more insecure. Obama's policies will bring security to Israel, and minimize anti-Semitism around the world and enhance respect for Israel.

Obama will do the right thing: bring enduring security to Israel and Justice to the Palestinians (one does not happen without the other). We need to give him four more years to complete the job.

The short sighted Prime Minister Netanyahu jumped on Obama for not supporting Mubarak, what he failed to see was that the peace treaty was between the people of Egypt and Israel, and not between Mubarak and Netanyahu. Had Obama pandered to Netanyahu and the front runners in the Republican primaries, the newly elected government in Egypt would have flagrantly rejected the peace treaty.

The cornerstone of Obama's policy is justice; justice is the only thing that will earn us genuine respect and sustainable security for all.

Obama will go to war, only if necessary and not based on false intelligence as we have done over and over in the past.

Romney has a record of pandering to the conservatives to get the nomination, then like a chameleon he modified himself to earn the support from the independents, meanwhile betraying both the conservatives and moderates. We don't know which avatar of his we can count on.

Romney's loyalty is to Netanyahu (not Israel), and he will threaten to go to war with Iran. When you give an opportunity to an irresponsible urchin, he will threaten every one without any idea about the consequences. The war will destroy America before it destroys Iran, but Romney does not have to worry about it. He has never put a hungry child to bed, and he never had to scramble for pennies to feed his children. He has plenty stashed up to last for a lifetime, so he can gamble on the lives of ordinary Americans.

He would have bombed Libya and bombed Syria and with that bombed our economy.

China is our biggest trading partner, by labeling it a currency manipulator on his first day in office, Romney will screw up our good relationship that was built from the Nixon days. We have problems with China, and we are capable of finding solutions without throwing fits. The power comes through effective solutions and not rhetoric to please the blood thirsty, chest thumping macho men.

Romney has not matured in his convictions; he is in the experimentation stage, trying to see which statement will work. Sadly, he has surrounded himself with Bushmen, and he is stuck. He also has two different views, a private view that he shares with the ones who give him money, and the public view that gives the appearance of inclusiveness. How deep is either view? God only knows. I don't know which Romney I will get at the end. Even the GOP is not sure.

Obama is a sure thing; he will keep everything intact; he will not turn things upside down.

Unemployment will gradually but steadily will go down. Women can continue to feel secure, he will not repeal the Equal Pay Act, equal insurance premiums for men and women, Roe v. Wade or "Don't ask, don't tell." And he will keep the veterans' benefits intact.

As Americans, both Democrats and Republicans, we owe him another four years to bring full stability to every one of the Americans. No American should have to feel apprehension, discomfort or fear of the other.

Romney has to figure out if he is a moderate, conservative or the one for himself. Now if we the Republicans wake up to save the nation from chaos and move even two points toward Obama and give him 53 percent and dish out the 47 percent to Romney (LOL), we will save the nation.