"Insects are environmentally friendly and extremely nutritious," Crowley told The Huffington Post. "But the largest hurdle to the industry is the psychology."

Crowley, a surf and rafting guide and world explorer, had tried eating insects during his global travels. After watching Marcel Dicke's TED Talk on the benefits of an insect diet (better nutrition with a significantly lower environmental impact), he became determined to make the practice more than just a daring experience.

"I went home and tried to catch some bugs, but I was terrible at it," Crowley said with a laugh. "Eventually I just ordered them online."

Crowley pitched O'Neill on his idea for a new company over some cold beers and a side of sautéed crickets. O'Neill, a financial analyst with a knack for business and a serious adventurous streak, was hooked.

Now, O'Neill and Crowley are insect-eating evangelists with a marketing campaign that just might work.

Eating insects itself is nothing new in San Francisco. Last year, Don Bugito created buzz with its wax moth larvae tacos and ice cream with mealworm sprinkles. But for the less adventurous, forking down the bugs can be a bit tough to swallow.

"Some people have trouble with the cultural shift, so we really researched how to approach that," Crowley explained.

For inspiration, Crowley and O'Neill looked to the California roll, which served as sushi's entry point into the American diet.

"The California roll was very strategically developed," Crowley said. "They replaced some of the fish with avocado so people would get used to the texture; they flipped the nori inside-out so people wouldn't be intimidated by the seaweed. It made it easier for people to take that first step."

Instead of presenting customers with whole bugs, Chapul starts with a flour of ground crickets and fills the bar with dates, nuts, agave, ginger, coconut and other tasty ingredients. A spoon full of sugar, indeed.

And cricket bars are just the start. "We're dipping our toes in the water, but we already have other products in mind," he added. Next on the list: bug burgers.

Want to try some cricket bars for yourself? Donate $20 to Chapul's Kickstarter program and O'Neill and Crowley will send you a box.

In the meantime, check out some of San Francisco's other strange food success stories in our slideshow below: 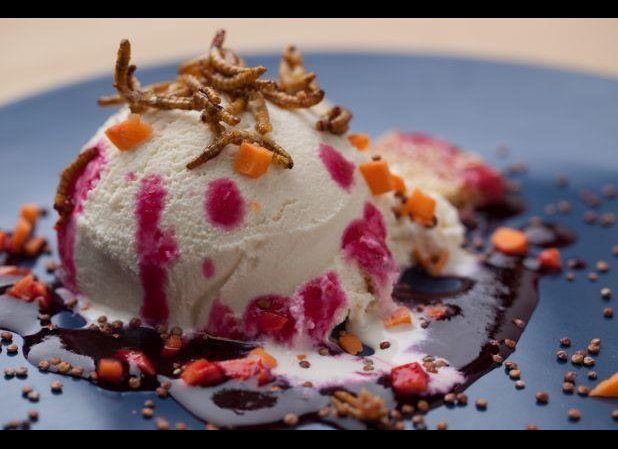 1 / 4
Don Bugito
<a href="http://www.donbugito.com/" target="_hplink">Don Bugito</a> skips the packaging and cuts to the chase with larvae tacos and ice cream with mealworms. Mmm.
Don Bugito