After calls on Twitter to #TakeDownThatPost, Christian news outlet Charisma News has pulled a hateful piece that celebrated Islamophobia.

On Friday afternoon, Charisma News published “Why I Am Absolutely Islamaphobic,” an op-ed written by Gary Cass, a Christian who has identified himself as a former pastor. In the post, Cass defends his view against Muslims, saying the Islamic State militant group also known as ISIS is “doing to American journalists what every true follower of Mohammed wants to do to you and yours; subjugate or murder you.”

Cass went on to say that there are only “three possible solutions” to “deal” with Muslims: conversion, deportation or violence.

“The only thing that is biblical and that 1,400 years of history has shown to work is overwhelming Christian just war and overwhelming self defense,” he wrote. “We must be prepared for the increase of terror at home and abroad. This is not irrational, but the loving thing we must do for our children and neighbors. First trust in God, then obtain a gun(s), learn to shoot, teach your kids the Christian doctrines of just war and self defense, create small cells of family and friends that you can rely on if some thing catastrophic happens and civil society suddenly melts down.” 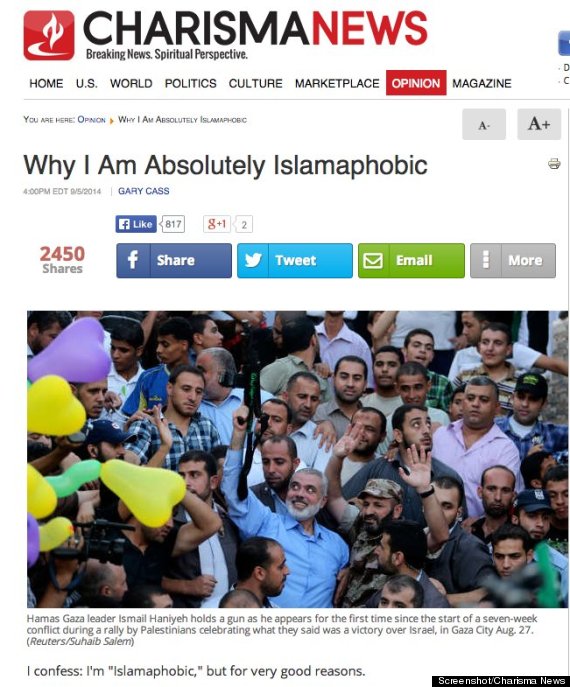 Over the weekend, several netizens, many of them Christian, expressed their horror at Kass’ op-ed. Using the hashtags #TakeDownThatPost and #CancelTheCrusades, they called for Charisma News to pull the post from its website and to offer an apology.

@charisma_news publishes articles promoting genocide. As a Christian I reject their attempts to incite violence. #CancelTheCrusades

Dear @charismamag, you do not speak for all #Christians, please #CancelTheCrusades!

I'm disgusted by the op-ed posted by @charisma_news calling for genocide of Muslims. #cancelthecrusades #takedownthatpost

Encouraged to see Christians from a variety of traditions urge @charisma_news to #takedownthatpost calling for genocide against Muslims.

As backlash mounted, Charisma News pulled the post from its site Sunday. However, at the time of this writing, the website has yet to issue an apology.

@charisma_news Thanks for removing that foul opinion piece by Cass. Now we are awaiting a statement and an apology.

It seems @charisma_news took down the article that said Muslims should be deported and there should be mass violence against them. Apology?

These netizens aren't the only group of individuals who have made headlines recently for taking a stand against Islamophobia.

On Saturday, it was reported that family members of Sept. 11 victims had launched a new bus ad campaign designed to promote religious tolerance.