According to Giving USA, total charitable giving in the U.S. reached $373.25 billion in 2015, a 4.1% increase in current dollars and a 4.0% increase in inflation-adjusted dollars. Approximately 71% of those donations came from individuals.

Giving USA: The Annual Report on Philanthropy is the longest running annual report on U.S. charitable giving and estimates sources of giving and amounts received by type of organization. The report was established in 1956 by the American Association of Fundraising Counsel, now The Giving Institute, and is made possible by contributions from The Giving Institute member firms, foundations, and other donors. Giving USA is researched and written by the Indiana University Lilly Family School of Philanthropy.

This is the sixth consecutive year of increases in giving, a period of growth that began in 2010. But there are some important changes in the data worth noting. Let's dig into the detail behind some of these findings.

The percent of overall giving from individuals dropped from 72% to 71% in 2015. Giving by foundations, which includes grants made by independent, community, and operating foundations, grew from 15% to 16% percent of all gifts made in 2015. 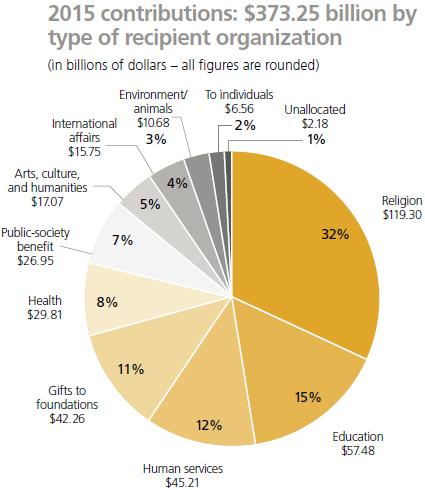 Where Giving Goes
Giving USA also reports that 70% of all charitable giving in the United States goes to religious organizations, education institutions, human services nonprofits, and gifts to foundations. The remaining 30% of giving goes to heath, public and society benefit, arts, culture, and humanities, international affairs, environment and animal welfare, and gifts to individuals.

In 2015, International Affairs organizations grew by 17.5%, the largest of any group. This is in large part to the tremendous amount of giving towards the Nepal Earthquake in 2015. Gifts to Foundations actually saw a decline of 3.8% in 2015 and this was the only group that experienced a drop in giving.

The two year cumulative change in giving, across both 2014 and 2015, shows that arts, culture, and humanities organizations have grown the most with a 20% growth rate. That's followed by education nonprofits at 16.4% and environment and animals organizations at 16% growth. Giving to foundations has grown the least over a 2-year time period with 2.8% growth.

Looking Ahead
The new trends reported by Giving USA are helpful to understand changes in the nonprofit giving landscape. Giving continues to grow in a post-recession environment. Some sectors are experiencing some change in giving patterns. Changes in both who is giving and the organizations receiving the donations is something to continue monitoring.

Another resource for nonprofits to use to understand the latest giving trends is The Blackbaud Index, which reports on both overall charitable giving trends and online giving results on a monthly basis. Through April 2016, overall giving is up 1.6% on a year-over-year basis and online giving is up 9.2% for the same time period. This is based on an analysis of $19.7 billion in charitable giving data from nonprofit organizations and $2 billion in online giving.

To get the complete Giving USA 2016 report please visit: www.givingusareports.org.

VP of Data & Analytics at Blackbaud