When I stepped off the plane in Tigray, northern Ethiopia -- a region bordered by Somalia and Eritrea -- I truly did not know what to expect. Many of my generation vividly remember the pictures of starving children with distended bellies and we have the word FAMINE burned into our brains as a result. We ate every Brussels sprout and string bean during that time as our mothers reminded us of the suffering these children were experiencing. The name Ethiopia itself takes us to a land far far away and in truth, it is. So when I arrived with a small group of people brought together by Scott and Viktoria Harrison of charity: water, I turned to them to search their faces for knowledge and understanding and answers.

A few in our group had been there before and seemed at peace to be back. The rest of us were wide-eyed and, in my case, pretty sure our plane had gone into a weird portal back in time. To be fair, in Tigray's capital city Mek'ele, some modern conveniences were found, like Pepsi and WiFi and pizza. But as we drove just outside of town on merciless, unpaved roads, we saw towns built out of rubble, goats and cows walking along by themselves or being minded by 6-year-old shepherd boys who work all hours of the day.

We also saw water. Bottles of it being sold for more money than the locals can afford on a regular basis. But that's not the water I am talking about. Jerry cans -- a gift from the Germans from WWII (not something you hear said all that often and I say it with some sense of sarcasm). Jerry cans are the plastic yellow containers that were originally made to carry fuel in a lighter fashion during WWII and are now EVERYWHERE on the streets of Ethiopia and, in fact, everywhere in the world where water is in short supply. The Jerry cans hold water for women and children as they carry to their households. In "bustling" Mek'ele and many other towns, most water comes from a clean source and the distance to their homes is relatively close.

We were not there to see Mek'ele. Very few people in Ethiopia live in the cities or towns, but in in rural remote villages where they have lived for generations. We would drive for hours through rough, rocky terrain and be met by countless women and children along the roadside who, despite their struggles and hardship ahead, always seemed to greet us with smiles and waves. Women had Jerry cans tied to their backs and kids were herding animals. Their homes were nowhere in sight. These are the exact people who were affected by the famine in 1983-1985, which had to do with a harsh collision of drought and civil war. It was during this time that 400,000 people died because of no access to water. And in 2012, more than half of Ethiopians still do not have access to water.

Women and children are the sole bearers of responsibility in Ethiopian society. There are some water sources (not clean or safe for the most part), but there is just no land left and these water sources are occupied. Women have to walk long distances over incredibly rough terrain for hours each way, in some cases. They return with Jerry cans that weigh 40 lbs and are filled with contaminated water containing diseases, leeches and parasites, or everything in between. I can try to paint the picture, but it is hard to believe until you see it for yourself.

So that is why we were there this past February with charity: water to see and experience it for ourselves. I am not a marathon runner, but I do Pilates and cardio, run blocks and blocks in NYC in very high heels, so I think I can navigate my way around treacherous terrain. In one village, it took everything I had to just make it down the rocky cliff following the route women and small children take to fetch water. I nearly lost my footing several times, which would have resulted in significant injury and the entire time I was struggling to get down I thought with dread that I had to go back up eventually. Hhiking back up the rocks to the village in the afternoon heat, in all honesty I thought I was not going to make it and held it together as best I could, but it was rough. Meanwhile, I was not carrying 40 lbs or more of water on my back as the women do every day. I just cannot imagine it.

Here's the thing. Water exists. In Africa. In Northern Ethiopia. It is far below the ground but it is there. And charity: water believes that everyone is entitled to it. So for the last five years, they've worked with NGOs on the ground, hydrogeologists and countless volunteers and donors that provide drilling machines. They've been digging wells and giving people access to clean water for the first time in their lives. Not a few feet to get ground water, but hundreds of feet underground -- deep enough to where the water that comes running out of the wells is pure. We saw villages that had no access to clean water and no hope whatsoever of seeing it. I thought perhaps they saw us as deliverers of false promises due to unmet promises of the past. But their eyes filled with tears when the water came exploding from the ground after teams of workers and hydrogeologists and volunteers working the rig struck water. We were told that in one village, one elderly woman broke down in tears crying over and over, "There was water beneath our feet this whole time?" Yes, this whole time.

Almost 800 million people on earth live without clean water. We can change that. We can eradicate that. I am not saying it is easy, but it is possible.

I gave up my birthday for charity: water with the high hopes of raising $38,000 for my 38th birthday. I gave myself a window of 50 days, hoping I would raise enough for 7+ wells which would be in honor of my mom and dad, who I lost 15 years ago. In 4 days, I have raised $49,000 from friends and strangers alike. The power of social media has made people I have never met give to this fight and spread the word to their own networks. I have received donations from people all over the world and they keep coming in. 100 percent of donations go to the building of water projects, and every single dollar is tracked to the projects on the ground, and proved using photos and GPS.

Water is life and I am proud to be involved with the remarkable people of charity: water changing lives every day. 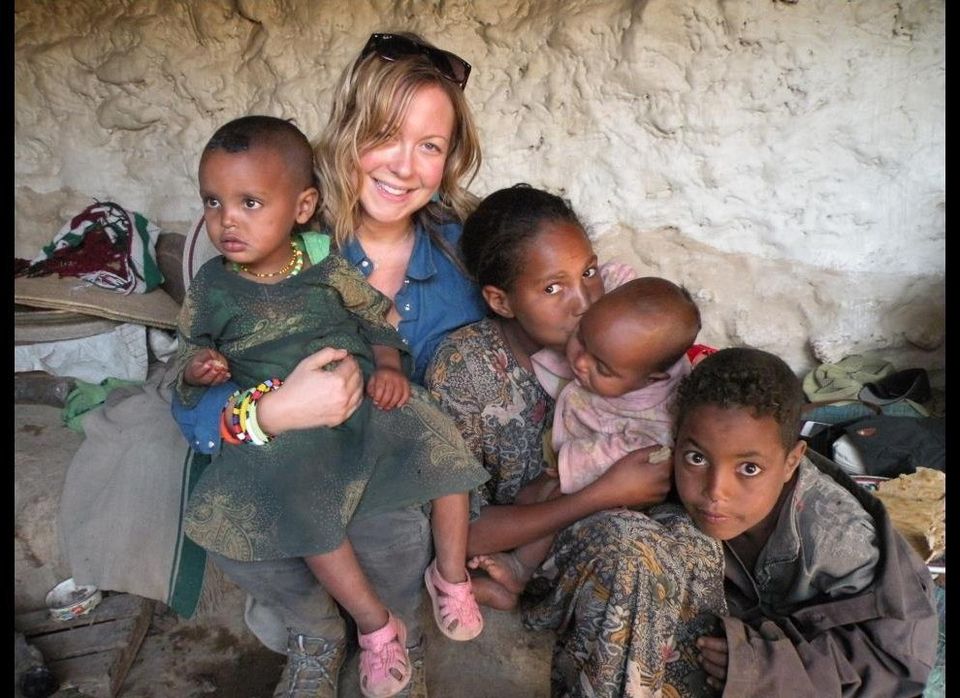 1 / 6
Visiting the kids in their house