The fall is my favourite season. The weather cools down and the baseball season heats up (have you seen the Toronto Blue Jays lately...). And for me since 2009 it also means charity: water's September campaign. As a known and unabashed admirer of Scott, his team and their work, I always look forward to seeing what they will do with their September campaign.

This year is no different as they push the envelope even further with their peer-to-peer fundraising focused initiative. Launched every September, thus called the "September campaign", this year's 'theme' is #nothingiscrazy and it puts everyday people -- like you and me -- more front and center in the campaign than ever before.

The campaign showcases the amazing stories of people from the past who have raised funds for charity: water doing things like eating, marching, biking, etc. while encouraging others to join and get involved.

Here's their latest launch video and a few of the key lessons we can all learn from the newest version of charity: water's September campaign:

1. They Make the Fundraiser the Hero

Hmm... where have you heard that one before? Your fundraising should think of donors more as customers who choose to make an impact through you as opposed to ATM's where you can punch in numbers and make withdrawals when you need to. That's why I love the donor/fundraiser as hero concept. It quickly, clearly articulates who your campaign, messaging and fundraising is for; them.

Notice how in the video, charity: water's impact around the world is stated in the context of someone else's story. Jennifer is making a difference in Ethiopia and Uganda. Chris is making an impact in Rwanda. Noah is funding projects all over the world. charity: water is making their case (need, solution, and impact) but they are doing it through short stories of their supporters and not the organization itself.

It's one of the things charity: water has done so well over the years is that they not only communicate this hero message well, simply and beautifully but they live it out. I was lucky enough to spend some time at charity: water's office a few years ago and was amazed at how much they cared for their donors. All their donors, not just the ones who have a higher ROI. It's the living out of this hero focus that makes their brand so good and so hard to replicate.

Making donors and fundraisers the hero of the story involves more than creating a great video. It's about embodying that spirit in your core.

2. They Challenge and Inspire People

People are asked to do things all the time. But rarely are they challenged to do them. And that's a big difference. I believe humans are innately competitive and social beings yet most of our fundraising and communications do not acknowledge or tap into these areas. charity: water is very intentional about which stories they share to challenge and inspire people.

Take their launch video for example. They share three main stories of people; a World Record breaking athlete doing wheelies, a woman sewing and selling coffee tote bags and a boy in grade 7 teaching classmates and friends how to weave. All three of these stories should challenge and inspire people:

The World Record breaker is inspiring. "He broke a world record and did it for charity. Wow. What a guy. That's so cool. I wish I could do something like that."

The woman is relatable. "She just sewed coffee bags to make satchels and resold them? That's pretty cool and pretty easy. I could something like that."

The 7th grader is challenging. "Man, that 7th-grade boy is doing some pretty cool things. What was I doing in grade 7? I should do something."

There's a good chance you aren't challenging and inspiring your donors enough and when you do, think about the stories you can use and showcase to do so.

What if charity: water just had those stories on a blog somewhere? Would it have the same impact? Probably not. Adding visual elements to key stories through things like videos, images and infographics is increasingly important. Especially for launches and campaigns that, in theory, build momentum as they go and are supposed to be more social and sharable.

In addition to those three challenging, relatable and inspiring stories, the launch video is chock full of other examples and ideas -- some visualized and others just mentioned. Jumping in a lake, bungee jumping, selling lemonade, hiking a mountain, biking, swimming, rock climbing... the list goes on. All of those visuals and mentions help the viewer identify something they can do or would like to do.

Their social media is littered with these examples as well with different examples on Instagram... 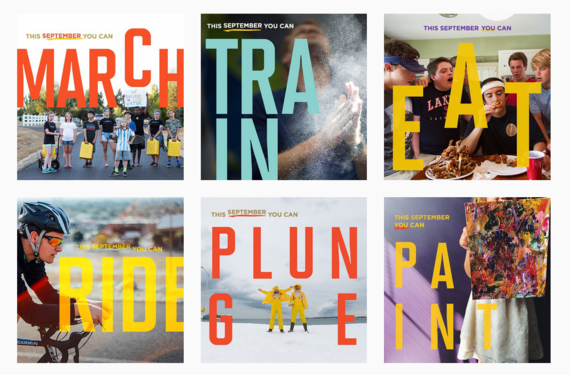 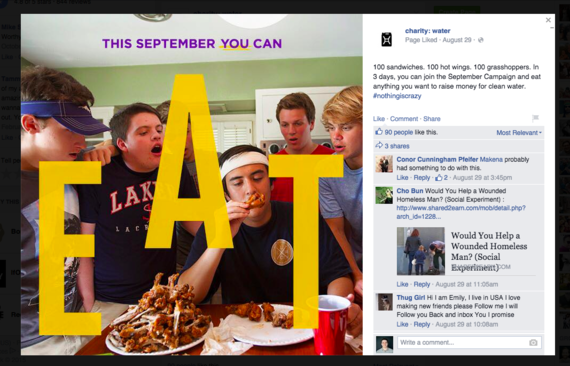 Putting your key messages and stories in a visual element makes it easier for people to engage with the content and pass it on to others.

One of the things charity: water does really well is use social proof.

Social proof, also known as informational social influence, is a psychological phenomenon where people assume the actions of others in an attempt to reflect correct behavior for a given situation.

When we see others do something desirable, we inherently also want to do that action or are at least more likely to take that action ourselves. It's another reason why telling those hero stories is so important. They should take this even further and have the number of people already involved or committed and, if possible who those people are if I'm connected to them.

Throughout the year, they also get people to sign up and pledge to give up their birthday, and fundraise, or be a September campaign fundraiser. This taps into the idea of commitment - where we are more likely to take complete an action once we have said we will do it. Leading up to the launch, they can just remind these people, as well as past September, fundraisers that it's time to fundraise.

And for this year's campaign, charity: water is also tapping into scarcity (or exclusivity). Their September landing page leading up to the launch had very little information on it other than a field for a password, if you have one, and a button to request access. 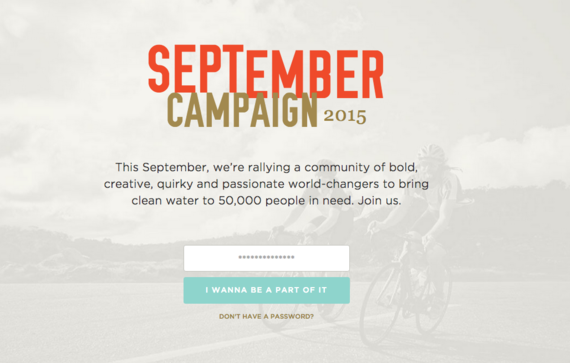 When things are exclusive or scarce, it makes us want them more. It's why Apple limits how many phones are released so people have to wait in line to be first. It also makes those people waiting in line or who get their iPhone first feel even more special. Scarcity creates more demand in people wanting to get 'it' and provides more reward to them once they get 'it'.

By combining great visuals and stories with some 'science' on humans behave, think and interact, charity: water is increasing the chances that their campaign will be appealing, stick and spread.

You don't have to be charity: water to create a good campaign and a crazy good launch. Focus on your customers and make them, and treat them like, heroes. Challenge and inspire people to do something bigger than themselves and when you do be sure to show and tell them (with examples). Lastly, understand as much as you can about social factors and bake those into your marketing, messaging and launch. Good luck!

This was orginally posted on re: charity and can be found here.