Here's a piece of art. Will you smash it?

Of course you won't.

But what if I told you that the art had Hitler's head on it?

And what if I told you the artist who made the art was recently exposed as a Nazi sympathizer?

And then what if I told you the art was originally owned by a Jewish man who had never known that the artist was a Nazi sympathizer but had bought the art believing the work meant something that it really didn't?

This is a follow-up to a story that's already been widely discussed, so I'll keep the background short: Last month I blogged about an article by Stranger writer Jen Graves about Seattle artist and ceramicist Charles Krafft. As it turns out, Krafft, who has been making money for decades selling works of "ironic" art involving violence, Nazis, the Holocaust, and images of Hitler has recently revealed himself to be an actual Nazi sympathizer and Holocaust denier.

Since so many of Krafft's pieces involve images of Hitler and the Nazis, this naturally was a rather disturbing turn of events. As I wrote in my first blog post, to make this kind of art meant that Krafft's widespread acceptance as an artist rested on the belief that he held personal political views that were generally in line with the rest of the art world, i.e. anti-fascist and liberally tolerant. No one ever considered the possibility that Krafft's more controversial works of art were in any way, well, sincere.

(If you're just catching up on the story now, no, I'm not going back over the damning evidence against Krafft, but you are welcome to go back and read Graves' widely circulated story).

The most outrageous detail in the story about Krafft, arguably the detail that helped launch the story from a regional scoop to a viral international story, involved Sandy Besser. Besser was a Jewish collector who owned a bust that Krafft made of Hitler; the bust doubled as a teapot. According to a curator in San Francisco familiar with Besser, "The collector died before ever learning of Krafft's real views." Had Besser known of Krafft's warped ideology, the curator said, "he'd probably have smashed it."

It was a pretty appalling detail, and I was moved to write, "I have a really hard time feeling anything but sympathy, sadness, and anger for the Jewish collector who was conned; I feel that way even though the man didn't live long enough to learn that he was actually the butt of a very sadistic joke." The story about Krafft exploded all over the Internet, including a number of non-English art sites. I was very quickly quoted by the Southern Poverty Law Center, then by Salon.

Here's what happened next. I got an email one morning from someone named Matt Besser. The email read:

"My dad was the Jewish art collector, Sandy Besser. You know the more I look at the [Hitler teapot my father bought], the more it is obvious that [it] is indeed ironic and a critical satire of Hitler. I don't think [my dad's] teapot emulates Hitler, in fact in makes him look both silly and evil at the same time. So just because Krafft is an anti-Semite, to me it doesn't change the meaning of the piece. It just shows how confused-crazy-bipolar-old-delusional-hypocritical the artist is. What do you think?" 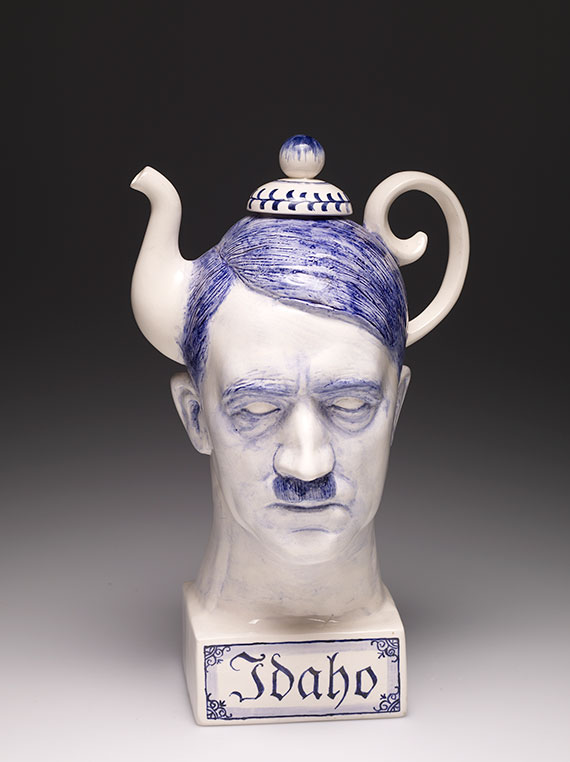 Included in the email was a photo of the Hitler teapot. The Fuhrer's eyes were gouged out, and the teapot handle and spout worked, aesthetically, like devil horns. It was a disturbing piece of work, not something I personally would ever want in my home. But the scandal about Krafft was never about personal taste, it was about something far more complex: Whether the meaning of Krafft's art had changed since revelations about his personal views were made public.

I had to hear more from Matt Besser, what his father was like, what his father thought of the Hitler teapot while he was alive, and would he really have smashed it if he knew about Krafft's views?

As it turns out, Matt Besser is an actor and a comedian who hosts improv4humans, a highly popular L.A. podcast that's an idiosyncratic mixture of improv comedy, storytelling, and interviews. I went on improv4humans with Graves to discuss the Krafft Hitler teapot that his dad once owned, and then followed up later with Matt with some questions of my own.

(I later heard the podcast which originally ran on March 7. While the interview itself is serious and earnest, Besser and his fellow comics put together a bitingly funny skit to introduce the segment beforehand. Go listen to it for yourself. It makes me wonder what Mel Brooks would have said or done if he owned a work of Krafft's).

As it turned out, Besser was more ambivalent about Krafft's art than anybody I encountered, online or in person, especially when it came to the question of the Hitler teapot that everyone's been talking about. His dad's teapot.

What complicates the story of the Hitler teapot is that Sandy Besser quickly became in the minds of many the "Jewish collector" who was conned by Krafft into buying a potentially racist work of art. We in the media had reduced him to an anecdote to help build the case against Krafft. But Sanford "Sandy" Michael Besser was once a living, breathing person with real opinions about art. And he was more than just a weekend dabbler when it came to collecting. According to his obituary in the Santa Fe New Mexican:

He was collecting art in earnest by the mid-1960s and was instrumental in the growth of the Arkansas Arts Center. He also was responsible for overseeing the building of a corporate art collection for Stephens Inc. The Bessers' eclectic collections ranged across 20th century drawings, tribal arts from Indonesia and Africa, contemporary Hispanic carvings and straw applique from New Mexico, figurate ceramics, and perhaps most popular of all, the crazy teapots. He was recognized as one of the top 100 collectors in the country by Art & Antiques magazine in 2002 and is credited with helping emerging artists gain recognition in the competitive world of contemporary art... Sandy, also known as "Scrappy Besser," was not afraid of confrontation. In the art world his opinions were strong.

(The obituary goes on to note Besser's love of word-play and "wickedly dry sense of humor," which may explain how his son became a comedian.)

Matt Besser was a little flummoxed by the attention the teapot received because, for his dad, the Hitler teapot was just one teapot in a very large collection of teapots that lined a hallway in the family home. Some of the teapots were kitschy, like the Brooke Shields teapot he owned, but many of them were simply finely designed examples of craft, with no special aim toward silliness or meaning with a capital "M."

I asked Matt Besser how the Hitler teapot was treated by his father. Was it given a special place in the home? Was it seen as different or perhaps educational because it portrayed Hitler?

Ever the comic, Matt quickly deadpanned that the teapot may have been the most important thing of his entire childhood: "When we entered the house we would have to kiss the lips of Hitler."

But then he became serious. No, the Hitler teapot was just one teapot in an enormous teapot collection. But he admitted that, even before the Krafft scandal broke, some people in the Besser family hated it. "My step-mother used to come into her house and she would avert her eyes from looking around. She didn't want to see it. I think her reaction was, 'Oh, I don't want to look at art that isn't pretty.'"

But, again, this isn't about taste, it's about meaning. I asked Matt, now that the Krafft scandal has gone viral, what do you think of it? I asked. Is the irony gone? Is it tainted with anti-Semitism and hate?

Matt Besser gave a long pause before answering. "At first I thought, hell, yeah, I would have smashed it, but then I changed my mind. I would not smash any art, and I don't think my dad would either."

A couple things bothered Matt Besser. First, though it was understandable that people had turned against Krafft, that didn't invalidate all the art Krafft ever created. Moreover, a lot of people -- including me, apparently -- were projecting unfairly what his father would have done with the Hitler teapot had his father learned of Krafft's twisted ideologies.

"What about Krafft's [ceramic bust of insane murderer Charles] Manson?" Besser asked. "Why aren't we upset about that? Or, well, what about the devil? Can't the devil be in your art? That's more than Hitler. That's Satan himself."

Moreover, Matt Besser refuses to believe that the meaning of the teapot -- this teapot -- has changed, regardless of what Krafft is now saying about the Holocaust.

"I think my dad owned the most clearly satirical [Hitler teapot]. And some of those other [teapots] DO look like they praise Hitler," Matt said. "This teapot makes Hitler look evil. Because he has no eyes."

"But would he have smashed it?" Matt said. The question keeps coming up for Matt, even though I'm no longer asking it. "No, I don't think so. He would definitely not sell it, unless he gave the profits to a Holocaust museum or something. More likely he would keep it and it would be a great conversation piece. To me, talking about Holocaust denial, and talking about how absurd it is, is a good conversation. This is the second time you and I are talking about it, for example."

I was more pleased with my conversations with Matt Besser than anything else that has come out of the Krafft scandal. Besser's stories about his father, his reverence and defense for the idea of art, as well as his upside-down, tongue-in-cheek treatment of the issue on his podcast, has been a fine reminder that art's slippery meanings can never be corralled or contained, that it is undergoing constant change. Multiple, even contradictory meanings in a single work of art are always possible, depending on time, place, the viewer, and many other things.

Most of all, artists, as godlike as they are during the process of creation, are never in complete control once their creation is complete. That's the kind of elusive reality that not even the Nazis could stop.