Charles Murray's Coming Apart is a frustrating book, and not because it fails to resonate but because he identifies a real problem, then fails to convincingly document or explain it. Part of this is the limiting and confusing way he uses data to craft his story, and part is his unwillingness to look beyond individualistic explanations.

First, let me say that despite these foundational critiques, I hear real passion and concern in Murray's voice, a concern that many readers will share, as I did. Whatever you think of his work, and I've been a longtime critic, Murray is a man who has spent a long career paying close attention to society. And I found this book to be a lot better than some of his earlier work. The data problems in Coming Apart--problems that have the potential to mislead readers--are not as bad as the ones in Bell Curve, where Murray was hammered by social scientists for his misuse of IQ as a predictor of various outcomes, along with specious (and incendiary) arguments about race and genetics (Wikipedia has an excellent section on these criticisms).

What's so frustrating here is the difficulty of figuring out what Murray is really talking about. Many will share his angst about the growing gaps in our economy--the growing economic (and for Murray, cultural and behavioral) distance between income classes. But that's not news. The rest of what he's getting at here is surprisingly hard to tease out.

For example, from his evidence, it's hard to judge the magnitude of the problem he details throughout these 300 pages. He clearly believes it's large, but the groupings he chooses are so idiosyncratic, and leave out so much of the population-including the middle class!-that I found it impossible to judge.

In fact, I believe he's focusing on a real but shrinking problem, and ignoring a much larger--and growing--one.

Here's what I mean. The heart of the book focuses on whites, 30-49. In order to be able to compare the fortunes of a working class group with an upper-middle class group, he divides a subset of the population into two groups, based on a set of occupations and education. The working class group works in "blue collar, service, or low-level white collar occupation[s]" and has no more than a high school degree. The members of the upper-middle group all have at least a BA and are "managers, physicians, attorneys, engineers, architects, scientists, college faculty members, or in content-production jobs in the media."

He argues that these roughly correspond to the bottom 30 and top 20 percent of the population arrayed along these lines (occupation and education). But first, that's 50% of the "prime-age" white population, and second, while it's the lower end group he's mostly worried about, it's actually only a subset of them that have the characteristics Murray bemoans.

How large is that group? I can't tell, but I'm quite certain it's small and possibly getting smaller. That doesn't mean they don't deserve our concern and help. But there's something wrong with the diagnostic methods in Coming Apart that leads Murray's analysis astray such that he misses the larger economic dynamics behind the gaps that have evolved over the past thirty years.

I challenge anyone reading the book to sort this out--following who he's really talking about here, and who he's leaving out, reminded me of budget baseline debates. And it led me to mistrust his findings.

For example, he argues that the men in his working class group have been spending a lot less time in the job market, and in fact there is clearly a very long term secular trend toward lower employment rates among prime age men. But I thought that most grown guys with at a high-school degree (and no more) are still quite connected to the job market. So, courtesy of my colleague Arloc Sherman, I plotted the annual hours worked of men, age 30-49, with a high-school education. 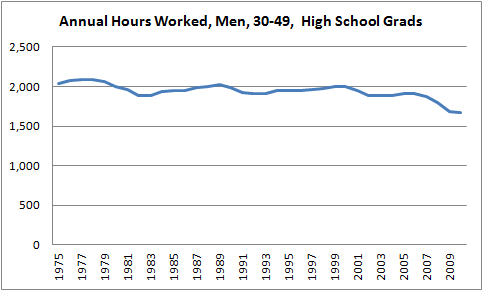 As you see, they pretty much work full-time, full-year (2,000 hours per year) since the mid-1970s, though like everyone else, their labor supply got whacked by the Great Recession.

I'm not saying this one simple chart disproves his theory of a disconnected class of people experiencing a variety of social ills--there are unquestionably such people out there--but I don't think you learn about them from Coming Apart.

Even more importantly, you don't learn why. There is no serious discussion in Coming Apart about factors outside of the individuals' scope of influence responsible for the problems we face. As you'd expect from Murray, there's considerable discussion of personal failings, framed in this discussion of the loss of industriousness, religiosity, marriage, and honesty.

Like David Brooks--quoted liberally [sic!]--Murray is quite a scold on these issues, but excepting marriage, the analysis gets stuck in the armchair. Unless you're predisposed, I doubt you'll be convinced by, e.g., a couple of graphs showing diminished attendance at worship services--a common trend across the population, btw--is an important determinant of the gaps Murray worries about (I singled out marriage above because there's much more solid evidence on disadvantages to children who grow up with one parent).

And even if there's something to his cultural, individualistic explanations as to why we're coming apart (though that's hard to see in the graph above), surely the transformative trends that economists have been writing about for decades deserve mention. Where's globalization and import penetration by low-wage countries, and the loss of manufacturing jobs?

There's a sentence about the loss of "high-paying unionized jobs" but Murray immediately dismisses those developments. To him, they:

"...don't explain why [working-class men] in the 2000s worked fewer hours, found it harder to get jobs than other Americans did, and more often dropped out of the labor market than they had in the 1960s. On the contrary: Insofar as men need to work to survive--an important proviso--falling hourly income does not discourage work." [his italics]

Aha--quite revealing, that, to an economist. Murray only envisions sliding down a demand curve, he does not entertain an inward contraction of demand. But it's the latter that clearly confronted many men as production work dried up from the 1980s on. Sliding down a demand curve implies more work at lower wages, and Murray wants to know why guys aren't taking the jobs. A demand curve that shifts inward, however, means both fewer jobs and lower pay. And there's considerable research that finds exactly these impacts in certain parts of country (here's a great example).

This is part of what I mean by Murray missing the larger, growing problem. His focus on subgroups within subgroups (basically the share of persons that white, 30-49, high-school educated or less, at work in particular occupations, single moms or underemployed) pulls him away from the economic stresses facing a broad array of middle class and low-income families.

These are the families stuck in the cycle I describe here, where inequality feeds back negatively into first, diminished opportunity and mobility, and second, into concentrated political power such that policy becomes uniquely unresponsive to their needs. Slide six (shown below) alone poses a huge challenge to Murray's story. Here you have working-age, middle income families doing extremely well in the full employment economy of the 1990s, when their incomes grew at something like the rate of overall productivity growth. Yet, in the 2000s, they were slammed as what growth did occur went right around them on its way to the top of the scale.

It's inconceivable that their diminished industriousness or religiosity is at fault here, anymore than such individual factors are at play at the end of that figure, when the Great Recession made an already unforthcoming economy for middle and low-income families a lot worse (see these same dynamics at work in poverty rates in slide five--large decline in the 1990s followed by an increase in the 2000s expansion and, of course, the recession).

Charles Murray is right: in important ways we're coming apart and that's a serious danger demanding the attention of social scientists, policy makers, and persons of all income classes. The problem with his book is that if you've been paying any attention, you knew that already. What's missing in Coming Apart are new insights about it.