Dr. Charles Negy, an associate professor of psychology at the University of Central Florida, had to email an extra, elementary lesson to his students -- one so basic and of such societal value that it was posted on Reddit.

Striking a tone somewhere between ivory tower and a mother's lecture, Negy challenged his students to step outside the context of their own cultures for a frank discussion on religious bigotry, a talk apparently interrupted by several students expressing bigoted views, in Negy's opinion.

"We're adults. We're at a university," he concludes. Read the letter below to how he arrived at this point.

Hello, Cross-Cultural students, I am writing to express my views on how some of you have conducted yourself in this university course you are taking with me. It is not uncommon for some-to-many American students, who typically, are first-generation college students, to not fully understand, and maybe not even appreciate the purpose of a university. Some students erroneously believe a university is just an extension of high school, where students are spoon-fed “soft” topics and dilemmas to confront, regurgitate the “right” answers on exams (right answers as deemed by the instructor or a textbook), and then move on to the next course.

Not only is this not the purpose of a university (although it may feel like it is in some of your other courses), it clearly is not the purpose of my upper-division course on Cross-Cultural Psychology. The purpose of a university, and my course in particular, is to struggle intellectually with some of life's most difficult topics that may not have one right answer, and try to come to some conclusion about what may be “the better answer” (It typically is not the case that all views are equally valid; some views are more defensible than others). Another purpose of a university, and my course in particular, is to engage in open discussion in order to critically examine beliefs, behaviors, and customs. Finally, another purpose of a university education is to help students who typically are not accustomed to thinking independently or applying a critical analysis to views or beliefs, to start learning how to do so. We are not in class to learn “facts” and simply regurgitate the facts in a mindless way to items on a test. Critical thinking is a skill that develops over time. Independent thinking does not occur overnight. Critical thinkers are open to having their cherished beliefs challenged, and must learn how to “defend” their views based on evidence or logic, rather than simply “pounding their chest” and merely proclaiming that their views are “valid.” One characteristic of the critical, independent thinker is being able to recognize fantasy versus reality; to recognize the difference between personal beliefs which are nothing more than personal beliefs, versus views that are grounded in evidence, or which have no evidence.

Last class meeting and for 15 minutes today, we addressed “religious bigotry.” Several points are worth contemplating:
Religion and culture go “hand in hand.” For some cultures, they are so intertwined that it is difficult to know with certainty if a specific belief or custom is “cultural” or “religious” in origin. The student in class tonight who proclaimed that my class was supposed to be about different cultures (and not religion) lacks an understanding about what constitutes “culture.” (of course, I think her real agenda was to stop my comments about religion).

Students in my class who openly proclaimed that Christianity is the most valid religion, as some of you did last class, portrayed precisely what religious bigotry is. Bigots—racial bigot or religious bigots—never question their prejudices and bigotry. They are convinced their beliefs are correct. For the Christians in my class who argued the validity of Christianity last week, I suppose I should thank you for demonstrating to the rest of the class what religious arrogance and bigotry looks like. It seems to have not even occurred to you (I'm directing this comment to those students who manifested such bigotry), as I tried to point out in class tonight, how such bigotry is perceived and experienced by the Muslims, the Hindus, the Buddhists, the non-believers, and so on, in class, to have to sit and endure the tyranny of the masses (the dominant group, that is, which in this case, are Christians).

The male student who stood up in class and directed the rest of the class to “not participate” by not responding to my challenge, represented the worst of education. For starters, the idea that a person—student or instructor—would instruct other students on how to behave, is pretty arrogant and grossly disrespects the rights of other students who can and want to think for themselves and decide for themselves whether they want to engage in the exchange of ideas or not. Moreover, this “let's just put our fingers in our ears so we will not hear what we disagree with” is appallingly childish and exemplifies “anti-intellectualism.” The purpose of a university is to engage in dialogue, debate, and exchange ideas in order to try and come to some meaningful conclusion about an issue at hand. Not to shut ourselves off from ideas we find threatening.

Universities hold a special place in society where scholarly-minded folks can come together and discuss controversial, polemic, and often uncomfortable topics. Universities, including UCF, have special policies in place to protect our (both professors’ and students’) freedom to express ourselves. Neither students nor professors have a right to censor speech that makes us uncomfortable. We're adults. We're at a university. There is no topic that is “off-limits” for us to address in class, if even only remotely related to the course topic. I hope you will digest this message, and just as important, will take it to heart as it may apply to you. 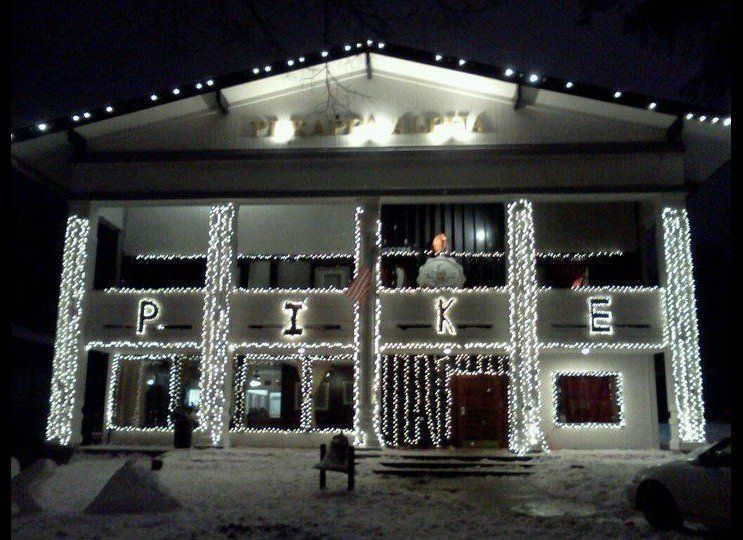 1 / 15
#15 Pi Kappa Alpha
Gamma Xi house decorated for the 2011 holiday season at Washington State University. According to its website, the fraternity started in Room 47 West Range at the University of Virginia in 1868.