Charles Payne is Barack Obama's great-uncle. He's the brother of Obama's grandmother "Toot," the woman who raised Obama and died one day before he was elected. During the campaign Obama misspoke while talking about Payne's war record. He claimed Payne had helped liberate Auschwitz when in fact he had helped to liberate Ohrdruf, a sub-camp of Buchenwald. The Obama team quickly corrected the flub, but not in time to stem RNC mailings about it.

Below are some more photos of Payne at the D-Day celebrations sitting on the same row as British First Lady Sarah Brown, French First Lady Carla Bruni-Sarkozy and Michelle Obama, his great-niece in-law. Below the photos is an excerpt from a recent interview that Payne gave to the German magazine Spiegel. 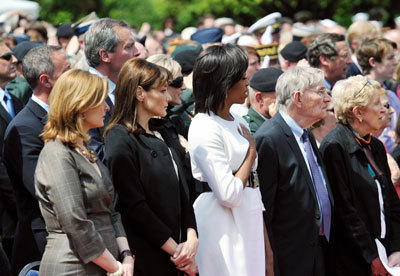 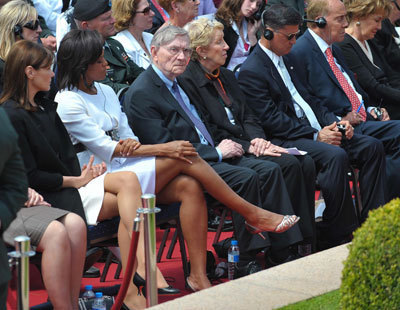 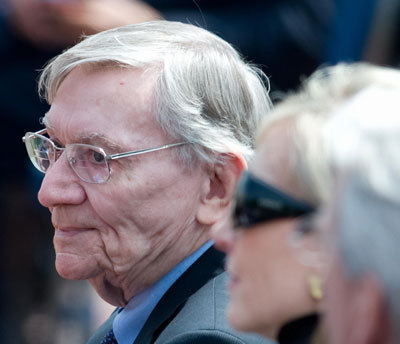 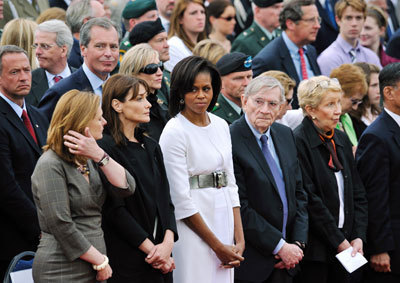 SPIEGEL: You're a Democrat?

Payne: I was a Democrat from way, way before Barack was born.

SPIEGEL: Are you proud of your great-nephew?

Payne: Yes, naturally. I was at the Democratic Convention in Denver, where I was introduced by Senator John Kerry, and then also at his inauguration. He encompasses so much: self assuredness, competency, leadership and the great good luck that he had. Finally he had the good luck, if you will, of the financial crisis that got him elected, but now he also has to deal with it.

SPIEGEL: How would you describe your relationship with Barack?

Payne: Our relationship is warm and friendly, but I'm not part of his inner circle. We always have an interesting chat when we get in the same room together. He doesn't call me up and ask what I have to say about world policy or anything. And I never offer my opinions on any of this.

SPIEGEL: And will you join your great-nephew on his trip now to Germany?

Payne: If he invites me on Air Force One, I'll be there.