Dr. Charles Townes, who shared the 1964 Nobel Prize in Physics for the invention of the laser, died in Berkeley, Calif., on Tuesday. He was 99.

Townes' death was announced by the University of California, Berkeley, where he was a professor emeritus of physics.

“Charlie Townes had an enormous impact on physics and society in general,” Dr. Steven Boggs, professor and chair of the physics department at the university, said in a written statement. “Our department and all of UC Berkeley benefited from his wisdom and vision for nearly half a century. His overwhelming dedication to science and personal commitment to remaining active in research was inspirational to all of us." 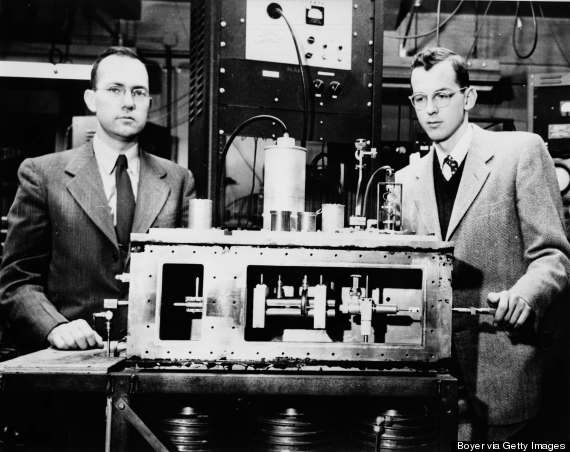 Charles H. Townes (left) and James P. Gordon shown with the second of two microwave amplifiers, or masers, that they built in 1955 with H. J. Zeiger (not shown). Townes shared the 1964 Nobel Prize in Physics for invention of the maser and the description of the laser, which was first built in 1960.

In 1958, Townes and physicist Dr. A.L. Schawlow, his brother-in-law, came up with the idea of using mirrors at the ends of a gas tube to amplify light, which led to the invention of the laser.

Townes was also a pioneer in the field of infrared astronomy. Along with his colleagues, he is credited for the discovery of water vapor near the center of the Milky Way galaxy.

Charles Townes died 27 Jan. 99 yrs old. Awarded the #NobelPrize for the work that led to the construction of lasers. pic.twitter.com/dSjAbJ3Kyz

In addition to the Nobel, Townes was awarded the 2005 Templeton Prize as a leading advocate for the convergence of science and religion. He joined Mother Teresa as the only other individual to win both the Nobel and the Templeton, the Los Angeles Times reported.