In the aftermath of last week's shooting at a historically black church in Charleston, South Carolina, Americans say it's the right time to discuss both gun control and racism, a new HuffPost/YouGov poll finds.

The nation largely recognizes the persistence of racial issues: 83 percent say racism still poses a problem, up 7 points since last year. Nearly two-thirds of Americans, including both 61 percent of whites and 82 percent of blacks, and a majority in both political parties, say there's a need for a conversation about racism in American life. 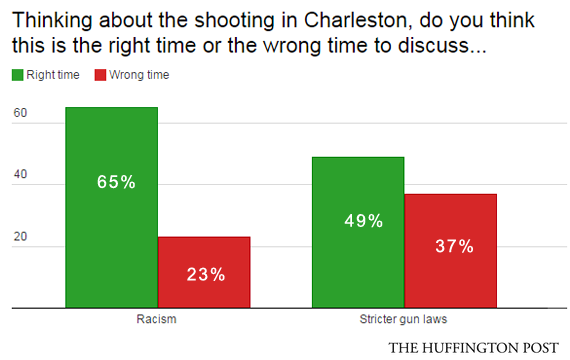 Gun control remains more divisive, but Americans still say by a 12-point margin, 49 percent to 37 percent, that now is the right time to discuss stricter gun laws. That's up slightly from the wake of the 2013 Navy Yard shooting in Washington, D.C., when 45 percent said a national discussion about gun laws should be held in the days after mass shooting incidents.

The most recent tragedy doesn't, however, appear to have made much of an impact on Americans' appetite for stricter gun control, which has generally trended downward over the past few decades. But support for some specific restrictions, including universal background checks, remains high.

By a 10-point margin, 44 percent to 34 percent, Americans say stricter gun control laws and enforcement would do more to prevent another mass shooting than allowing more private citizens to carry guns for protections would. These numbers are relatively unchanged from surveys conducted in 2013 and just after the 2012 shooting in Newtown, Connecticut.

Opinions on guns, which have grown increasingly polarized, are split starkly along partisan lines. Democrats are 53 points more likely than Republicans to say it's the right time to talk about gun control. Seventy-one percent of Democrats, and just 21 percent of Republicans, say stricter guns laws would be more effective than allowing more private citizens to carry guns.

The HuffPost/YouGov poll consisted of 1,000 completed interviews conducted June 19-22 among U.S. adults using a sample selected from YouGov's opt-in online panel to match the demographics and other characteristics of the adult U.S. population.