Any baseball fan who's rooted for the Detroit Tigers at Comerica Park has heard that operatic yell from the stands: "HOOOOOOOOOT DOGS!"

Hot dog vendor Charlie Marcuse's booming voice made him a Detroit icon -- and when his warblings were temporarily banned by the Detroit Tigers in 2004, he became a national celebrity.

But the singing hot dog man has finally been silenced. Marcuse announced on Twitter that he had been permanently fired by Detroit Sportservice, which manages vendor operations for Comerica Park. The stadium and team are owned by Little Caesars Pizza founder Mike Ilitch.

After 15 years the @Tigers finally got what they've aways wanted: I was fired by @delawarenorth #Sportservice this morning. #LongLiveMustard

Some have suggested that Marcuse was fired for the love of mustard. The vendor, who has his own mustard condiment line, was a fierce critic of ketchup -- and ballpark frank fans who requested it. The Detroit News reported that several fans filed complaints about Marcuse's "combative attitude" when he was asked to top a dog with ketchup.

Amen! RT“@chriscahill1992: @SinginHotDogMan If you put ketchup on a hot dog, then i think you deserve an ejection from that baseball game.”

"It comes from the heritage that vendors until 15-16 years ago -- they didn't even carry ketchup. It wasn't even available to them," Marcuse earlier told The Huffington Post. "Baseball is a sport of traditions. Everything has a very time-honored way it's done. You stand for the national anthem. You stretch at the seventh inning and sing "Take Me Out To The Ball Game."

Indeed, the vendor was known to occasionally holler at fans, "There's no ketchup in baseball!"

“While it would be inappropriate to comment on specific confidential personnel action, in general Detroit Sportservice takes personnel action only after a complete and thorough review of an employee’s performance, all in accordance with its personnel policies and applicable collective bargaining agreements," the statement read. "Sportservice prides itself on providing the highest level of guest service to enhance the guest experience at Comerica Park. We encourage our vendors to interact and provide an excellent experience for the fans and are proud of the great vendors who are serving fans throughout Comerica Park.”

Marcuse told the Detroit News that "general employee conduct" was the sole reason he was given for his dismissal.

“I’ve vended the same way for the past 15 years, so there’s nothing new to any of this," he said.

Marcuse isn't the only frankfurter fan known for ketchup indignation. In Chicago, topping a dog with ketchup is generally regarded as a social faux pas (read HuffPost Blogger Meathead's comprehensive look at the condiment controversy). The late Pulitzer-winning columnist Mike Royko, the National Hot Dog & Sausage Council, and even President Obama have all made statements supporting the practice of consuming mustard-only dogs.

Dirty Harry may have said it best:

Take the poll and let us know where you stand on the great hot dog debate. 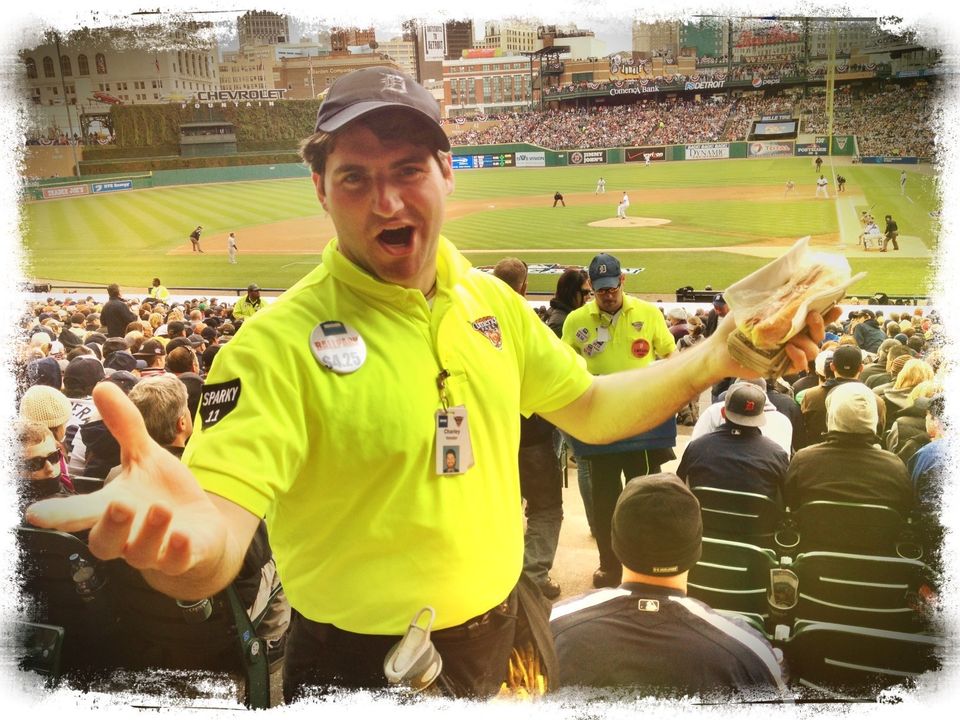 1 / 17
What's a typical day like for a hot dog vendor at Comerica Park?
I change into my ballpark uniform. Go to the commissary. There's sort of a check-in process. Order a load of dogs. They fill them up. Take out a bag. Run out. Sell up a storm. Come back and get more. Repeat.
Courtesy Charley Marcuse