This past weekend, 23-year-old rising pop star Charli XCX played a thrilling, energetic set at Chicago's Lollapalooza -- but not everyone was loving it.

Many music critics writing about the set from Ms. XCX -- born Charlotte Aitchison -- took issue with Aitchison's songwriting and performance style, including a Chicago Tribune writer who called her music "witless."

Her tongue-in-cheek "playing" of a giant inflatable guitar and telling the crowd they could join her chant of "pussy pussy / power power" "even if you have a dick" clearly struck a particularly sour note in the eyes of some critics. (Despite the fact that, the following day, media outlets universally celebrated a set practically identical in composition at the Osheaga festival in Montreal.)

Perhaps the strangest review came from the RedEye, where one of the free paper's critics wrote the following:

"She was not the most ladylike of performers either, constantly gyrating her hips and even exclaiming, "My fly keeps coming undone." Classy..."

While it's completely fair for a music critic to express a negative opinion about an artist's performance at a festival -- it's pretty much their job, after all -- such criticism verges into murkier waters when it enforces gender stereotypes and expectations, particularly, in this case, the suggestion that female artists should be "classy" and "ladylike."

Such criticisms also downplay the Brit artist's impressive credentials. Though Charli XCX is relatively new to the mainstream pop world but has already had a hand in some of the biggest hits of the past two years, co-writing and contributing vocals on both Icona Pop's ubiquitous "I Love It" and 2014's song of the summer "Fancy," plus her own "Boom Clap."

And she's also an impressive live performer. Accompanied by her all-female backing band on Saturday, Aitchison played an energetic and thrilling show in front of a relatively large crowd braving direct sunlight on a hot, humid afternoon. Her set ranged from the aforementioned mega-hits to less-recognized tracks from "Sucker," her latest release, and even a deep cut, "Grins," off her full-length debut, 2013's "True Romance." 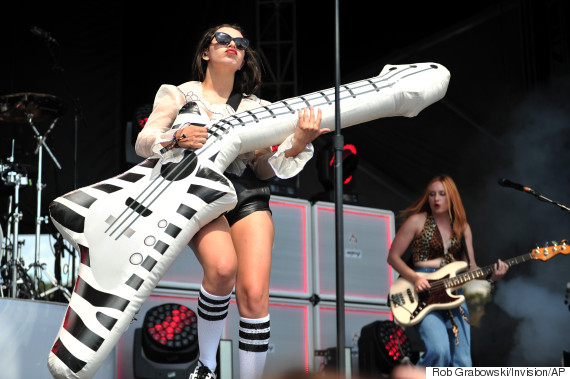 The fact that Aitchison only pulled one track from her debut album during a nearly hour-long festival set speaks to how deep her well of practically flawless pop music actually is. And the crowd appeared to be loving it despite issues with the volume of Aitchison's vocals, which several other acts at the same stage over the weekend were also impacted by.

Of course, sexism continues to be a major issue in the music industry. Female artists are dramatically underrepresented in the lineups of major music festivals in the U.S. and, as Icelandic singer-songwriter Björk described earlier this year, music journalists have a knack for downplaying the role that female artists play within their own music. And in 2013, Canadian singer Grimes posted a lengthy essay to Tumblr discussing the litany of ways she has encountered sexism in her career, echoing the sentiments of many other female artists who have expressed similar concerns.

Female artists, particularly the purveyors of pop music, are continually defined within parameters that are practically impossible to satisfy: Not too sexy but not too prudish, not too aggressive but not too meek, not too serious or smart but not too fun or "dumb." It sets them up to "fail" and encourages them to direct their frustration toward other female artists or stop making music altogether.

So, while Aitchison has probably grown accustomed to such criticisms -- she's been singing professionally since she was a teen, after all -- it doesn't mean that they should continue to be OKed by copyeditors and published for all to see.

After all, the biggest victims of such sexist and stifling critiques being tolerated are the young women reading them who might be discouraged to pursue their own musical ambitions due to the realization that their music will never be taken as seriously as a man's, as well as all of us who could be denied hearing whatever musical creations those young women might one day dream up.

And that makes us all suckers.