Got a couple of pencils? Then you, too, can try to summon a Mexican demon, freak out your friends and post your own #CharlieCharlieChallenge on social media.

But if you're the superstitious type, or just easily spooked, the Charlie Charlie Challenge might not be for you.

The challenge is a cross between "Bloody Mary" and Ouija, and as the name suggests, involves summoning an entity named Charlie.

Here's how it works: Take a piece of paper and draw a single horizontal line and a single vertical line that meet in the center. Put a "YES" in two opposing sections and a "NO" in the other two. Place two pencils across the middle of the drawing in a plus-sign formation, with one balanced atop the other so that it can spin.

Ask aloud, "Charlie, Charlie, are you there?" or "Charlie, Charlie, can we play?" and the top pencil will likely move at some point because of how it's balanced. However, some players believe it's a sign that "Charlie" is in the room and ready to take questions.

Charlier's "answers" have had people screaming:

And in some cases, even running right out of the room:

While some folks may be genuinely scared, others are having more fun mocking the game:

Who knows? Maybe Charlie can hook you up with a member of One Direction:

Like any good urban legend, this one can supposedly go awry and lead to hauntings by Charlie, especially if you stop playing without permission. To end the game, you're supposed to ask "Charlie, Charlie, can we stop?" If you don't get a firm "no," keep playing.

The game, which has been trending on Twitter overnight, appears to be a simplified version of a traditional Mexican game variously called either "Six Pencils" or "The Pencil Game." Pencils.com offers an explanation here.

PHOTO GALLERY
Scary Stories To Tell In The Dark 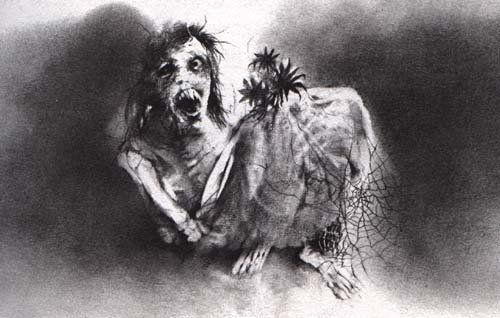