PARIS, Sept 21 (Reuters) - France confirmed on Friday it would allow no street protests against cartoons denigrating Islam's Prophet Mohammad that were published by a French magazine this week.

Interior Minister Manuel Valls said prefects throughout the country had orders to prohibit any protest over the issue and to crack down if the ban was challenged.

"There will be strictly no exceptions. Demonstrations will be banned and broken up," he told a news conference in the southern port city of Marseille.

The main body representing Muslims in France appealed for calm as the satirical weekly Charlie Hebdo put a new print run of the cartoons featuring a naked Mohammad on the news stands.

The drawings have stoked a furore over an anti-Islam film made in California that has provoked sometimes violent protests in several Muslim countries, including attacks on U.S. and other Western embassies, the killing of the U.S. envoy to Libya and a suicide bombing in Afghanistan.

French embassies, schools and cultural centres in some 20 Muslim countries were closed on Friday, the Muslim day of prayer, in a precaution ordered by the French government.

Police were on alert in the French capital after protests planned by some Muslim groups were banned.

Mohammed Moussaoui, leader of the French Muslim Council (CFCM), described both the film and the cartoons as "acts of aggression", but urged French Muslims not to take to the streets for unauthorised protests.

"I repeat the CFCM's call not to protest. Any protest could be hijacked and counterproductive," he told French radio station RFI.

Charlie Hebdo, an anti-establishment weekly whose Paris offices are under police protection, defied critics to rush out another run of the publication that sold out in minutes on Wednesday.

It says the cartoons are designed simply to poke fun at the uproar over the film and on Friday hit back at critics accusing it of deliberately stirring controversy to sell newspapers.

"If Charlie Hebdo wanted to make a quick buck, it would not produce Charlie Hebdo," it said on its Twitter feed.

The publication, whose origins date back to the 1960s protest movement, has a print run of around 70,000 but its Mohammad cartoons have made front-page news in a country which has both the largest Muslim and Jewish populations in Europe.

So far there has been little street reaction in France but authorities are concerned they could compound the worldwide fury over the privately funded, California-made video depicting Prophet Mohammad as a lecher. Police occupied strategic positions in the capital but kept a relatively low profile.

Marine Le Pen, leader of the far-right National Front, called in Le Monde for a ban on the Muslim veil and the Jewish kippa headgear.

When Valls, the Interior Minister, confirmed the ban on protests over the cartoons, he also said: "Neither will I allow street prayers, which have no place in this republic. And naturally the law will apply to anyone who wears the full face veil."

President Francois Hollande's government has sought to balance a cherished tradition of freedom of expression with security concerns, denouncing Charlie Hebdo as irresponsible.

"When you are free, in a country like ours, you always have to measure the impact of your words," French European Affairs Minister Bernard Cazeneuve said.

French media showed footage of an embassy protected by soldiers and barbed wire in former French colony Tunisia, where the Islamist-led government has also banned protests over the cartoons. About 100 Iranians protested outside the French embassy in Tehran on Thursday.

In Germany, which has a large Turkish community, the satirical magazine "Titanic" circulated a preview of its October edition with a cover linked to the Mohammad film saga.

The photomontage shows the wife of a former German president in the clutches of a bearded, dagger-wielding man in a turban - a satire on a book by former first lady Bettina Wulff about her husband's resignation over the couple's murky finances.

"The West in Uproar: Bettina Wulff Making a Mohammed Film," runs the headline. 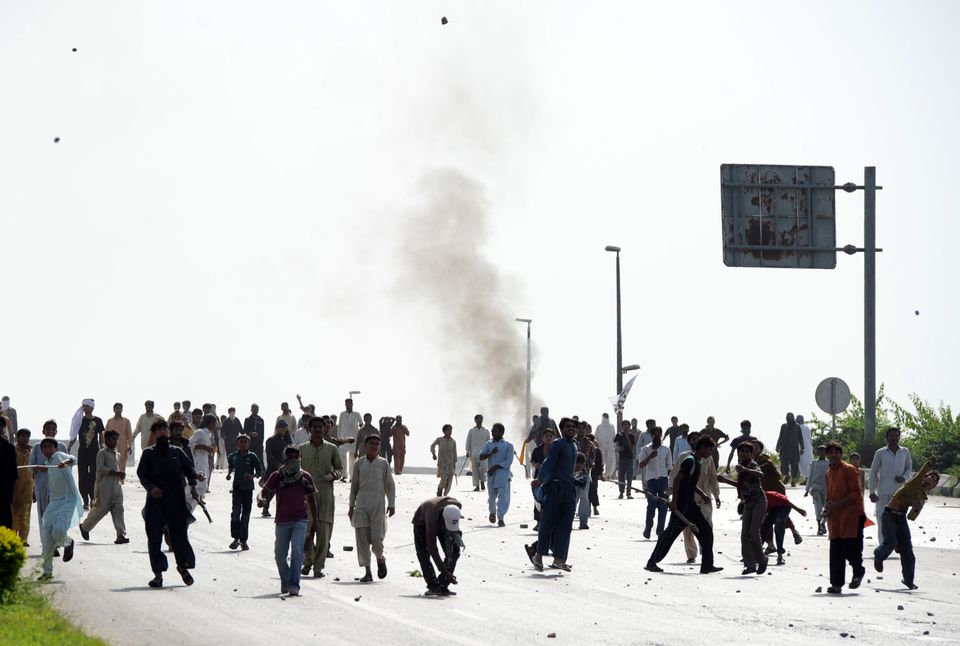