To all those media outlets who have convinced themselves that they don't need to publish the Charlie Hebdo cartoons of Mohammed in reporting the recent events in Paris: you are profoundly wrong.

Your raison d'etre is to present news. The Hebdo cartoons are a natural part of the story of the murders in Paris. To assert that a description of an image is anything like the image, itself, is a rationalization of cowardice. The only reason to "describe images" without publishing them is fear of the consequences of publishing. 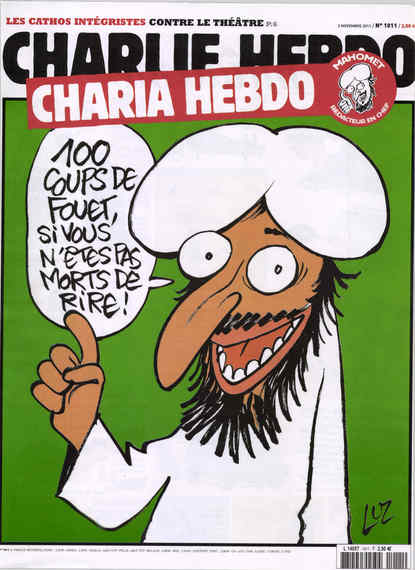 The official reason offered by many Western media outlets for not showing us the images that have at least in part provided the excuse for three fanatics to murder is "so as not to cause offense."

First, you can't cause offense. Offense is always taken, never given. Western society depends on that -- on responsibility for one's emotions, and if not for one's emotions, then for what one does with one's emotions. Many of us get offended on a weekly basis. The "right" not to be offended is not a right at all. Rather it can only ever be, by definition, a claim made to limit the rights of others.

Some people and organizations do indeed get-off on causing offense for attention or for its own sake. I have little time for such behavior. Indeed, all my political work is geared to mutual respect and finding common ground.

But that is not at issue here. Any sane person can see that the presentation of the Charlie Hebdo cartoons of Mohammed in stories about the murders in Paris is a very natural and legitimate part of telling the story of those murders -- a purpose that is entirely and necessarily consistent with the much greater and deeply necessary purpose of the media in a civilized society. 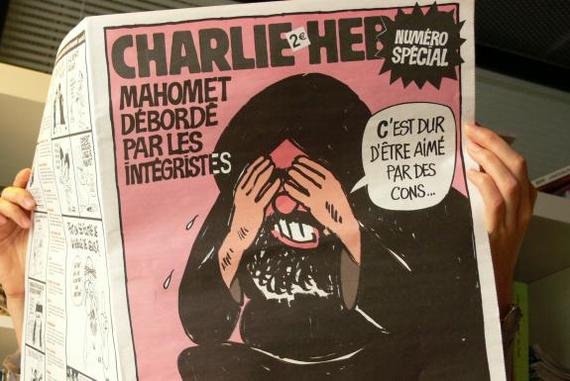 This is all very basic stuff. Murders have been committed because (among other reasons) the murderers dislike the way their victims exercised their freedom of expression. Some media organizations whose existence depends on that freedom, and that have the greatest responsibility to defend it (because they exercise that right every day), are giving it up without a fight. That responsibility to defend it is a responsibility to self-interest, let alone to the free society that allows them to operate, and to the people from whom they gain their revenues.

If these mainstream media outlets have adopted "not causing offense" as a new standard for editorializing, then I hereby inform them that I -- and millions like me -- choose (because it is always a choice) to be deeply offended by much of the mainstream media's credulous reporting of our own government's actions -- especially in foreign policy, military and civil rights matters -- since 9/11.

I don't expect them to be very bothered by that, of course, because it's not the causing of offense that concerns them -- and all editors know as much from a moment's introspection. They're not concerned by my taking offense because I, being a civilized human being whose mind has not been ossified by religious orthodoxy and fundamentalism, am not going to use my offense as an excuse for violence against them.

Everyone who's working at these media outlets realizes that one goal of the attacks in Paris is to render the Western press unfree, or to punish it for exercising its freedom (which is exactly the same thing). Now, by definition, only the media, and those who work in the media, can decide whether to give the attackers what they are demanding -- a veto by one group on everyone else's freedom of expression.

A media executive might protest that his job is not to take political, cultural or religions sides ... that the presentation of information doesn't entail direct engagement in such controversy. And that is correct ... and that is why the editors should do their job without fear or favor, which is to tell the story in full. It's by not publishing those cartoons, therefore, that media outlets are acting politically and morally -- and they are doing it for the wrong side.

When George Bush famously said, "either you are with us or you're with the terrorists", he was profoundly wrong. At that time, the media collectively failed us miserably by promoting the fear-driven propaganda that resulted in the deaths of many American servicemen, many more innocent foreigners, and the take-down by our government of the very rights that the terrorists in Paris would also like to see taken down as they establish their silly caliphate.

Think about that. If you're an editor who's not publishing those cartoons today, you're not just failing to defend press freedom, you're acting against a free press because you're giving up your job to tell the whole story at the very time when the story is about the freedom on which your job depends.

That is not a neutral position.

As Sartre said, "What is not possible is not to choose".

This is not about multiculturalism or cultural sensitivity. It is not about imposing images of a prophet on people who don't want to see them. My deep sensitivity and respect for the values and lives of Muslims around the world, many whose lives have been destroyed by Western policies that I oppose, in no way requires me to engage in a wholesale suppression and denial of my own values -- which include media that tell the truth without knowing distortion by either falsity or omission.

Ironically, perhaps, in the next few days, the media's actions will speak louder than their words. And to turn to another idiom, a picture is worth a thousand of those. Right now, then, one cartoon is worth even more than that -- but, crucially, no cartoon is worth an order of magnitude more.

Much of the American media, in particular, spent many years rather uncritically providing platforms for people who have asserted that defense of our freedom requires killing innocent Muslims abroad -- while legislatively compromising away those very values that we were purportedly defending... without any of the sensitivity to Muslim sensibilities (let alone lives) that they have found over a few images.

The events in Paris have shed light on something that has always been true: that the fight to maintain our liberties can ultimately only be won or lost in the minds of the people whose liberties they are. They are won or lost whenever people choose to preserve those liberties by exercising them even when doing so feels risky, or when, alternatively, people decide not to exercise them because they are less important than avoiding discomfort.

So media, are you with us, the People, and our freedom of speech - which is also yours, or are you with the terrorists? Because if you will not do your job at this time when your freedom even to be the media is attacked - then what the heck are you for?

And please don't come back with the tired trope about protecting your employees. If they don't like the fact that their organization is choosing to do the right thing, rather than fall into gross hypocrisy, then they can exercise another beautiful freedom ... the freedom to get a job that suits them better.