PARIS (AP) -- More than 40 world leaders and what government officials say were between 1.2 and 1.6 million people streamed into the heart of Paris on Sunday for a rally of national unity to honor the 17 victims of three days of terror. French officials claimed that the march is the largest demonstration in the nation's history, with the Interior Ministry calling the event "unprecedented" and stating that around 3.7 million people across France took place in rallies.

The aftermath of the attacks remained raw, with video emerging of one of the gunmen killed during police raids pledging allegiance to the Islamic State group and detailing how the attacks were going to unfold. Also, a new shooting was linked to that gunman, Amedy Coulibaly, who was killed Friday along with the brothers behind a massacre at satirical newspaper Charlie Hebdo in nearly simultaneous raids by security forces.

"Today, Paris is the capital of the world," said French President Francois Hollande . "Our entire country will rise up toward something better."

Israel Prime Minister Benjamin Netanyahu and Palestinian President Mahmoud Abbas were among the leaders attending, as were top representatives of Russia and Ukraine.

Rallies were also planned in London, Madrid and New York -- all attacked by al-Qaida-linked extremists -- as well as Cairo, Sydney, Stockholm, Tokyo and elsewhere. 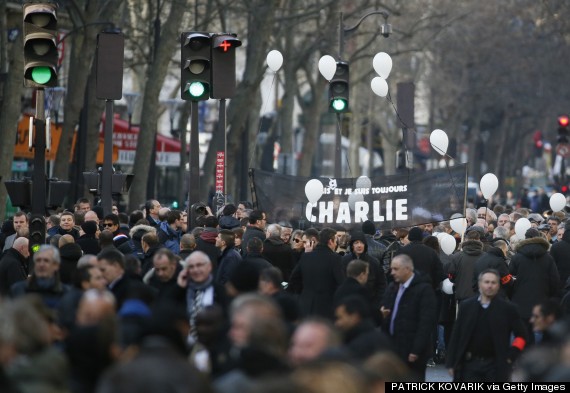 People take part in a Unity rally Marche Republicaine in Paris on January 11, 2015 in tribute to the 17 victims of a three-day killing spree by homegrown Islamists.

"We are all Charlie, we are all police, we are all Jews of France," Prime Minister Manuel Valls declared on Saturday, referring to the victims of the attacks that included employees at Charlie Hebdo, shoppers at a kosher grocery and three police officers.

The three days of terror began Wednesday when brothers Said and Cherif Kouachi stormed the newsroom of Charlie Hebdo, killing 12 people. Al-Qaida's branch in Yemen said it directed the attack by the masked gunmen to avenge the honor of the Prophet Muhammad, a frequent target of the weekly's satire. On Thursday, police said Coulibaly killed a policewoman on the outskirts of Paris and on Friday, the attackers converged. 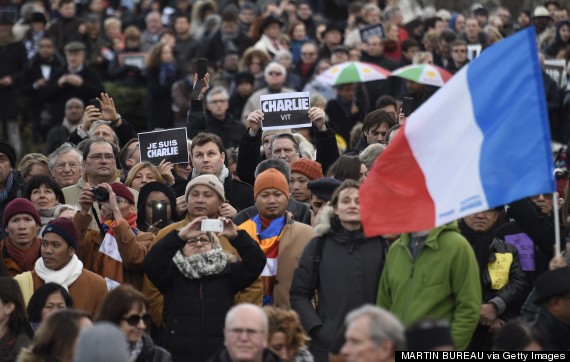 People hold signs and the French flag as they gather at the Place de la Nation during the Unity rally Marche Republicaine on January 11, 2015 in Paris.

While the Kouachi brothers holed up in a printing plant near Charles de Gaulle airport, Coulibaly seized hostages inside a kosher market. It all ended at dusk Friday with near-simultaneous raids at the printing plant and the market that left all three gunmen dead. Four hostages at the market were also killed.

Five people who were held in connection with the attacks were freed late Saturday, leaving no one in custody, according to the Paris prosecutor's office. The widow of the man who attacked the kosher market is still being sought and was last traced near the Turkey-Syrian border.

Early Sunday, police in Germany detained two men suspected of an arson attack against a newspaper that republished the Charlie Hebdo cartoons. No one was injured in that attack. 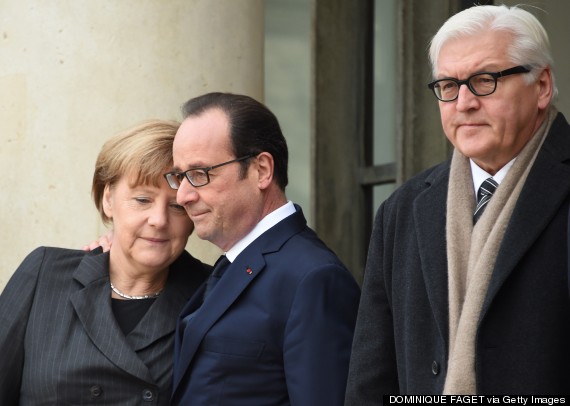 "The terrorists want two things: they want to scare us and they want to divide us. We must do the opposite. We must stand up and we must stay united," French Foreign Minister Laurent Fabius told French TV channel iTele on Sunday.

It was France's deadliest terrorist attack in decades, and the country remains on high alert while investigators determine whether the attackers were part of a larger extremist network. More than 5,500 police and soldiers were being deployed on Sunday across France, about half of them to protect the march. The others were guarding synagogues, mosques, schools and other sites around France.

"I hope that we will again be able to say we are happy to be Jews in France," said Haim Korsia, the chief rabbi in France, who planned to attend the rally.

"I hope that at the end of the day everyone is united. Everyone, Muslims, Jews, Christians, Buddhists," added Zakaria Moumni, who was at Republique early Sunday. "We are humans first of all. And nobody deserves to be murdered like that. Nobody."

At an international conference in India, U.S. Secretary of State John Kerry said the world stood with the people of France "not just in anger and in outrage, but in solidarity and commitment to the cause of confronting extremism and in the cause that extremists fear so much and that has always united our countries: freedom." 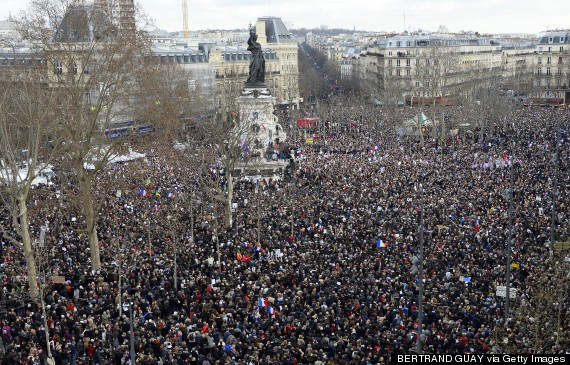 People gather on the Place de la Republique (Republic Square) in Paris before the start of a Unity rally Marche Republicaine on January 11, 2015.

Posthumous video emerged Sunday of Coulibaly, who prosecutors said was newly linked by ballistics tests to a third shooting -- the Wednesday attack on a jogger in a Paris suburb that left the 32-year-old man gravely injured. In the video, Coulibaly speaks fluent French and broken Arabic, pledging allegiance to the Islamic State group and detailing the terror operation he said was about to unfold.

The Kouachi brothers claimed the attacks were planned and financed by al-Qaida in Yemen.

CORRECTION: This post has been updated to clarify that 3.7 million represents the total amount of people across France joining in rallies, not just in Paris. A caption in this post has been changed to reflect that Angela Merkel is Germany's Chancellor, not Vice Chancellor.