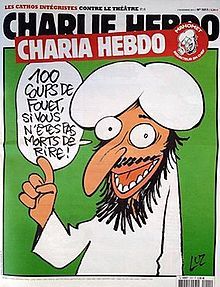 There's a lot to be said for having a sense of humor and very little to be said for not. Dictators and extremists tend to fall into the latter category. In the last few weeks we have seen the international repercussions from the actions of people whose funny bone was removed at birth. The very unfunny Kim Jong Un went ballistic when Seth Rogin decided to bomb the dictator's head. There was a lot of discussion about free speech and the American way -- but no one has died, although some Sony employees may have felt like they wanted to.

But today's massacre at Charlie Hebdo shows how not being able to laugh at oneself and the absurdities of the world can lead to the brutal slaughter of innocent people. If you are convinced that your view of the world is the only correct one, then you won't find it funny to have that view mocked. If you are secure of your own view, then you won't mind having it mocked -- well, not too much.

Satire, when it is at its most savage, doesn't feel subtle. But satire is a subtle tool that requires a double-consciousness. It isn't simply making fun of someone or something. It requires the person who "gets" the satire to at once understand that fun is being made and at the same time to understand that there's nothing really funny behind satire. The double-consciousness also requires that while satire might be mocking the thing you revile; it can as easily reverse itself and mock what you hold dear. Satire has no favorites -- all of us are fair game.

At the heart of satire is irony. And irony isn't for people who can't step back far enough from their positions to gain an ironic stance. Irony is defined as "the expression of one's meaning by using language that normally signifies the opposite, typically for humorous or emphatic effect." Again, irony requires a mind capable of a double-consciousness -- but if you are someone whose mind is fixated on one thing -- having the subtlety to understand the nuance of language will be lost on you. You won't find satire funny if what is only funny to you is someone slipping on a banana peel or being hit over the head with a duck.

The ancients distinguished between Horatian and Juvenalian satire. The former was more light-hearted and aimed to heal. Juvenal, on the other hand, wrote stinging, biting satire made to mock and render grotesque the person or practice being showcased.

Satire now embraces both approaches, and a magazine like Charlie Hebdo came into being in imitation of magazines like MAD magazine and Paul Krasner's The Realist -- aiming toward the tasteless caricature. When I lived in Paris in the early 1970s Charlie had just come back after being shutdown by that master of comedy Charles De Gaulle, who, like Kim Jun Un, didn't like being mocked by the magazine. Everyone of a certain age and politics would eagerly buy the next hebdomadal (yes, that's why it's called Hebdo) publication.

It makes about as much sense to storm and kill journalists at Charlie Hebdo as it does to kill the writers at Saturday Night Live. You can't kill comedy, and you can't kill satire. And if you try, you'll eventually be satirized for doing so. Shooting the class clown or the court jester doesn't fix anything. The problem after all isn't the satirist -- the problem is the kind of person who didn't stop to understand how humor works. If your view of the world can't include humor and satire, then it isn't a view of the world -- it's a view of a very small, dark, sad, angry corner of that world.