Police cornered brothers Cherif and Said Kouachi on Friday inside a printing house in the town of Dammartin-en-Goele near Charles de Gaulle International Airport, where the suspects had been holed up since Friday morning.

A hostage taken by the brothers in Dammartin-en-Goele was released before the siege. An employee at the printing house who was hiding in the building's cafeteria was freed by police after the raid. The Associated Press said the brothers told police negotiators they wanted to die as martyrs.

A government source told Reuters that the Kouachis were killed after stepping out of the building and opening fire. The brothers had a loaded M82 rocket launcher, two Kalashnikov assault rifles and two automatic pistols, according to Paris prosecutor Francois Molins.

Police also raided a kosher supermarket in Paris, where a gunman identified as Amedy Coulibaly opened fire and took several people hostage. Molins said the gunman killed four people when he entered the supermarket. Four more were injured, officials said. An Israeli official said the police raid freed 15 hostages, according to The Associated Press. The gunman himself was killed in the police assault. Coulibaly was found with a Kalashnikov assault rifle and a Skorpion military pistol, according to Molins. 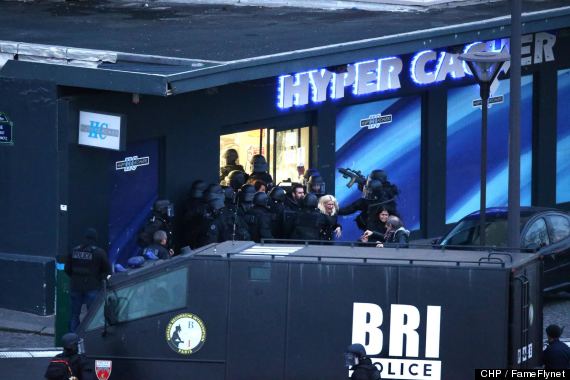 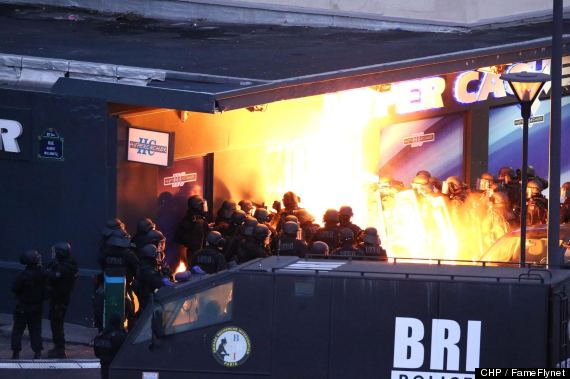 According to The Associated Press, Coulibaly had earlier threatened to hurt the hostages if police raided the building where the Kouachi brothers were holed up.

Police released a photo of Coulibaly and a woman named Hayat Boumedienne, who is believed to be his accomplice. As of early Saturday, French police are still looking for Boumedienne. She had been interviewed by anti-terrorist police in 2010, and told police she had visited the radical Islamist Djamel Beghal, Le Monde reported.

Coulibaly is also believed to be a suspect in yesterday's killing of a policewoman on the southern edge of Paris. Several news outlets reported Friday that Coulibaly had a history of crime and violence.

Police told AP that Coulibaly appeared to know Said Kouachi and Cherif Kouachi. The three men are believed to have been members of the same Paris jihadist cell that sent French fighters to Iraq a decade ago, a police source told Reuters. According to France's L'Obs, Coulibaly spent time with Cherif Kouachi when they were both in prison in Fleury-Mérogis in 2005 and 2006. The wife of Kouachi exchanged 500 phone calls with the girlfriend of Coulibaly, Molins said.

Coulibaly was sentenced in 2010 for his part in an effort to free Islamist militant Smain Ali Belkacem from jail, Reuters reported. The BBC noted that the two Kouachi brothers were also named in connection to the attack, but weren't charged because of a lack of evidence.

French television channel BFMTV published an edited version of two interviews their staff conducted on Friday with men who claimed to be Cherif Kouachi and Amedy Coulibaly.

The man who claimed to be Cherif Kouachi told a journalist at the channel that he was sent by Al Qaeda in Yemen. "We are the defenders of the prophet," he added. The caller who said he was Amedy Coulibaly contacted BFMTV in the afternoon as the hostage crisis in the supermarket was ongoing. He said he belonged to the Islamic State and had coordinated with the Kouachi brothers. 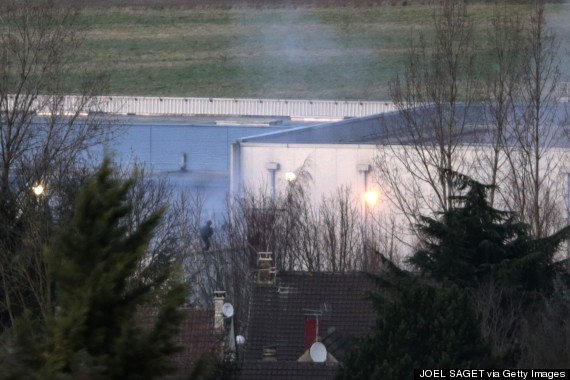 Police officers launch an assault Friday as smoke rises from a building in Dammartin-en-Goele, northeast of Paris, where two brothers suspected of killing 12 people in an Islamist attack on French satirical newspaper Charlie Hebdo held one person hostage as police cornered the gunmen. (JOEL SAGET/AFP/Getty Images)

On Wednesday, two masked and heavily armed gunmen stormed the offices of Charlie Hebdo in Paris while the staff was in an editorial meeting, killing 10 journalists and two policemen. Several others were injured in the attack. Witnesses told police that one of the gunmen shouted, "We have avenged the prophet. We killed Charlie Hebdo."

Mourad turned himself in to authorities at a police station about 145 miles northeast of Paris on Wednesday night, saying he had seen his own name circulating on social media. Friends of Mourad told French media that he was in school at the time of the attack.

Cherif Kouachi, 32, was convicted in 2008 for his involvement in a Paris-based cell that trafficked French Muslims to fight in Iraq, and he served 18 months of a three-year sentence.

U.S. and European sources close to the investigation said on Thursday they believe Said Kouachi had previously traveled to Yemen to train with the al Qaeda affiliate in that country.

The Associated Press reported on Friday that a member of the al Qaeda affiliate in Yemen said the group had directed the attack against Charlie Hebdo. In a statement in English provided to the AP, the member said "the leadership of AQAP directed the operations and they have chosen their target carefully." 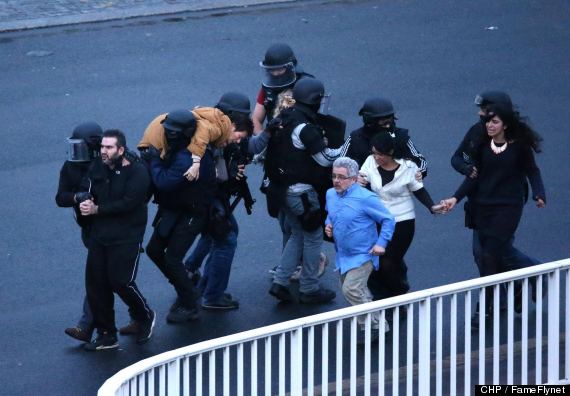 The deaths of Coulibaly and the Kouachi brothers came at the end of a tense day in France. Schools in the neighborhood of the kosher market were evacuated and authorities had ordered shops in a part of the Marais neighborhood to close. The highway around Paris was closed as well.

French President Francois Hollande addressed the nation in a televised speech on Friday evening. The president lauded the police who participated in the operations. "I want to tell them we are proud of you," Hollande said.

The president called the hostage crisis in Vincennes an anti-Semitic attack, and called on the country to remain united.

Hollande will participate in a unity march in the capital Paris on Sunday and has invited several heads of state to join him. British Prime Minister David Cameron, Italian Prime Minister Matteo Renzi and German Chancellor Angela Merkel have confirmed their attendance.

"In the streets of Paris, the world has seen once again what terrorists stand for," Obama said. "They have nothing to offer but hatred and human suffering." 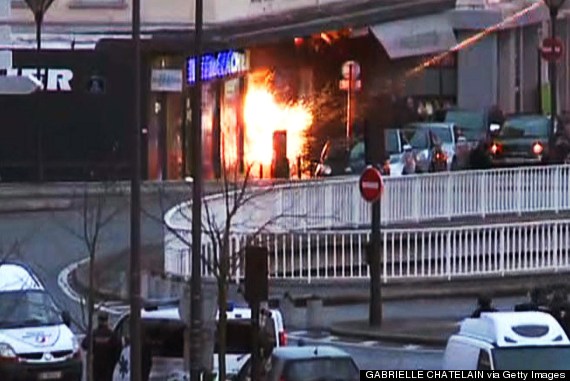 A screengrab taken from an AFP TV video shows a general view of members of the French police special forces launching the assault at a kosher grocery store in Porte de Vincennes, eastern Paris, on January 9, 2015.