CORCY, France, Jan 8 (Reuters) - Armed and masked anti-terrorism police swooped on woodland villages northeast of Paris on Thursday in a manhunt for two brothers suspected of being the Islamist gunmen who killed 12 people at a French satirical weekly.

A day after the Paris attack, officers carried out house-to-house searches in the village of Corcy, a few km (miles) from a service station where police sources said the brothers were sighted in ski masks. Helicopters flew overhead.

The fugitive suspects are French-born sons of Algerian-born parents, both in their early 30s, and already under police surveillance. One was jailed for 18 months for trying to travel to Iraq a decade ago to fight as part of an Islamist cell. Police said they were "armed and dangerous."

United States and European sources close to the investigation said on Thursday that one of the brothers, Said Kouachi, was in Yemen in 2011 for a number of months training with Al Qaeda in the Arabian Peninsula (AQAP), one of the group's most active affiliates.

A Yemeni official familiar with the matter said the Yemen government was aware of the possibility of a connection between Said Kouachi and AQAP, and was looking into any possible links.

In Paris, a policewoman was killed in a shootout with a gunman wearing a bulletproof vest on Thursday morning, setting a tense nation further on edge. Police sources were unable to say whether that incident was linked to the previous day's assault at the Charlie Hebdo weekly newspaper, but the authorities opened another terrorism investigation. 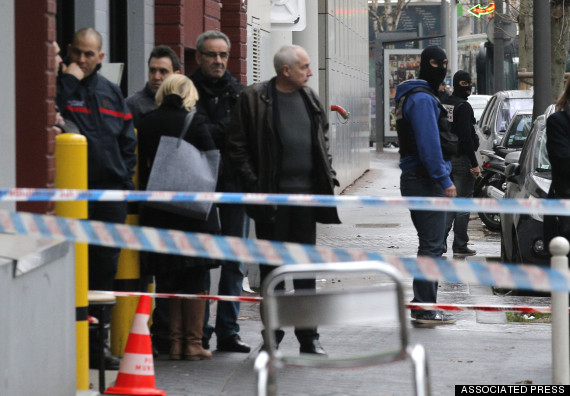 Hooded police officers stand at the scene after a shooting in Montrouge, outside Paris, Thursday, Jan. 8, 2015. (AP Photo/Christophe Ena)

Bewildered and tearful French people held a national day of mourning. The bells of Notre Dame pealed for those killed in the attack on Charlie Hebdo, a left-leaning slayer of sacred cows whose cartoonists have been national figures since the Parisian counter-cultural heyday of the 1960s and 1970s.

The newspaper had been firebombed in the past for printing cartoons that poked fun at militant Islam and some that mocked the Prophet Muhammad himself. Two of those killed were police posted to protect the paper.

While world leaders described the attack as an assault on democracy, al Qaeda's North Africa branch praised the gunmen as "knight(s) of truth."

Many European newspapers either re-published Charlie Hebdo cartoons or lampooned the killers with images of their own.

Searches were taking place in Corcy and the nearby village of Longpont, set in thick forest and boggy marshland about 70 km north of Paris, but it was not clear whether the fugitives who had been spotted in the area were holed up or had moved on.

"We have not found them, there is no siege," an interior ministry official in Paris said.

#CharlieHebdo on edge of a forest in the middle of nowhere as elite French police search for gunmen. pic.twitter.com/mgBNuZBJXa

Corcy residents looked bewildered as heavily armed policeman in ski masks and helmets combed the village meticulously from houses to garages and barns.

"We're hearing that the men could be in the forest, but there's no information so we're watching television to see," said Corcy villager Jacques.

In neighboring Longpont, a resident said police had told villagers to stay indoors because the gunmen may have abandoned their car there. Anti-terrorism officers pulled back as darkness fell. The silence was broken by the sound of a forest owl.

Thursday's shooting of the policewoman on the streets of Paris's southern Montrouge district -- whether related or not -- caused more fear. Montrouge Mayor Jean-Loup Metton said the policewoman and a colleague came under fire while responding to a reported traffic accident. Witnesses said the assailant fled in a Renault Clio. Police sources said he wore a bullet-proof vest and had a an assault rifle and a handgun.

A police officer at the scene told Reuters he did not appear to resemble the Charlie Hebdo shooter suspects.

Prime Minister Manuel Valls, asked on RTL radio whether he feared a further attack, said: "That's obviously our main concern and that is why thousands of police and investigators have been mobilized to catch these individuals." 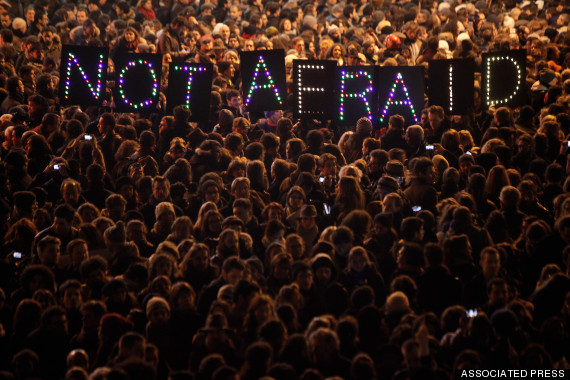 People gather in solidarity of the victims of a terror attack against a satirical newspaper, in Paris, Wednesday, Jan. 7, 2015. (AP Photo/Thibault Camus)

Police released photographs of the two suspects, Cherif and Said Kouachi, 32 and 34. The brothers were born in eastern Paris to Algerian parents who died when they were still children. They grew up in an orphanage in the western city of Rennes.

The younger brother's jail sentence for trying to fight in Iraq a decade ago, and more recent tangles with the authorities over suspected involvement in militant plots, raised questions over whether police could have done more to watch them.

Cherif Kouachi was arrested on Jan. 25, 2005 preparing to fly to Syria en route to Iraq. He served 18 months of a three-year sentence.

"He was part of a group of young people who were a little lost, confused, not really fanatics in the proper sense of the word," lawyer Vincent Ollivier, who represented Cherif in the case, told Liberation daily.

In 2010 he was suspected of being part of a group that tried to break from prison Smain Ali Belkacem, a militant jailed for the 1995 bombings of Paris train and metro stations that killed eight people and wounded 120. The case against Cherif Kouachi was dismissed for lack of evidence.

A third person wanted by police, an 18-year-old man, turned himself into police in Charleville-Mézières near the Belgian border late on Wednesday. A legal source said he was the brother-in-law of one of the brothers. French media quoted friends as saying he was in school at the time of the attack. In the wake of the killings, authorities tightened security at transport hubs, religious sites, media offices and stores. Police also increased their presence at entry points to Paris.

At Porte d'Orleans, one of the capital's main gateways, more than a dozen white police vans lined up the main avenue. Officers stood guard with bulletproof jackets and rifles.

The defense ministry said it sent 200 extra soldiers from parachute regiments across the country to help guard Paris. 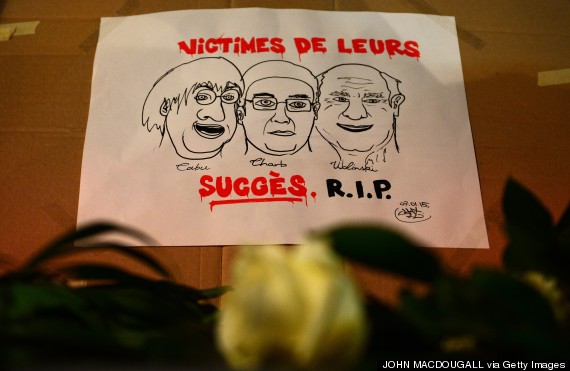 Flowers are placed around a poster depicting killed French cartoonists Cabu, Charb and Wolinski and reading 'Victims of their success' during a spontaneous vigil in front of the French embassy on Jan. 7, 2015 in Berlin (JOHN MACDOUGALL/AFP/Getty Images)

Tens of thousands of people attended vigils across France on Wednesday, many wearing badges declaring "Je suis Charlie" in support of the newspaper and the principle of freedom of speech.

Newspapers in many countries republished Charlie Hebdo cartoons. Britain's Daily Telegraph depicted two masked gunmen outside the doors of Charlie Hebdo saying to each other: "Be careful, they might have pens."

Charlie Hebdo's lawyer Richard Malka said the newspaper would be published next Wednesday with one million copies compared to its usual print run of 60,000.

Muslim leaders condemned the shooting, but some have expressed fears of a rise in anti-Islamic feeling in a country with a large Muslim population. The window of a kebab shop next to a mosque in the town of Villefrance-sur-Saone was blown out by an overnight explosion. Local media said no one was hurt.