You've got to love a guy whose ex-wife speaks well of him, and so, in crafting a speech to honor Charlie Rose, Gayle King, called her to get some anecdotes. King was not the only one at the podium. It takes three women to toast him, and so his co-anchors on CBS This Morning, King and Norah O'Donnell presented along with Yvette Vega. Even the gracious Richard Plepler in receiving his award, managed to contribute two impersonations in gathering information on Charlie Rose: Henry Kissinger and Bill Clinton. Wanting to keep "shalom bayit," Plepler thanked his wife. That and the hilarious John Oliver -- deploying tee shirt cannon jokes --made for an unusually warm and entertaining benefit for the Museum of the Moving Image. As John Oliver made clear, "It's worth going to Queens. It's not just an airport!" Fareed Zakaria complained about following John Oliver, and nicely held his own. 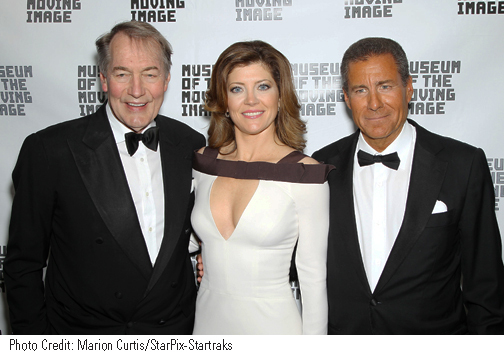 Richard Plepler is known for his instincts regarding programming: at HBO, he's responsible for having greenlit many beloved series including Boardwalk Empire, Girls, True Detective, and Last Week Tonight with John Oliver. HBO must be a happy place to work: Girls' Zosia Mamet with Evan Jonigkeit, Boardwalk's Steve Buscemi and wife Jo, Girls' Allison Williams, Real Sports' Bryant Gumbel, Sopranos' David Chase, attended the event as well as Bridget Lacombe, Allen Coulter and Claire Shulman, and many others. Great as this night was, celebrating a unique museum dedicated to movies, television, and digital media, everyone left the St. Regis sated, and got home in time to watch, what else, Charlie Rose.