Maybe he isn't really winning after all. Perhaps, things are more sad than bitching rockstar for Charlie Sheen.

The headline grabbing, outrageously acting star, who was fired from his hit show "Two and a Half Men" on Monday after weeks of ridiculous statements and insults hurled at its producers, showed a different side of himself to Life & Style Magazine. In their cover story this week, Sheen admits he's having serious troubles.

“I’m really starting to lose my mind,” he confessed to the magazine. "I’m ready to call anyone to help.”

Despite his wildly self-promoting and self-assured online and public appearances -- he waved a machete, drank tiger blood and declared war on Tuesday -- it's his struggle with ex-wife Brooke Mueller for custody of his children that's really got him down.

“She can’t keep them from me,” he said. “I won’t let her — I’ll do anything to get them back.” That may involve going to court, as the two continue their legal jostle.

While many onlookers have commented that Sheen, who claims to be clean, looks drugged or fried out, it may be depression that's getting to him.

“I’m really trying to contain myself right now,” Sheen said. “My lawyer wants to come over to my house and take the bullets out of my gun.”

Sheen has ranted against the public that judges him, news media and, most vehemently, against "Two and a Half Men" creator Chuck Lorre, whom he's threatening to sue.

For more, check out the new issue of Life & Style. 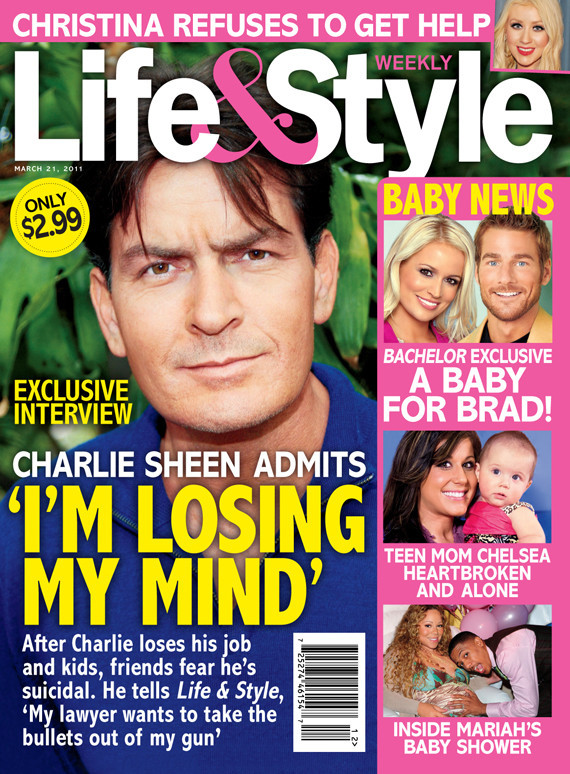