Be careful. A virus is spreading rapidly, primarily through Facebook, claiming that Charlie Sheen is dead.

The dangerous posts, which have also popped up on Twitter, typically start, "Exclusive Video," "RIP!" or "Breaking News." They go on to say "Charlie Sheen found Dead at his House" or some variation and include a link to a site that appears to be fueling the rumor.

Even ZDNet appeared to be victimized by the scam, tweeting yesterday, "Exclusive Video: Charlie Sheen found Dead at his House! http://zd.net/fOpMY2" That link now goes to a dead page. 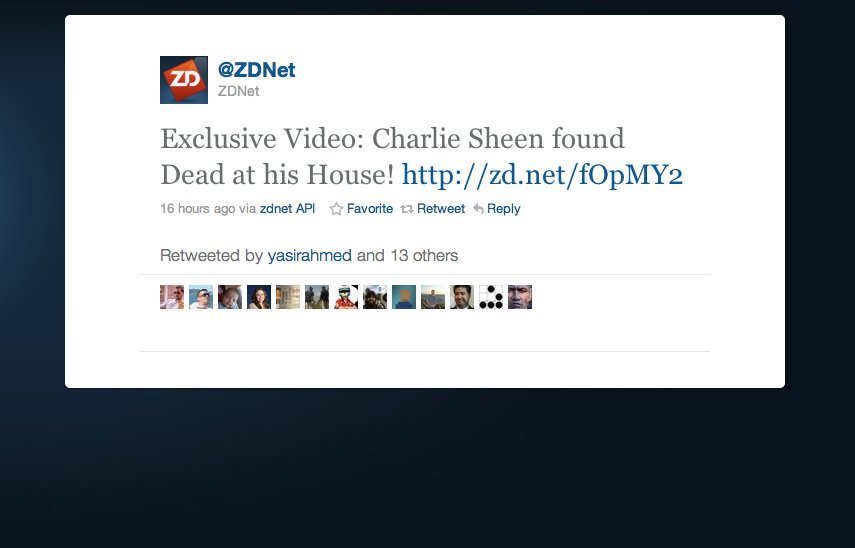 ZDNet later followed up with info on the virus. According to ZDNet:

Just like the previous “likejacking” scams (a play on the term clickjacking, which means prompting a victim to click something while a different action is taken behind the scenes) any of the above will lead you to a fake YouTube page such as TouTube or FbTube. Clicking on play prompts you with the following message: “Please complete a 30 second survey to verify that you are human.”

CNET reported that a number of the suspicious links seem to no longer work.

As of the time of this writing, Charlie Sheen has not yet addressed the rumor on his Twitter page.