Charlie Sheen and longtime girlfriend Brooke Mueller wed in an intimate ceremony at a private estate in Beverly Hills on May 30. Brooke, 30, in a Reem Acra gown, and Charlie, 42, exchanged their own vows in front of 68 guests.

The couple shared the special day with close family and friends: Charlie's parents, Martin and Janet Sheen, brothers Ramon and Emilio Estevez and Emilio's fiancée, Sonja Magdevski, and Charlie's three daughters were on hand for the ceremony. "We're in love with both of them," Janet tells OK!. Lisa Joyner, wife of Charlie's TV co-star Jon Cryer, and Grey's Anatomy's Eric Dane and his wife, Rebecca Gayheart, were also in attendance. Brooke's friend Dreamgirls star Sharon Leal sang the Beatles tune "Let It Be" during the reception.

Charlie, how does it feel to be married? It feels great. We were so excited when we got home we couldn't go to sleep. [There was] a lot of adrenaline and excitement.

Would you say the third time's the charm for you? Yeah, but I was telling a couple of friends last night that this feels like my first real marriage. The first one was a show, the second one was a con, and this one is the real deal. 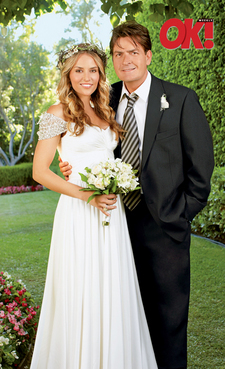 Charlie, why did you go to Men's Wearhouse for your wedding suit? I like their commercials a lot! I got tired of $3,000 suits falling apart in the middle of certain events. I didn't wear a tux because they're hot and they don't breathe.

Are you planning to start trying to have a baby right away? Charlie: That's the plan. Brooke: There's a rumor I'm pregnant, and I'm not.

Charlie, what do your daughters think about Daddy getting married? They're very young, but they were excited. They claimed they wanted to look as pretty as Brooke. They absolutely adore her.

How difficult was it hearing the comments your ex-wife Denise Richards made in the media on the eve of your wedding? I'm so tired of talking about her and all her shenanigans. It is what it is. I don't even care anymore. I'm going to take a stand to basically never utter her name publicly again, and I think if that's known, it will put an end to some of the drama.

More pictures and details in the OK!, on sale this week.