Charlotte Brontë was only 10 years old when she penned her earliest known work, and she was barely a teenager when she began writing in earnest -- at her own count she had written over 20 complete works by the time she was 14.

One list, which she has headed Catalogue of my Books with the periods of their completion up to August 3, 1830, gives 22 titles, including A Book of Rhymes, which, now lost, apparently contained 10 poems. She has made a few errors and omitted the titles of at least eight manuscripts, though -- so the actual count of what this young, prolific writer had composed by 1830 is closer to thirty works. Penned in a tiny but still legible hand, Brontë has written the list on a sheet of paper that measures just over four inches -- about the length of a golf pencil. It is shown here at its full dimensions: 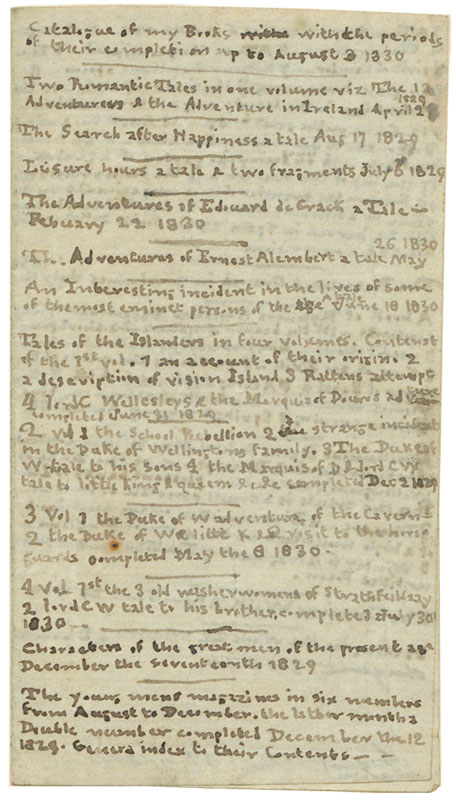 Shown below is a detail of the top third of the page. Her miniscule handwriting is very precise, and she has confidently dated the third title, Leisure Hours, a Tale; and two fragments, to July 6, 1829. But Brontë was working from memory when she compiled the Catalogue, and the manuscript of Leisure Hours actually dates to June 29, 1830, nearly a year after her remembered date and only a few months before she wrote this list. Perhaps she merely recalled writing it in the summer, or simply misprinted the year. And how could this 14-year-old girl have known that we would be pouring over her Catalogue, which at the time she could only have imagined would be seen by her family, or which she perhaps wrote out only for her own use, over 180 years later? 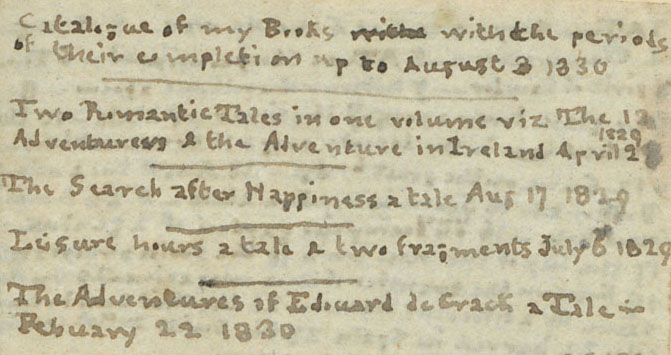 The thought of some future scholars scrutinizing her juvenilia might have seemed even more unimaginable after she received a letter in 1837 from poet laureate Robert Southey (the twenty-one year old had written to him for advice about her poems), where he tells her that:

Literature cannot be the business of a woman's life: & it ought not to be. The more she is engaged in her proper duties, the less leisure she will have for it, even as an accomplishment & a recreation. To those duties you have not yet been called, & when you are you will be less eager for celebrity.

Brontë later explained that she and her sisters "had a vague impression that authoresses are liable to be looked on with prejudice" -- an unsurprising view for the age, and one which must have been particularly driven home by the poet laureate's letter. But in 1837 Southey did not expressly tell her to stop writing, and she was still as prolific (maybe even compulsive?) a writer as she had been as a teen. Her writing became her means of support, but she clearly wrote for more than that and the volume of her work from such a young age suggests to me that she was driven by that inexplicable itch to put pen to paper. In any case, we are lucky that she did not take heed to Southey's hints, and ten years later the ever-determined Brontë published Jane Eyre, albeit under the ambiguously gendered pen name Currer Bell.