This is the eighteenth installment in an ongoing series that explores drag culture and the nightlife scene in Brooklyn, N.Y. Over the past several years, following the large-scale exodus of artists across the East River and into northern Brooklyn, those engaged in drag culture in this outer borough have created a new, queer world entirely their own. Accompanied by a larger movement to understand drag culture outside of the pageant circuit, many individuals engaged in the drag community in this borough approach drag culture through a nontraditional lens of "alternative" drag or performance art, enabled largely by the malleable and queer nature of this part of New York. Visit HuffPost Gay Voices regularly to learn not only about the individuals involved in Brooklyn's drag community, but more about the culture of the community itself.

The Huffington Post: How did you get your start in the drag world?
Charmin Ultra: Akron, Ohio, probably around 1995. I found my Mother's lipstick and it all went downhill from there. Then came [performance ensemble] Backspace. I met the most wonderful group of people while in the dance program at Ohio State. Back then, it was a much larger group and then we made the transplant to NYC and formed this wacky, performance-driven ensemble including myself, Mary Jo Cameltoe, Lil' Kimchi, The Duchess Tickles, Whisky Dixie, and Cherry Poppins. Krystal Something Something was at the helm with loads of collaborations from us all. We would get together in his living room and bust out a brand new show every Sunday at Sugarland for Sunday School with Backspace. The whole thing felt like a glitter-induced, blood rushing, music thumping dream.

Describe the drag scene and community in Brooklyn -- how is it different from drag culture elsewhere?
It's a playground. The fastest spinning tire swing of all. It is indeed a community, of ruthless, glamorous, beautiful artists celebrating the sheer fact that everyone survived last night. It's a wild roller coaster. I would not get back on for a regular ride, but man am I glad I got to go for a spin. It's like summer camp -- you form a bond with the people around you, all who have chosen to put themselves into the environment. No resume needed to be a part of this business, just a drive to create -- the rest is in the pudding.

What role do you see drag culture playing in the trajectory of the changing landscape of Brooklyn itself?
The two are changing simultaneously. The drag culture itself is driven by the changing landscape of people who move to or make work in Brooklyn. As more and more queer artists find their home in this beautiful borough the drag culture is becoming more dense and saturated. I spoke of the roller coaster in the last question, while I was emphasizing the party culture that goes hand in hand with drag it is also about amazing performers busting out original material on a regular basis. The Brooklyn Queer Art Scene Community of People Playing Around on Stage and in Bars and Stuff (that's an official term) is growing!

You're involved with "Sez Me," a web series that aims to break down the stigma of children being exposed to the LGBT community. What have your experiences been like surrounding this?
I was so excited when Mor Erlich asked me to hop on board with "Sez Me." For most of my drag life I have explored gender as a character in a nightclub setting. Nightlife is a great place to do this, raw and artistic, bubbling with people expressing themselves in so many ways. Although, as time went on, I was searching for another platform to explore identity and gender and this was the perfect way. Giving the younger generation the space to learn about and explore identity will hopefully allow for greater acceptance and understanding of themselves and the people around them.

Being human is fluid. When it comes down to it we are all the same pizza crust, each with our own combination of toppings (I identify as sausage, green peppers and onions).

Through "Sez Me" I hope to give the younger generation a reference I did not have growing up. I want to empower them to ask questions and not be afraid to express who they are. It is important because young people should be treated with respect and allowed knowledge of things that exist in this world. I want to help people understand that gender and sexual preference are not subversive decisions a person makes in a back alley. I want to emphasize the amount of love in the world and that everyone has the space to give and receive it.

How would you characterize the kind of drag that you do?
[Imagine] if Britney Spears were 70 years old, had a flare for absurdity and really thick eyebrows. I do the kind of drag that could go horribly wrong at any moment. I am a sucker for improvisation. It's like in the TGIF sitcoms when they would be on their way to Disney World, but couldn't make it because the house flooded or Mark wrecked the car or Michelle got Amnesia (f*cking horse), then the whole thing plays out and ends on a heartwarming note. That's the kind of drag I do.

What does it mean to you to be a drag queen or a drag performer? Do you consider what you do to be drag at all?
I do drag because it's gay and it's proud. Drag is the bridge. It lives in the absurd. Drag queens are the mascots of the queer community. We take something as complex as gender and show the world that the whole idea is grounded in perspective. We are not afraid to freak people out, we welcome scrutiny, we make fun of ourselves. We are like getting to know you games for people who have never seen a queer thing in their life. We are easy.

Where can you be found throughout the week?
Tortilleria Tres Hermanos on Starr and Wyckoff. I do a weekly show there called Lunch. It is mostly just me and my friend Jeremy Bennett eating tacos, but feel free to come hang out and eat with us.

Any parting words?
Take the part you least like about yourself, dress it up and show it off, make it beautiful. 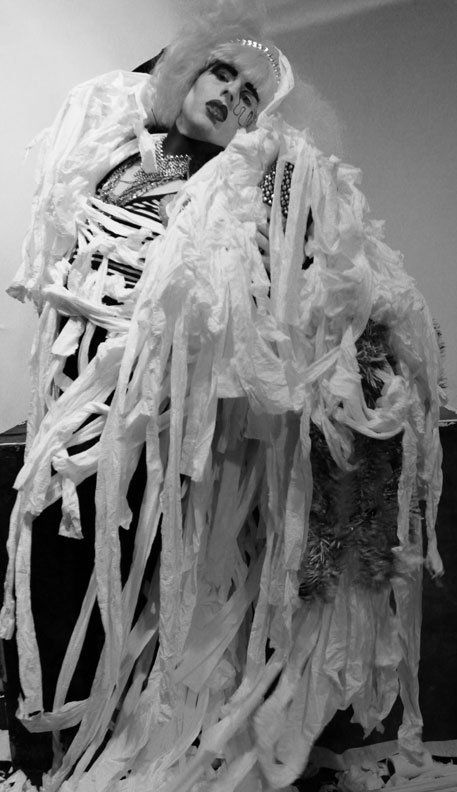