Keeping kosher for Passover may be a little more bearable this year, at least in Israel. The mensches over at Ben and Jerry's released a charoset-flavored ice cream that, thankfully, has all the credentials to be eaten over the Jewish holiday.

For those who are unfamiliar, charoset is a traditional dish consumed at the Passover Seder. It is typically made from finely chopped apples, walnuts, cinnamon and sweet red wine. It's meant to symbolize the mortar used by Israelites to make bricks while they were slaves in Egypt. Despite its dark historical reference, charoset is pretty tasty. 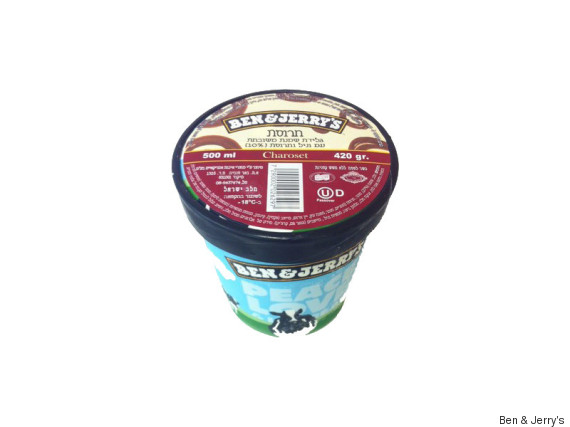 According to Avi Zinger, a long-time Ben and Jerry's licensee in Israel, many of Israel's supermarket shelves are rid of non-kosher products four weeks before Passover begins. Around the holiday, Ben and Jerry's Scoop Shops limit their flavors to about 10 varieties (they temporarily nix the non-kosher selections) and include a special, limited-edition batch flavor. This year's is charoset.

"This is a very busy time in the stores," Zinger wrote in a statement emailed to The Huffington Post. "People are coming in and are very upset to see such a small selection. We usually add another special flavor for the holiday. We have been doing this for many years." The first special flavor featured in Israel's Scoop Shops was Vanilla Matzoh Crunch, which mixed chocolate covered matzoh with pure vanilla ice cream.

This year's charoset flavor earned extra attention because, in addition to being served in the Scoop Shops, the clever treat was also packaged in pints. The magic that is social media came into play, too. According to Zinger, "The news started to surface when a customer put a picture of the pint on Facebook, a Jewish newspaper in the US put a
post on their Facebook, and then the American Ambassador in Israel posted in on Twitter." Ah, the power of social media and an annually-eaten Jewish delicacy.

Zinger reported only a few hundred charoset pints are left out of the near 4,000 originally produced. He's confident that the remaining pints will sell out before Passover begins later this week. Since the flavor is only available in Israel, we weren't able to spoon ourselves a taste.

Elli Fischer tried the ice cream in 2012, before it was available in pints, described it as "quite tasty" but lacking in its charoset taste. "From what I can tell, it’s vanilla-based with apples and cinnamon, and lots of walnuts," he wrote for The Times Of Israel.

If the idea of charoset ice cream is tickling your fancy beyond belief, you might try concocting your own this Passover season by mixing your favorite, kosher-for-Passover vanilla ice cream with your Bubbe's charoset. She always makes too much anyway, doesn't she?