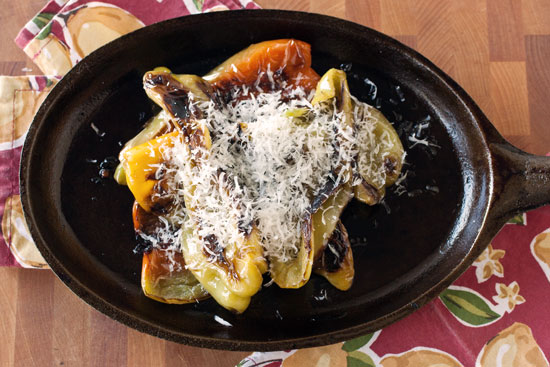 Casey loves the Mets, Pittsburgh, and all things food, which she writes about on Good. Food. Stories. She's sharing her heritage and authentic Italian recipes as our Italian Fanatic.

Despite its significant presence in my childhood, this exceedingly simple dish with three ingredients -- sweet peppers, olive oil and Parmesan cheese -- curiously seems to have been taken for granted by culinary history.

With peppers of all shapes, sizes and heat levels growing in abundance throughout Italy, they've historically been cooked every which way: roasted, fried, grilled and stuffed with ingredients ranging from tangy cured tuna to salty olives to goat cheese and buttery breadcrumbs, like this stuffed mini peppers recipe. But somehow this particular combination -- so elementary it barely needs a recipe -- has been nearly lost to written history. I needed to change that.

Just beyond Johnstown city limits, in the small mining town of Windber, the longstanding family restaurant Rizzo's was on the regular rotation for our meals out when I was a kid. And every single time we went to Rizzo's, as far back in my memory as I can dig, a few plates of these juicy, tender peppers were passed around the table. Listed on the menu as "fried sweet peppers," the appetizer was deceptively rich in flavor. Shallow-fried in a cast iron skillet, the peppers soaked up the olive oil that blistered and charred their skins, then received lavish handfuls of grated Parmesan that blanketed the pepper heap.

My step-mom, who wrangled the recipe away from one of the Rizzo family members, recalls that not even a clove of garlic was thrown into the olive oil with the peppers -- though they might have been sprinkled lightly with salt and pepper, no other seasonings interfered with the taste. 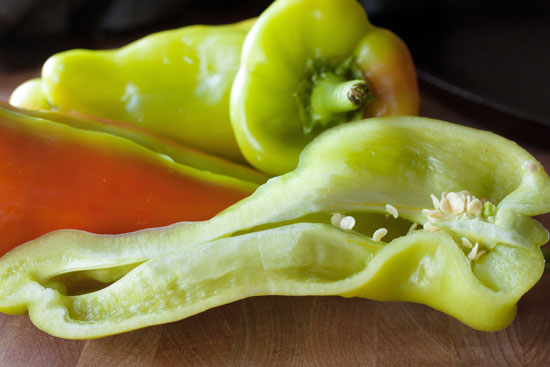 At home, it's almost so easy to recreate this family favorite that I'm constantly shocked more people aren't eating it with gusto. All you need is a seasoned cast iron skillet to give your peppers the char of a lifetime.

When grocery shopping, look for Italian frying peppers: long peppers in varying shades of green ranging from citric neon with blotches of orange to deep forest. They look like poblano peppers, but they're sweet like a bell pepper instead of spicy (and you can certainly use poblanos for this recipe too, but you'll be ratcheting the heat level up significantly!) Grab the least gnarled peppers in the bunch, since you'll want to have as much of the pepper's surface area touching the skillet as possible when frying.

Have a skillet-fried pepper recipe you remember from your culinary history? Do you recall eating this dish with your family? I'd love to hear your story in the comments.

Looking for the perfect main to pair these peppers with? Try Casey's Lamb Loin Chops Recipe!

makes 2 side dish or appetizer servings